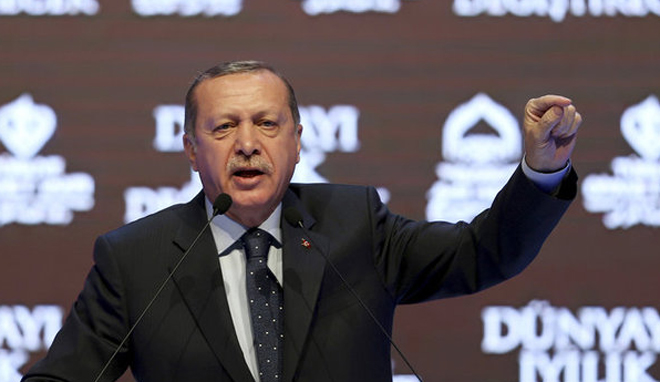 President Recep Tayyip Erdogan on Sunday invoked the “one nation, two states” slogan in throwing his and Ankara’s unequivocal support to Azerbaijan and its leader, President Ilham Aliyev. He also called on the people of Armenia to topple the Nikol Pashinyan government.

“While I call on the Armenian people to take hold of their future against their leadership that is dragging them to catastrophe and those using it like puppets, we also call on the world to stand with Azerbaijan in their battle against invasion and cruelty,” Erdogan said on Twitter, adding that Turkey will “increasingly continue” its solidarity with Baku.

“By attacking Azerbaijan yet again, Armenia has once more demonstrated that it is the largest threat to peace and tranquility in the region. The Turkish nation with all its capabilities is today, as always, stands with its Azerbaijani brothers,” Erdogan said on Twitter.

“In our phone conversation today, as I once again witnessed the acumen and decisiveness of Azerbajian’s president Ilham Aliyev, I told him Turkey, with the understanding “one nation, two states,” will continue strengthening its solidarity with its Azerbaijani brothers,” added Erdogan.