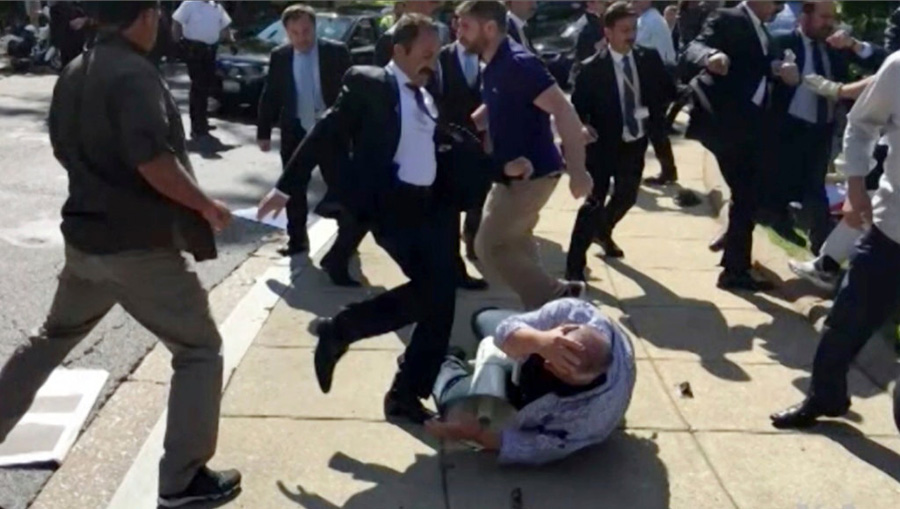 The Armenian National Committee of America said it was encouraging members of Congress to sign their names to letters being sent to the U.S. State Department and the District of Columbia’s Metropolitan Police Department raising concerns ahead of Mr. Erdogan visiting next week for the first time since the brawl.

The letters will urge both the State Department and MPD to ensure that Mr. Erdogan and his security detail “are aware of and understand that Americans enjoy First Amendment rights to assembly and speech,” according to the ANCA, the nation’s largest advocacy group for Armenian-Americans.

“We are encouraging legislators, in the House and Senate, to join this bipartisan defense of our First Amendment freedoms, and will – next Wednesday – exercise our Constitutional rights by protesting Erdogan’s violence –at home and abroad, including right here in our nation’s capital,” ANCA Executive Director Aram Hamparian said in a statement.

The letters are being led by Rep. Dan Crenshaw, Texas Republican, and will be sent to the State Department and MPD before President Trump hosts Mr. Erdogan at the White House on Wednesday, according to the ANCA.

A communications director for Mr. Crenshaw, a Navy veteran and member of the House Committee on Homeland Security, confirmed the congressman’s involvement when reached by The Washington Times and said that more details would be announced shortly.

Video recorded during the Turkish president’s last trip to D.C. in May 2017 captured several peaceful protesters being attacked as they demonstrated near the ambassador’s residence being while Mr. Erdogan was inside.

The U.S. House of Representatives unanimously passed a resolution the next month calling for the assailants to face criminal charges, and 19 defendants —including 15 identified as members of Mr. Erdogan’s security detail — were ultimately indicted in connection with the clash. Two Americans pleaded guilty to related felony assault charges in 2017. The Department of Justice later dropped charges against most of the other defendants last year.