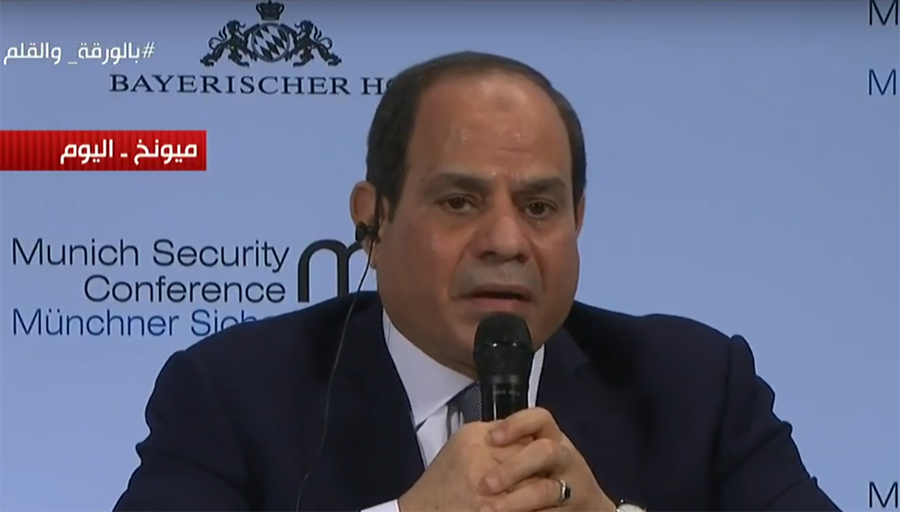 (Armenpress) – Egypt’s President Abdel Fattah el-Sisi has briefly talked about the Armenian Genocide during a speech at the Munich Security Conference, however, President el-Sisi avoided to use the actual term “genocide”. The president used the word massacres.

Egypt has not formally recognized the massacres of Armenians committed by Ottoman Turks in 1915 as genocide.

Talking about migrants and minorities, as well as terrorism, the Egyptian president emphasized that over 100 years ago his country accepted and gave refuge to survivors of the Armenian Genocide. However, he did not speak about what had led to the Armenians being scattered all over the world, including to Egypt.

The Armenian National Committee of Egypt has labeled el-Sisi’s statement as a “pre-step” towards recognizing the Armenian Genocide.

“True, although the Egyptian president did not use the term “genocide”, he did however make the first step in this direction, by seeing the need for mentioning it in light of current realities,” the Armenian National Committee of Egypt said in a news release.

“Initially he spoke about Egypt having accepted Armenian refugees, however he did not speak about the reason. The Armenian National Committee of Egypt commends this step of the Egyptian president, assessing it not only as a pre-step towards recognizing the Armenian Genocide, but also as the Middle East’s and Northern Africa’s main actor’s positive response and vow to join the civilized initiative of the Republic of Armenia on preventing and banning future genocides.

We join our voice to President el-Sisi, demanding to hold to account those who encourage terror organizations and  those who shatter peoples’ fates”.