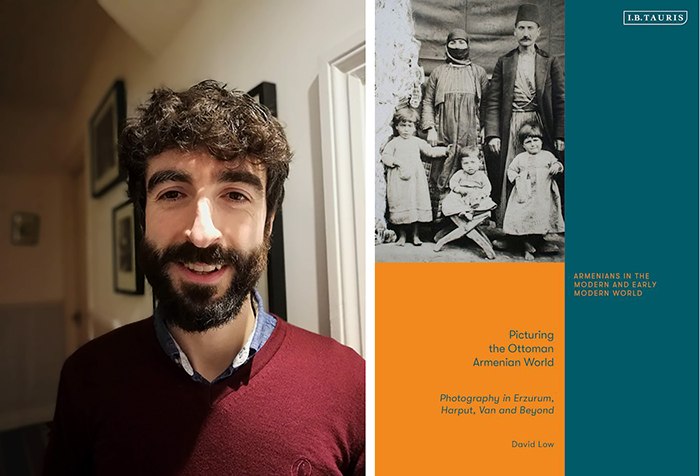 I. B.Tauris, an imprint of Bloomsbury Publishing, has announced the publication of Dr. David Low’s book Picturing the Ottoman Armenian World: Photography in Erzerum, Harput, Van and Beyond as part of the series Armenians in the Modern and Early Modern World.

The Armenian contribution to Ottoman photography in the last decades of the empire has been well-documented. Studios founded and run by Armenian Ottomans in Istanbul contributed to the exciting cultural flourishing of Ottoman ‘modernity’, before its dissolution after World War I. Less known however are the pioneering studios from the east in the empire’s Armenian heartlands, whose photographic output reflected and became a major form of documenting the momentous events and changes of the period, from war and revolution to persecution, migration and ultimately, genocide.

This book examines photographic activity in three Armenian cities on the Armenian plateau: Erzurum, Kharpert and Van. It explores how indigenous photography was rooted in the seismic social, political, and cultural shifts that shaped Armenian lives during the Ottoman Empire’s last four decades. Arguing that photographic practice was marked by the era’s central movements, it shows how photography was bound-up in Armenian educational endeavors, mass migration and revolutionary activity. Photography responded to and became the instrument of these phenomena, so much so that it can be shown that they were responsible for the very spread of the medium through the Armenian communities of the Ottoman East and the rapid increase in photographic studios. Contributing to growing interest in Ottoman and Middle Eastern photographic history, the book also offers a valuable perspective on the history of Armenians in the Ottoman Empire.

“Like many works with an Armenian focus, this is a book written in response to absence. Armenians are widely acknowledged as being central to photography in the Ottoman Empire, and yet the stories of Armenian photographers, their lives and their images, remain largely unwritten,” Dr. Low said. “However, rather than produce a history of photography in the conventional art historical mode, my aim has been to write what might be termed a photographic history, a history that uses the lives of photographers and, moreover, their subjects and images as a means of entering and exploring a wider history of Armenians in the Ottoman East,” he continued. “While written in response to absence, the book endeavors to avoid the prevalent notion of photographs as the vestiges of a lost world. It approaches them instead as the creations of a vibrant world and the products of lives being lived. Its central preoccupation is how we might write productively about photographs and what sort of histories might be produced when we closely study, scrutinize and converse with them.”

“Low provides a ground­breaking study of photography from a neglected region of the Ottoman Empire. He tells the compelling story of multi-generational Armenian families of photographers, whose work was long believed lost in the 1915 genocide. An important contribution to both the history of photography and the social history of Ottoman Armenians.” Armen T. Marsoobian, Southern Connecticut State University, USA

Professor Bedross Der Matossian (University of Nebraska, Lincoln), series editor of the Armenians in the Modern and Early Modern World noted: “We are extremely happy to publish David Low’s book. It is well known that Armenians have played a dominant role in introducing photography to the Middle East in the 19th and the 20th centuries. Low’s book is a sophisticated analysis that incorporates the history of Armenian photography in central cities of historic Armenian with the major political and socio-economic transformations that took place in the Ottoman Empire. The book will have a lasting impact on the ways in which scholars will view Armenian contribution to photography.”

Dr. David Low is a photographic historian focusing on the Ottoman Armenian world and the place of photography in Armenian lives, as well the wider intersections of photography, migration and exile. He was awarded his PhD by the Courtauld Institute of Art, University of London.