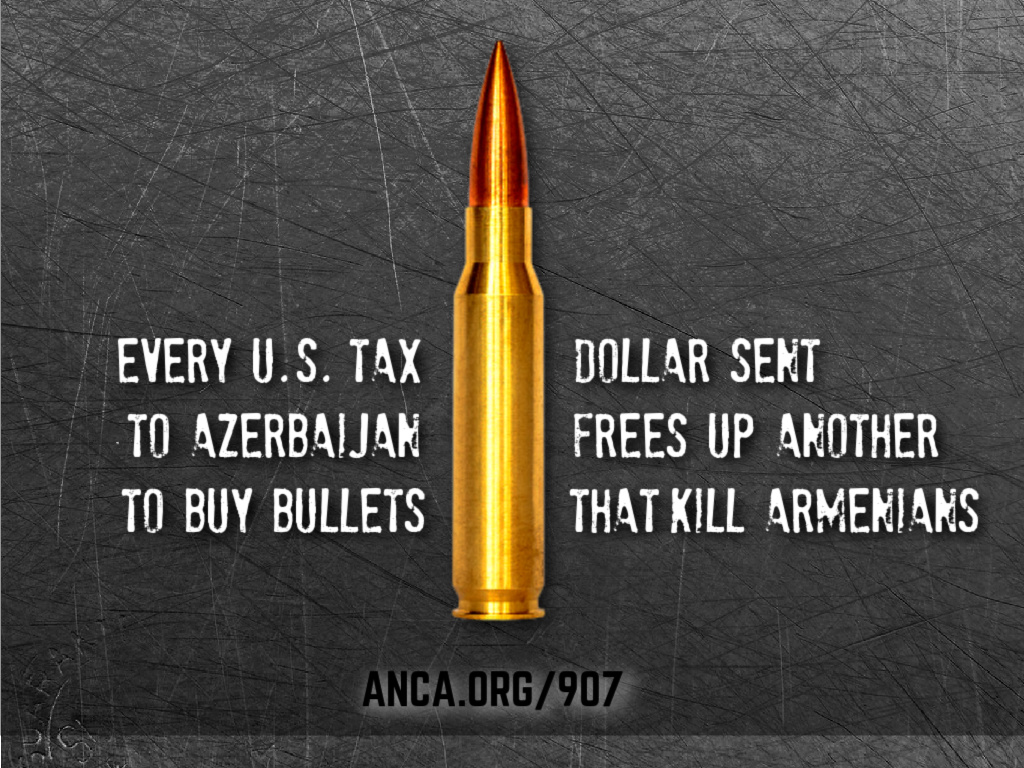 “The rapid Congressional condemnation of Azerbaijan’s attack on Armenia needs to be followed by the immediate cessation of all U.S. arms and aid to oil-rich Azerbaijan’s corrupt and violent Aliyev regime,” stated ANCA Executive Director Aram Hamparian.  “Today – more than ever – it’s clear that Azerbaijan deserves the harshest of sanctions, and not another U.S. tax dollar.”

The ANCA has issued a nationwide call to action – anca.org/907 – calling on President Biden and Congress to: 1) condemn Azerbaijan’s latest attack against Armenia; 2) zero-out all appropriations or authorizations of U.S. aid to Azerbaijan; 3) enact statutory restrictions on U.S. military aid to Baku; and 4) strike or significantly tighten the waiver provision of Section 907.  Similar efforts have been launched by the network of Armenian National Committee offices worldwide.  The Hellenic American Leadership Council immediately posted a statement of solidarity with the ANCA against Azerbaijani aggression.

Senate and House leaders demanded clear U.S. leadership and Azerbaijani accountability. “Deeply concerned by reports of Azerbaijani attacks on Armenian territory,” stated Chairman Menendez in a Tuesday evening tweet. “Shelling Armenian towns & innocent civilians is illegal & unacceptable. The world must stand up to authoritarian brutality. The US must end all security assistance to Azerbaijan now.”

House Intelligence Committee Chairman Adam Schiff (D-CA), concurred, noting “Azerbaijan has reportedly shelled the homes of innocent civilians in Artsakh and is now attacking Armenia’s border.  An egregious violation of the ceasefire and direct attack on Armenia’s sovereignty. The U.S. must halt all assistance to Azerbaijan – immediately and permanently.”

Outraged by reports of heavy & coordinated Azeri artillery strikes on peaceful Armenian towns, Armenian Caucus C-Chair Jackie Speier (D-CA), who is of Armenian heritage, explained: “To be clear: these are internationally recognized Armenian towns, NOT disputed territory. It’s unconscionable that the US continues to provide Aliyev w/ military aid.”

Central Valley California Congressman David Valadao (R-CA), a Republican co-chair of the Armenian Caucus noted, “I strongly condemn this unprovoked attack on Armenia. The pattern of ongoing aggression from Azerbaijani forces is unacceptable and must end immediately.”  Fellow Central California Congressman Jim Costa (D-CA) demanded Azerbaijani accountability.  “I condemn Azerbaijan’s unprovoked attack on Armenia. My heart goes out to the people of Armenia and I stand strong with them. Azerbaijan has been unwilling to comply with the peace process and we must hold them accountable,” stated Rep. Costa.

At about 12:05 am on September 13th, Azerbaijani forces launched a heavy artillery attack using mortars and drones on Armenian military and civilian infrastructure in Sotk, Vardenis, Goris, Kapan, Artanish, and Iskhanasar, located on Armenia’s eastern border with Azerbaijan. The number of casualties and wounded has not yet been confirmed.  The attack is the largest on Armenian territory since the 2020 Turkey and Azerbaijan-led 44-day war against Artsakh and Armenia, which claimed over 5000 Armenian lives.

While Congressional reaction decisively condemned Azerbaijani action, statements from U.S. State Department stopped short of unequivocally condemning President Aliyev’s actions.  “The United States is deeply concerned about reports of attacks along the Armenia-Azerbaijan border, including reported strikes against settlements and civilian infrastructure inside Armenia.  As we have long made clear, there can be no military solution to the conflict.  We urge an end to any military hostilities immediately,” stated Secretary of State Antony Blinken.