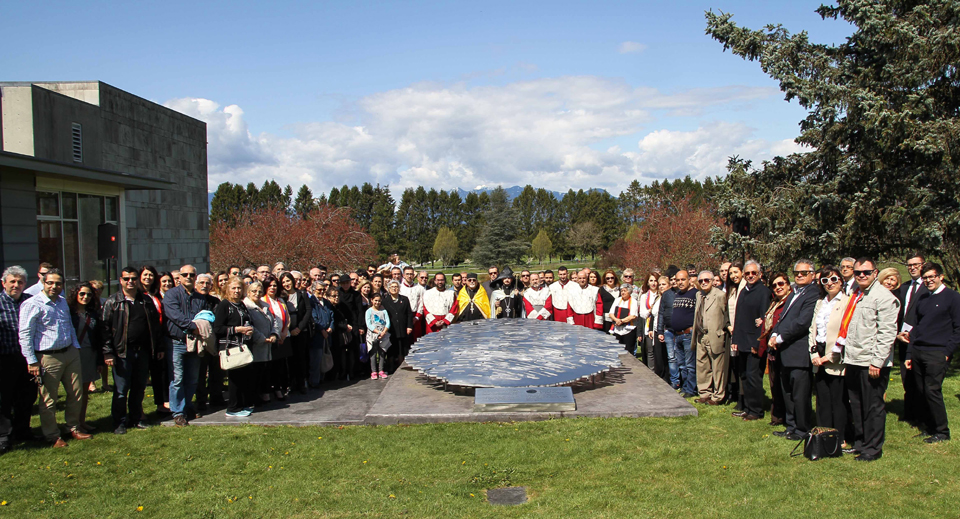 Mistress of Ceremonies Mrs. Eliz Attarmigirian began the commemoration by leading the audience renditions of the national anthems of Canada and Armenia.

She then invited Mr. Hagop Deragopian, who first acknowledged the ongoing youth-led protests in Armenia and the hope for peaceful discussion and compromise.

He then read statements from:

Dr. Jordan described the mission, the history, the operation, and the successes to date of the ABMDR, which has enlisted over 30,000 Armenians worldwide and helped many people, Armenian and non-Armenian, get life saving bone marrow transplants.

Dr. Jordan stressed the important volunteer-led work of ABMDR, and its main chapters in Los Angeles, Boston and especially Yerevan. Every life saved, Armenian and non-Armenian, is a precious gift to us all, and only possible when there is a matching donor.

The community responded generously to Dr. Jordan’s presentation and invitation and many of the eligible donor-aged attendees (18-50) signed up and registered as donors.

Three youths from the community, Ms. Palig Doghramadjian (newly arrived from the Middle East), Mr. Haig Basmadjian (born and raised in Canada), and Ms. Maryam Garabedian (raised in Canada, daughter of a priest), took to the stage and gave poignant stories describing their own feelings of what the Genocide means for them, and how it has shaped their life’s arc.

MC Attarmigirian then invited guest Carmel Tanaka, Community Relations Manager for the Centre for Israel and Jewish Affairs (CIJA), who reflected on the shared experiences and suffering and rebirth of the Armenian and Jewish nations. She informed the audience that CIJA is joining with the Armenian community and others to prepare to put in action Motion M587 and commemorate April 2019 in Vancouver with multiple communities as Genocide Remembrance, Condemnation and Prevention month.

The commemoration concluded with the screening of the touching short film “Born in Adana” presented by Director David Hovan, and narrated by his uncle the long serving Deacon of St. Gregory Church, the late Antranig Teghararian.