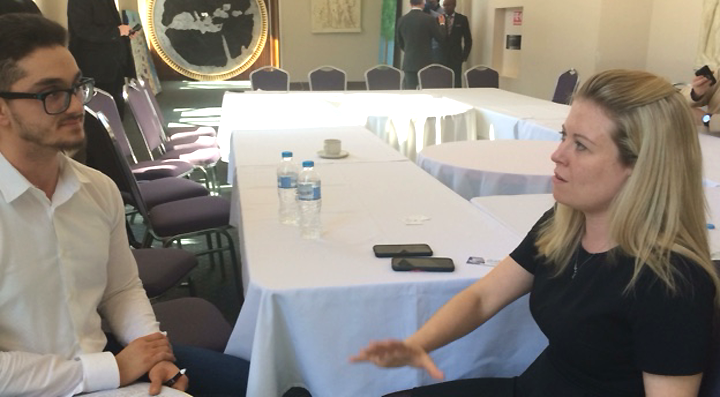 In early April, Horizon Weekly was invited, along with other local ethnic media organizations, to assist in a round-table with Conservative MP of Canada Michelle Rempel and Conservative Senator Leo Housakos on topics relating to immigration, integration, and other federal issues.

Sen. Housakos began by emphasizing the importance of ethnic media in contributing to Canadian democracy and federalism. He stressed the need for more government engagement with such organizations, which are often the primary and even only source of news and information on Canadian politics. Clearly wanting to set a contrast with the Liberals, he and the MP criticized a $600 million package of tax credits recently passed by the Liberal government to aid the media industry, hinting instead that perhaps that investment should be directed towards local and ethnic media organizations.

Moving on to immigration, Michelle Rempel, also the Conservative critic for Immigration, Refugees and Citizenship, outlined the Conservative strategy on the issue as one of balance: balance between what she describes as the ‘no-immigration’ sentiment espoused by former Conservative MP and now leader of the People’s Party of Canada Maxime Bernier, and what she perceives to be an ‘open-borders’ approach to immigration, legal and illegal. In practice, she noted, a balanced approach to this issue means that Canada should ultimately prioritize a fair, orderly and compassionate immigration system.

To that effect, she made a point about placing fairness and compassion at the heart of any such framework. On numerous instances, she reiterated the Conservative Party’s support for immigrants, diversity, and pluralism, preempting any suggestions of ideological alignment with the Trump administration in the United States. At the same time, the Liberals’ approach to the issue, according to the MP, at best lacked fairness and a coherent structure. Why should refugees from upstate New York be able to cross illegally into Canada to seek asylum when others are sometimes even left on waiting lists for 10+ years seeking entry into the country, she rhetorically asked.

When pressed on that note, she referred to the Safe Third Country Agreement, an accord signed by Canada and the U.S. in 2002 which stipulates that refugees must apply for asylum in the first country they arrive in, and which designates both destinations as “safe countries”. This framework did contain a loophole, however, as migrants could cross between official points of entry and then claim asylum, a phenomenon which became more commonplace in 2017-2018 as the Trump administration announced the end of programs offering relief to some Haitian and Nigerian refugees already in the United States. The resulting backlog and ballooning waiting lists, she maintained, have undermined Canadian confidence in our immigration system, giving rise to more anti-immigrant voices. While Rempel said crossing between points of entry should be actively discouraged, it remains to be seen, though, how specifically a potential Conservative government would go about addressing these loopholes.

Much of the round-table was dominated by questions concerning integration, particularly the Quebec secularism bill. Some media outlets asked the MP and the Senator about their views on the new law proposed by the Legault government. Both made explicit their fervent opposition to the bill, pointing to Conservative leader Andrew Scheer’s statement that a Conservative government would not consider such a bill at the federal level. Michelle Rempel, in particular, spoke about the need to foster self-sufficiency and a civic sense of Canadian identity among immigrant communities, as opposed to (as she described) punishing them for their religious faith.