Canadian Armenian Photographer Shares His Office With a Forest 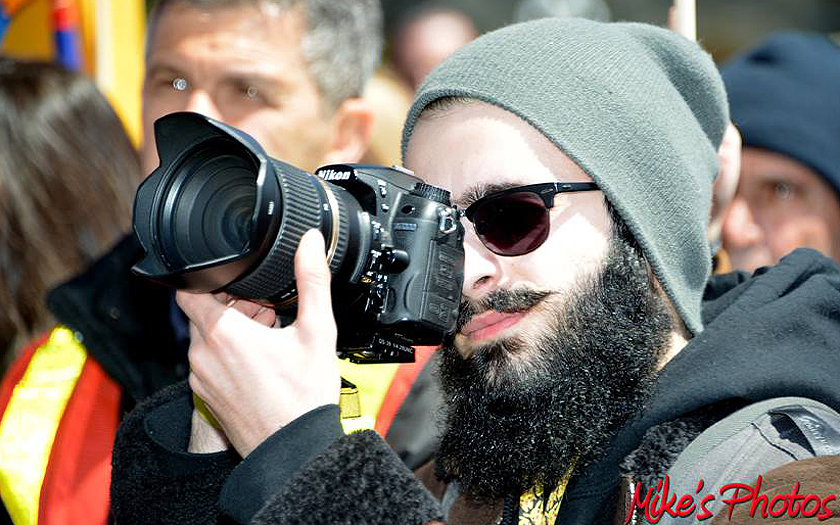 Ghazarian graduated from disposables to using his dad’s old Canon, first as a hobby then to volunteer for a Montreal-based Armenian newspaper called Horizon Weekly. (His father, Sako Ghazarian, had volunteered for years as a writer and an editor — it’s printed in English, French and Armenian — and his son wanted to continue the family’s contribution).

Between those dawns and dusks, Ghazarian — photographer-in-residence for Rouge National Urban Park for 2018 — lifts his camera to his eyes to capture the natural beauty carved between Toronto and Pickering and stretching from Lake Ontario to the Oak Ridges Moraine.

Some days, the 23-year-old will hike up to 10 kilometres along the many distinct trails in “the Rouge,” Canada’s first national park in an urban setting, to get that perfect shot.

“It’s a joy to be out there,” says Ghazarian, who graduated from OCAD University in April with a bachelor of fine arts in photography.

“When you trade in your office for a forest, you can’t go wrong.”

Sharing his art with the public is another bonus.

Ghazarian was the park’s third photographer-in-residence, a paid position created from a partnership with Parks Canada and OCAD for a graduating photography student. Included in the job: A solo exhibition of landscapes.

Ghazarian’s show Memories of the Rouge ran Dec. 10 to 22 at OCAD U’s Ada Slaight Gallery. He selected nine different landscapes that encompassed three main Rouge themes: nature, culture and agriculture. He printed the photographs himself and blew them up — about half a metre by one metre.

“It’s a big thing for an artist to have the opportunity to show people their work, especially in print,” says Ghazarian, who used his Nikon D850 in the Rouge.

“I find having your photographs (displayed) online is great but when you print it into a physical form and put it on the wall and you can just stare at it in this large scale, there’s so much more emotion in that photograph that you can get than just looking at it online.”

Jeffrey Sinibaldi, acting external relations manager at Rouge National Urban Park, was part of the selection team that chose Ghazarian for the in-residence role. Sinibaldi says Ghazarian’s enthusiasm and the quality of his portfolio set him apart from other candidates.

“He’s done a lot of journalism and documentary work and was looking for an opportunity to do landscape photography; that was an area of his portfolio that he was lacking but something he was very interested in,” he says.

“How did he put it in the interview? ‘My goal is to get in National Geographic one day,’” Sinibaldi continued.

Ghazarian has already made strides in that direction. His photo of a baby Blanding’s turtle was published in the recent edition of Canadian Geographic. 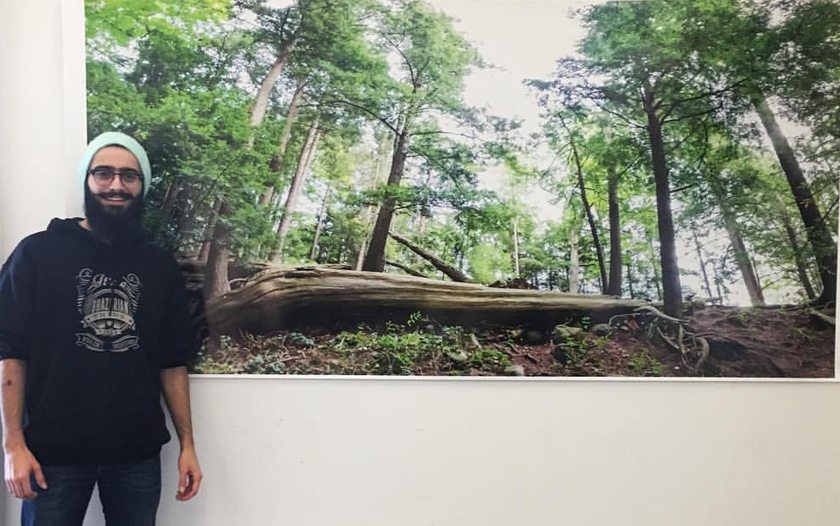 Ghazarian’s passion for photography is rooted in his childhood.

Movses Basmajian, Ghazarian’s late maternal grandfather, was an avid picture taker who filled photo albums with snapshots taken during family visits to his Detroit home. He sparked his grandson’s interest; Ghazarian began experimenting with disposable cameras that came as gifts from his parents.

“It was like the one form of expression that I could use to express myself,” Ghazarian says.

“Photography was a great medium for that (and) it kind of stuck with me throughout my childhood.”

His grandfather was also a Boy Scouts leader. That, too, inspired Ghazarian, who grew up in Scarborough and spent 12 years in Scouts Canada. He modestly conceded he earned enough badges for “two sides of a sash” and recalls using waterproof disposables at scouting events and camping trips.

Ghazarian graduated from disposables to using his dad’s old Canon, first as a hobby then to volunteer for a Montreal-based Armenian newspaper called Horizon Weekly. (His father, Sako Ghazarian, had volunteered for years as a writer and an editor — it’s printed in English, French and Armenian — and his son wanted to continue the family’s contribution). 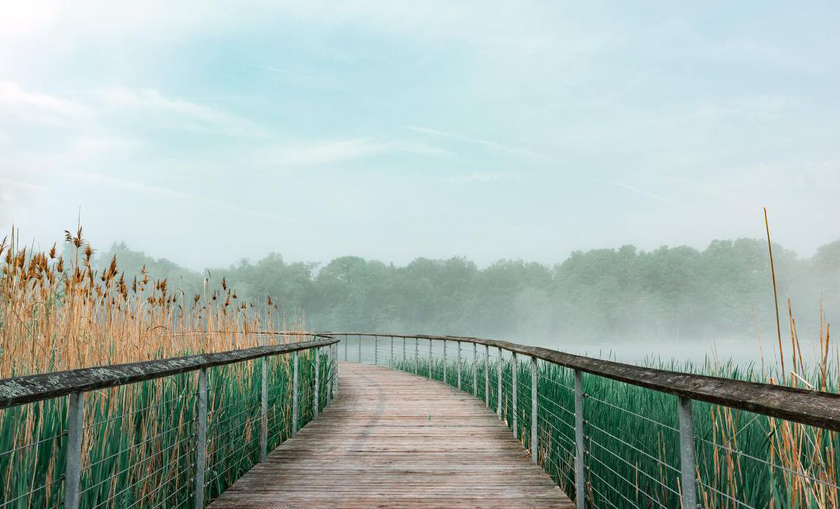 In late 2009, tragedy struck. Sako died from heart-related issues. As a young teen mourning his father’s death, Ghazarian says working with his camera provided a distraction during that difficult time.

“It was a way to keep busy and a way to get lost within the art and escape reality,” he says.

“The following year I had started to find myself dedicating more and more time to it.”

Ghazarian saved up to buy his first “real camera” in 2010 — a high-end Canon point and shoot with manual controls. Ghazarian, who attended an Armenian private school, experienced a creative turning point during a two-week class excursion to Armenia in 2011.

He purchased his first professional quality camera, a Nikon D7000, lenses and a flash for about $4,000 in 2012 — “It was an investment I would not regret,” Ghazarian says — and started his own business, ishkhanghazarian.com. Last year, he upgraded his gear to the Nikon D850, which cost about $5,000, as his “everyday tool for the job now.”

Though he grew up in Scarborough and lived relatively close to the Rouge, he doesn’t recall spending time in the park before being hired as photographer in residence. Then, he made the most of it — from solitary shoots to the “teamwork” with National Parks staffers and volunteers.

“When we’re hiking, you meet so many great people along the trails,” he says.

“We have wonderful volunteers that (lead) hikes every Wednesday … a lot of them have been coming before the park was established (as a national park) so it’s great to see their devotion to it.”

Ghazarian says his time as photographer-in-residence has helped him improve as an artist. The value of patience — like watching a setting sun until it bursts into full glory, a moment that might last only a split-second — was just one of his take-aways.

“It’s a lot of waiting but if you’re patient, you can get this moment of awe and sometimes you forget to take the picture because you’re struck by this beautiful landscape in front of you; there are all these emotions and everything’s just perfectly painted in front of you — then it’s ‘Oh, right, gotta take the picture,’” he says.

After a day of shooting, it’s back to the brick-and-mortar Parks Canada office, near Markham Rd. and Eglinton Ave. Working with Parks Canada colleagues, Ghazarian edits and archives the digital images for future use. He says the thrill of seeing a perfect shot during editing never wanes.

Ghazarian’s residence ended Dec. 31, but he will continue to work on contract with Parks Canada at Rouge National Urban Park this year.

Ghazarian says he was given a tremendous opportunity to “show the Rouge in my own eyes” and hopes more up-and-coming grads will apply for the position.

“If you love nature and you can make that into a job, isn’t that the dream?” he says.

“Everyone has their own Rouge, whether it’s the actual Rouge or some other thing that they love.”