Cambridge Armenian community thanks retiring pastor for decades of ministry 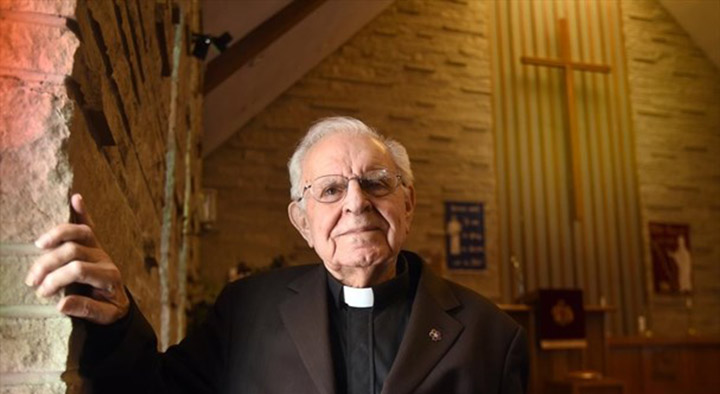 Pastor Hovhannes Sarmazian is retiring after 50 years of service, including 28 at the Armenian Evangelical Church of Cambridge. – David Bebee , Waterloo Region Record

CAMBRIDGE, CANADA — A tiny congregation of Armenian Evangelicals in Cambridge are celebrating the retirement of its 83-year-old church leader, who has guided the community spiritually for decades but also worked to preserve Armenian culture and heritage.

For 28 years, Rev. Hovhannes — John — Sarmazian has served the small congregation of Armenian Evangelicals. He was first called to work for the Cambridge church in 1990 when he was living with his wife and their three teenage children in Lebanon. There, he had spent 22 years as a pastor and vice principal at an Armenian school — 15 of those years were during a civil war in Lebanon.

It was hard to leave Lebanon. He said many people in the congregation cried and asked him and his family to stay, but civil unrest in the country had become “tiresome” and he was looking forward to reconnecting with family who had already settled in Cambridge and Toronto.

At first, “it was very hard to get used to all of this because this is very different from Lebanon,” he said of Cambridge. But now, he couldn’t imagine a different life.

“My children say, ‘Father, you have brought us to the best country in the world,'” he said, smiling.

But it’s his congregation in Cambridge that couldn’t imagine the last three decades without him. He has married countless couples, christened many babies, counselled the troubled, provided support for the sick and performed numerous funeral services.

“Sometimes, the hard thing is when the funeral happens,” he said of his job. “It is difficult to say words (of) condolence.”

But his dedication to teaching and caring for the small congregation of about 30 families — give or take a few over the years — has been steadfast.

“He has changed our lives,” said 53-year-old Samson Kahkedjian, a member of the church who was married by Sarmazian.

“He has kept and saved the Armenian culture in us by keeping the language and history (alive).”

A dedicated teacher and pastor, Sarmazian would always write out his Armenian sermons in English and hand out copies to the youth in the congregation who were unable to understand the language.

He has also hosted lectures on Armenian culture at the local Armenian community centre and wrote books that are both religious and biographical. Although he has officially retired — something he doesn’t like to admit — he still fills in when pastors for the Cambridge and Toronto churches are not available.

“He will never retire,” Leony Sarmazian, chair of the ladies auxiliary at the church, said. “He always has a pen in his hand.”

On March 10, the congregation is hosting a party to celebrate the “wise, gentle and kind” pastor and his lifelong commitment to the congregation and Armenian culture. The banquet will be hosted at 4 p.m. at the Cambridge Armenian Community Centre.