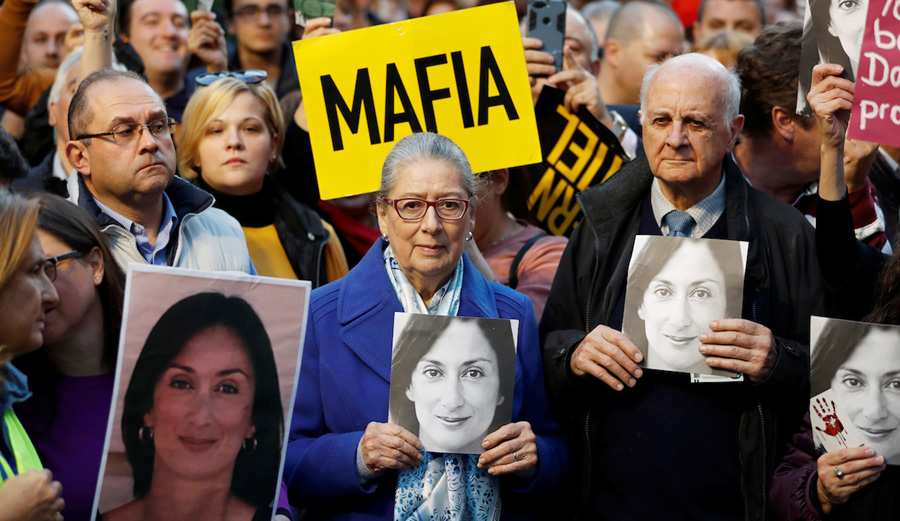 The investigation into the 2017 murder of Daphne Galizia has picked up, and the family is demanding Europol dig further into relations between Malta, Azerbaijan and the UAE to find out more – all the details below

In Malta, the investigation into the murder case of journalist Daphne Galicia, who was killed two years ago on September 16, 2017 by a car bomb, has picked up speed, Jam-News reports.

At the center of this process is a billion-dollar deal between the Government of Malta and the State Oil Company of the Azerbaijan Republic (SOCAR), which investigative journalists say contains traces of corruption.

The family of the murdered journalist – parents, husband, three sons and sisters – demands that Europol join in the investigation of contracts between Malta, Azerbaijan and the United Arab Emirates.

Daphne Caruana Galizia was looking into the laundering of large sums through various banks and financial institutions in several countries.

Among the originating countries of “dirty money” from the very beginning were Azerbaijan, Moldova and Russia.

The investigation into the murder of Daphne Galizia was in some stagnation for two years, which caused constant attacks by the international media not only on the Government of Malta, but also on the leadership of the European Union.

And in November 2019, detentions and arrests began in Malta in the case of Galizia – journalists accuse the authorities and a local tycoon of involvement in her murder.

On November 30, 38-year-old gambling tycoon Yorgen Fenech was detained and charged with complicity in the murder; he was arrested while trying to escape from the island nation.

During an interrogation, he denied his involvement, but said that the closest political ally of the Prime Minister of Malta Muscat, Keith Schembri, was involved in the murder.

Immediately after that, Schembri resigned from his post as head of the Prime Minister’s administration, but he denied all charges against him.

Prime Minister Joseph Muscat himself announced that he will resign after the murder investigation is completed.

Malta’s Prime Minister Joseph Muscat at a press conference on November 29, 2019, where he said he would resign when the investigation into the murder of Daphne Galicia was completed.  REUTERS / Yara Nardi

Meanwhile, on November 26, the family of Daphne Galizia appealed to Europol with a request to provide necessary support to the investigation, which is trying to trace the money path between Malta, Azerbaijan and the United Arab Emirates.

What is the essence of this deal, the investigation of which cost Galizia her life and which, most likely, will be the subject of a new trial? After the death of Daphne Galizia, the investigation was continued by her colleagues: 18 international publications joined forces in the “Daphne Project”.

Here’s what the British newspaper the Guardian, a Daphne Project participant, found out.

Why is the price twice as high? The essence of the deal between Azerbaijan and Malta

In 2013, the Government of Malta announced a tender for the construction of a power station on the island and its further provision with liquefied gas.

The tender was won by Electrogas, of which a third is owned by the Azerbaijani state-owned Socar.

Then, in 2015, Electrogas signed with the same SOCAR a contract worth more than a billion euros for the supply of liquefied natural gas.

In 2017, deliveries begin: and Malta is buying gas at much higher than the market prices.

2. SOCAR sold all this gas to Electrogas Malta, but at a price of about $153 million.  And made a profit of $40 million.

3 Electrogas Malta sells the same gas to the Malta company Enemalta for the same price.  Then Enemalta – with Electrogas – converts the gas into electricity.

Malta paid a much higher price for its gas than, for example, Greece, Italy and Turkey, which signed their deals at about the same time.

One of the questions is obvious: why did Malta sign a contract for a significantly overpriced amount?

Representatives of the Government of Malta in response to this question from journalists said that the gas price was higher at the time of the transaction in 2015, and then fell sharply.  At the same time, a fixed price is indicated in the agreement with SOCAR.

However, Greece and Italy, which have entered into similar gas agreements with other suppliers, have already achieved a revision of the terms.  But Malta did not even raise this issue.

In addition, this government response does not explain why gas was not purchased directly from Shell, without SOCAR.

There is another question:

Gas is transported in a liquefied form.  But although Azerbaijan has huge reserves of oil and gas, it does not produce liquefied gas. SOCAR has no experience in manufacturing or trading in liquefied gas.  Why then did the Government of Malta choose Socar as its partner?

And the third question: