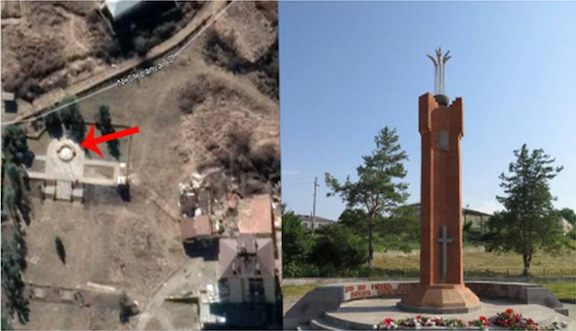 The image on the left is an aerial shot of where the Armenian Genocide memorial in Shushi used to stand, according to Mediaport

Images have surfaced on social media showing that a memorial dedicated to the victims of the Armenian Genocide, the Patriotic War and the first Karabakh war in Shushi has been leveled to the ground by Azerbaijani forces currently occupying the city.

The Russian news portal, Mediaport, posted aerial images on Telegram social media network showing an empty spot where the monument used to be.

This is the fourth incident of Azerbaijanis destroying Armenian religious or cultural heritage sites after the territories were surrendered to Azerbaijan. Thus far the destruction by Azerbaijan of Shushi’s Kanach Zham Church, the Zoravor Surp Astvatsatsin Church in Mekhavan (Jebrail) and the St. Yeghishe Church in Mataghis have been reported.

Earlier this month Azerbaijani President Ilham Aliyev, while visiting a church in occupied Hadrut ordered the removal of all Armenian medieval inscriptions from all churches, calling them fake.

“The world must stop this cultural vandalism being carried out by Azerbaijan,” the mayor of Shushi, Artsvik Sargsyan told Sputnik Armenia, referencing the Telegram post about the destruction of the Armenian Genocide memorial.

“The fact of the matter is that they do not understand the value of culture, because they don’t have [a culture of] their own,” Sargsyan told Sputnik Armenia.

The Armenian Genocide memorial was constructed 12 years ago within the Ghazanchetsots Cathedral complex in Shushi, which was attacked and bombed by Azerbaijani forces during the Artsakh War last fall. A park surrounding the monument is dedicated to the victims of the 1988 earthquake.