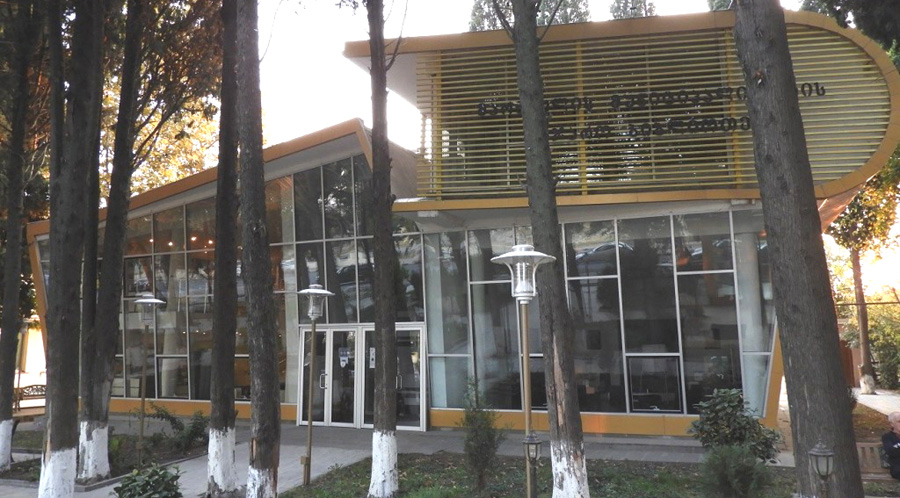 Azerbaijan has been supplying Georgian libraries with books containing hate speech against Armenians. While the libraries don’t see them as a problem, some Azerbaijani Georgians fear they might help plant the seeds of ethnic tension.

When Imran Gafarov, an Azerbaijani Georgian, came across a book full of territorial claims and hate speech against Armenians at the public library in Marneuli, an Azerbaijani-majority city in southern Georgia’s Kvemo Kartli region, he was in a state of disbelief.

‘When I visited the Marneuli library, I saw a book called Western Azerbaijan’s Monuments, written by Aziz Alakbarli. I thought the book would be about the historical monuments located in the west of Azerbaijan. However, as I read the book, it became clear that the book was about monuments situated in the territory of Armenia. The book contained an element of hostility towards Armenians’, Gafarov told OC Media.

There are two copies of the book in the library. On the 13th page of the 2006 edition, there are territorial claims made against Armenia. On the 21st page, the writer claims that Armenians committed genocide against Azerbaijanis on four occasions. The 2007 edition contains a map of ‘Western Azerbaijan’ in which locations situated in Armenia are written in their Azerbaijani variants.

The library contains other propagandistic material, which can be divided into three types: hate speech directed at Armenia and Armenians, support for separatist and territorial claims against Iran, and propaganda on behalf of the ruling Aliyev family.

In Georgian-Azerbaijani Lands, the author, Eldaniz Ibrahimov, does not clearly state his aim, but a subtle message pushing Georgian Azerbaijanis to independence is evident. Though the book is supposedly about Azerbaijan’s monuments, it starts with a 1918 speech made by then–Chairman of the Parliament of the Republic of Azerbaijan, Alimardan Topchubashov:

‘There is nothing as elastic and mutable as politics. Our hopes of living in a period of freedom and independence are being reified. We never lost our hope. We have always believed that our people can live freely and that we would do anything to gain independence. We have never given up on this worthy endeavour and we never will, as we recognise nothing that is greater than this fortune’.

On the ninth page of the book, the author states the following: ‘Some interesting pieces of research are being published on occasion about the Azerbaijanis of Georgia. Their lives, problems, and situation are pertinent topics for the Azerbaijani media. Mass media, including websites, dedicate a special place to the topic of Azerbaijanis living in Georgia. However, this does not suffice. Our fingers should consistently be placed on the pulse of Borchali [historic name for parts of Kvemo Kartli] as this region holds special importance for us’.

These sections of the book have not been included in the Russian and English translations.

In the same library, the fourth volume of Armenians and Facts contains extreme hate speech on more or less every page. On page 1,925, Armenians are described as ‘gypsies’ and ‘slaves’:

‘Armenians are newcomers to Turkey and the Caucasus and have found perfectly habitable lands. They have taken advantage of the hospitality of Turkic peoples and have decided to settle here for good. Nevertheless, they have not been able to rid themselves of their gypsy ways and have become the political puppets of powerful states. They have become the eternal enemies of the overlords whose subjects they used to be’.

‘The time will come when Armenians will be cursed by humankind and remembered by scholars, travellers, and historical figures as a two-faced, mischievous, immoral, villainous tribe that distorts history, changing the names of monuments, historical sites and places belonging to Turks, making them Armenian’.

There are also a substantial number of books with content supporting separatist claims against Iran, such as works by poet Khalil Rza Uluturk. Most of these propagandistic books were published on the order of Azerbaijan’s Ministry of Culture and Tourism.

Lana Khashalashvili, the director of the library, told OC Media that she was unaware of the presence of hate speech in the books.

‘When the library just opened, the Embassy of Azerbaijan gifted it 800 books in the Azerbaijani language. We don’t have the authority to check these books as we view the library as an archive. We do not have the power to take out any books from the list’.