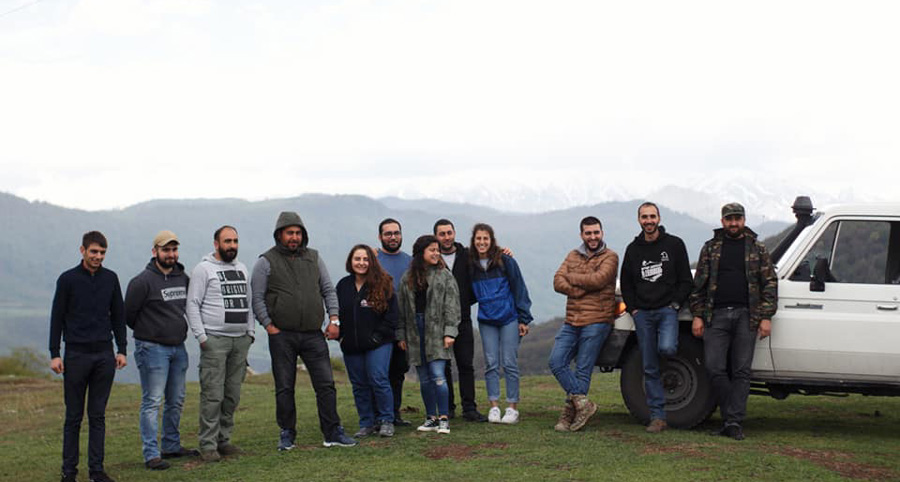 YEREVAN—Due to the spread of COVID-19, a state of emergency has been in effect in Armenia since March 16. Public transportation is not available. Varying degrees of economic activity in the country are very limited. As a result, already high unemployment rates have been compounded by forced layoffs and insolvent or irresponsible employers.

The government has adopted 14 anti-crisis measures, but the most socially vulnerable group has been left out of those programs, people who either did not work before the crisis, were unregistered workers or worked for a daily wage.

Realizing the seriousness of the situation and the imperative to help the most vulnerable compatriots, the Armenian Youth Federation (AYF) Armenia and Nikol Aghbalian Student Association launched the “Help Your Compatriot – #TogetherWeWillWin” initiative.

With the help of donations from several organizations, packages were prepared which AYF members delivered to compatriots living in the border regions, who have suffered the most from the crisis.

Packages contain essential foods which will be enough to feed a family of four to six people for about 20 days.

Thanks to this program, 200 families have been provided sustenance in the border settlements and marzes of Tavoush and Vayots Dzor.

During this time, it became clear that the number of citizens in need of assistance is indeed much higher. It is evident that these days hundreds of Armenian families are unable to provide their children with daily bread. And those families have been left alone and desperate during this uncertain period. During their visits to Vayots Dzor and Tavoush regions, AYF members became convinced that with their visits and the manifestation of human care, they could change the uncertain picture of the future one family at a time. Our people have endured and overcome much more difficult trials. We must come out of this ordeal victorious and united. Keeping the hearth of every Armenian family alive is a sacred task that we have pledged to preserve. AYF members have received positive feedback about their initiative, and many people have expressed their willingness to support the program.

That’s what motivated the creation of a fundraiser, the proceeds of which will support more families. The fundraiser will continue as long as needed during the crisis. As funds are generated, members prepare new care packages to deliver to a new region.

So far, with the help of the ARF Supreme Council of Armenia’s Repatriates’ Assistance Office, 600 families have been provided with assistance. The program has now been expanded and is being implemented jointly with the Armenian Relief Society (ARS) and Homenetmen HASK, and as a result we will have the opportunity to deliver more packages of hope to families.

Everyone can take part in the program and help support at least one family facing this crisis in the homeland.

To participate, donors can transfer any amount of money to one of the following accounts (depending on the currency). Meghri Dervartanian is a member of the AYF-YOARF Greater Boston “Nejdeh” Chapter and currently serves on the 2019 Central Executive. She is also a Homenetmen scout and athlete. She graduated from University of Massachusetts Boston in May 2019 with a degree in Business Management and a concentration in Marketing.