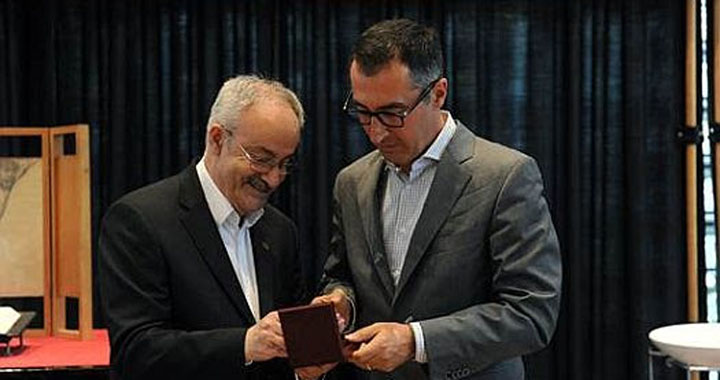 In a moving ceremony that took place at the Chapel of the Kaiser-Wilhelm-Gedachtniskirche, Bundestag Member, Cem Ozdemir was awarded the Raoul Wallenberg Medal in recognition of his role in building bridges between Armenians and Turks and his pivotal contribution as a driving force behind the Bill passed by the Bundestag in June 2, 2016, which recognized the massive killings of Armenians from 1915, as a Genocide.

In 2016 Ozdemir initiated a resolution in the Bundestag that would formally classify the 1915 massacres as genocide. The resolution passed on 2 June 2016 with what Speaker Norbert Lammert called a “remarkable majority.” At the time, Ozdemir emphasized that the resolution was not designed to point fingers at others but rather to acknowledge Germany’s partial responsibility for the genocide. In 1915, the German Empire was a close ally of the Ottoman Empire but decided not to condemn the violence nor to intervene in any other way.

Thus, the Board of the Raoul Wallenberg Foundation unanimously resolved to grant the award to the politician of Turkish extraction for the pivotal role he has played in the presentation of the Bundestag Genocide Bill.

Prior to the voting in the Bundestag Ozdemir stated: “There is never a good time to speak of something so inconceivably barbaric as genocide. After lengthy and laborious deliberations, we are voting today on a motion that speaks of genocide, clearly refers to German complicity and establishes that this complicity virtually binds Germany to work for the normalization of relations between Turkey and Armenia and for rapprochement between the two countries.”

“Ladies and gentlemen, the fact that we were accessories in the past to this dreadful crime must not mean that we aid and abet those who deny it today. Coming to terms with the Shoah has been the foundation of our democratic Germany. It is therefore time for us to come to terms now with other crimes committed by predecessor states of the Federal Republic of Germany.”

The Raoul Wallenberg Foundation construes his words as a gesture of reconciliation which will build bridges between Turks and Armenians and will preserve the blessed memory of the victims and the courageous rescuers who reached-out to the persecuted ones.

The IRWF is fully devoted to preserving and spreading around the legacy of Raoul Wallenberg and his likes, namely, women and men who reached-out to the victims of the Holocaust, as well as other tragic chapters of human history, regardless of the religion, race and nationality of rescuers and survivors alike.

More than 300 heads of state and government (former and incumbent), Nobel Prize laureates and distinguished personalities from all walks of life, religions and ethnicities, including Pope Francis, have joined the ranks of the Raoul Wallenberg Foundation, an educational NGO chaired by Eduardo Eurnekian and created by Baruch Tenembaum.

One of the flagship programs of the IRWF is an ” in-depth research of the Muslim Turks and Kurds who reached-out to the Armenians from 1915 onwards.  The same was carried-out in the field, under the strict academic supervision of Professor Taner Akcam, of Clarks University. The preliminary findings, which include the stories of over 180 rescuers, were published on the website as a free-download book, in Turkish, Armenian, English and Spanish.

The IRWF was represented by its local representative, Pastor Annemarie Werner, head of the Vaterunser Church in Berlin, who welcomed the audience. Then Martin Germer, Pastor of the hosting chapel, greeted the attendants and spoke about the symbolism of the venue. The renowned composer, Marc Sinan, whose roots are Turkish and Armenian, told the moving story of his family (his grandmother survived the Genocide) and how he found in Özdemir a source of inspiration. Following his speech he presented a song.

Dr. Amill Gorgis’ made a moving speech and presented the Raoul Wallenberg Medal to the laureate.

Mr. Ozdemir, accepted the award and thanked the IRWF, stating that he knew very well the awe-inspiring story of Raoul Wallenberg and therefore how moved he was by accepting a medal bearing the name of the Swedish diplomat.

The event was closed with a short introduction and song by Dhiraj Roy.