Artsakh ARF Kicks Off Election Campaign at the Border

The Armenian Revolutionary Federation of Artsakh kicked off its election campaign for president and parliament on Wednesday near the border village of Marzili in the Hadrut Province with candidates, headed by the party’s presidential hopeful, paying respects to memory of Artsakh freedom fighters.

Marzili is the site where Artsakh freedom fighter Monte Melkoian (Avo) was killed by Azerbaijani troops. At memorial in his memory, the ARF candidates pledged their allegiance to all those who gave their lives in the name of Artsakh’s Liberation Movement.

Artsakh’s presidential and legislative elections will take place on March 31.

The ARF’s slogan for the Artsakh elections is “We have won, will not concede and will advance TOGETHER,”

Under the slogan of “We have won, will not concede and will advance TOGETHER,” the Artsakh ARF kicked of the election campaign with a platform that pledges to advance socio-economic justice for the people of Artsakh as well as fight to preserve Artsakh’s territorial integrity during the Karabakh conflict resolution process. Below are the points on which the ARF candidates are campaigning.

The ARF of Artsakh made the decision to participate in the elections was made during a special convention held at the end of January. 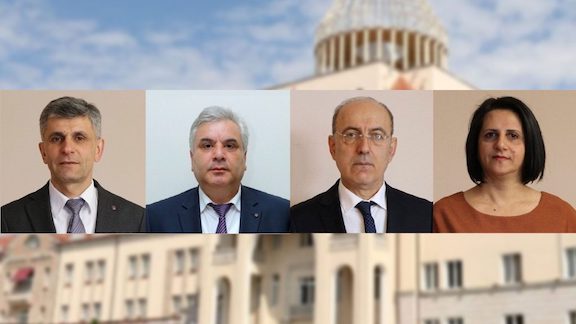 Ishkhanyan, who is the current chairman of the Artsakh ARF Central Committee, was chosen as the party’s presidential candidate. In an interview with Yerkir.am, Ishkhanyan outlined some of his and the ARF’s priorities, including instituting reforms to the Artsakh constitution, adopted in 2017, that concentrates power with the office of the president. Ishkhanyan advocated for a distinct separation of power after explaining the party’s belief that the current concentration of power is not a practical system of government. The separation of powers would allow the legislature and local government structures to operate as independent elected entities.

Ishkhanyan further prioritized the strengthening of the Armenia-Artsakh Strategic Cooperation agreement while also promoting the notion of the “Nation-Army” concept which he says has been discussed by the party since the 1990s, although concrete steps to strengthen that dynamic have not been initiated.

In addition to chairing the Artsakh Central Committee (CC), Ishkhanyan is also a member of parliament where he has headed the ARF legislative bloc from 2015 to 2017 and serves as a member of the permanent commission on finance, budget and economy.

Ishkhanyan was born on December 27, 1968 in the Ashan village of Artsakh’s Martuni province. After receiving his primary and secondary education in Ashan, Ishkhanyan attended the Stepanakert Pedagogy Institute’s history and social studies department, served as principal of the Ashan Secondary School and was head of the Ashan community.

Ishkhanyan has had a storied role in the Artsakh Liberation Movement beginning with the volunteer movement and as an active member of the student detachment. He was commander of the 28th battalion of the Nargorno-Karabakh (NKR) Defense Army, earned the Martakan Khach (Military Cross) first degree medal and was awarded the coveted Mkhitar Gosh medal by the president of Artsakh in 2018.

A member of the ARF since 1989, Ishkhanyan’s political career began in 1991 when he was elected to the first and later the sixth convocation of the National Assembly of the Republic of Artsakh. He is married with three children.

In addition to Ishkhanyan’s candidacy for president, Artsakh ARF’s top candidates for parliament include Arthur Mosyan, Vahram Balayan and Armine Harutyunyan.
Like Ishkhanyan, Mosyan has distinguished himself in the Artsakh Defense Army from soldier to deputy district commander and has been awarded the Martakan Khach first degree and Mkhitar Gosh medals. Mosyan was born on January 15, 1975 in Martuni and has been a member of the ARF since 1990. He was the deputy head of Martuni district administration, Minister of Justice, chairman of the Control Chamber of Artsakh and prosecutor general of Artsakh. Mosyan was also elected a deputy of the third convocation of the Artsakh National Assembly.

Candidate Balayan was born on August 22, 1962 in the village of Gishi in the Martuni region. A member of the ARF since 1991, Balayan is a professor and doctor of historical sciences and author of 124 scientific works. For many years he was head of the history department at Artsakh State University, as well as serving as vice-rector. Balayan was a member of the third, fifth and sixth convocations of the National Assembly and has served as vice president since 2015. In recognition of his contributions, he was awarded the Mesrop Mashtots and Yerakhtakitutyun (Gratitude) medal.

Rounding out the candidates is Harutyunyan who was born on September 4, 1972 in Gyargaryar village in the Stepanavan region. Since 2011 she has been a member of the Armenian Relief Society and currently serves as chair of the Artsakh region. Harutyunyan was a teacher and organizer at Shushi Secondary School, a chemistry lecturer at the Agricultural College and held responsible positions in various departments of the NKR executive. She is currently the head of the letters division at the government affairs secretariat of the presidential administration.