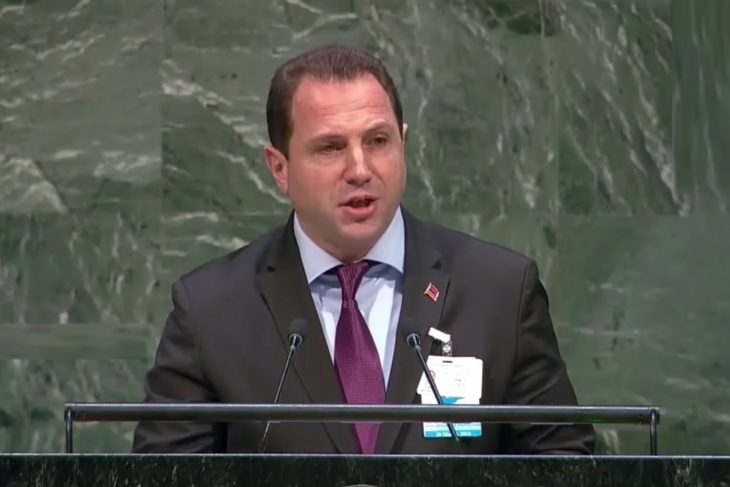 The most noteworthy Armenian foreign policy development of the week was supposed to be the first negotiating session between Armenia’s Prime Minister Nikol Pashinian and Azerbaijan’s President Ilham Aliyev over the Artsakh conflict. But since there was no breakthrough in these negotiations, we shall focus our attention on important related issues.

On March 28, 2019, while addressing the Armenian Parliament, Prime Minister Pashinian criticized the United States government’s lack of reaction to last year’s democratic changes in Armenia, dubbed as the “Velvet Revolution.”

This is the first time in a year that Pashinian has used such strong language in referring to the United States. “The U.S. has long been acting as the most ardent defender of democracy in the entire world,” Pashinian stated. “I want to ask all of us a question: how did the U.S. react to the unprecedented democratic change in Armenia? It was a profoundly and quintessentially democratic change and nobody can doubt this. I, for example, have told America’s representatives that I believe that they basically came up with zero reaction. Why?”

Pashinian then went on to defend Armenia’s independent political line regardless of the pressures exerted on Yerevan by major powers. “When we say that our country’s sovereignty is of paramount importance to us we don’t mean that we need to replace dependence on point A [Russia] by dependence on point B [the United States]. We take our sovereignty very seriously and I want to assure you … that our government is strongly committed to protecting our country’s and people’s sovereignty in all directions.”

Pres. Trump’s administration has so far paid only lip service to the dramatic and peaceful changes in Armenia. Pres. Trump sent a congratulatory message to Pashinian last September praising the “Velvet Revolution” and expressing readiness to help the new government implement sweeping reforms. Likewise, Secretary of State Mike Pompeo saluted the “remarkable changes” in Armenia. However, these beautiful words have remained on paper. No concrete steps were taken to assist Armenia. That is partly due to the fact that the Trump administration can care less about democratic developments in foreign countries and also due to Pres. Trump being self-absorbed with his own ego and personal interests!

Prime Minister Pashinian’s declaration is a very positive development for Armenia’s foreign policy and a sharp departure from the previous Armenian leaders’ position. So far, most of the pressure on Armenia has come from Russia. This is an inevitable fact given Armenia’s economic, political and military reliance on Russia. The new development is that Armenia’s leaders are no longer willing to blindly succumb to Russia’s desires and orders trampling upon their country’s sovereignty. When Armenia’s interests are in question, Pashinian has neither shied away from criticizing the European Union nor reasserting Armenia’s sovereignty in his discussions with Russian President Vladimir Putin.

If the United States wants to win over Armenia, it has to offer a carrot rather than a stick. As the saying goes, you can catch more flies with honey than vinegar!

The second most astounding development last week was the declaration of Armenia’s Defense Minister Tavit Donoyan during his visit to the United States. “As the minister of defense, I state we have reformulated the ‘territories in exchange for peace’ approach to ‘new war in exchange for new territories’ approach,” Donoyan announced on March 29 in New York at a meeting with members of the Armenian community. “We will get rid of the trenches and persistent defensive stance. We will increase the number of military units capable of transferring military operations to the territory of the adversary,” Donoyan stated. “We will not give up anything.”

While some may interpret the Armenian Defense Minister’s words as war-mongering, in reality, Donoyan is responding in kind to the thousands of threats issued over the years by Pres. Aliyev to conquer Meghri and even Yerevan, Armenia’s capital. It is time that Armenia’s leaders speak from a position of strength, not weakness.

Clearly, Aliyev is not ready for war. Otherwise, he would have already attacked. His threats should not be taken seriously. It is proper to silence him through counter-threats, and if needs be, preemptive attacks!