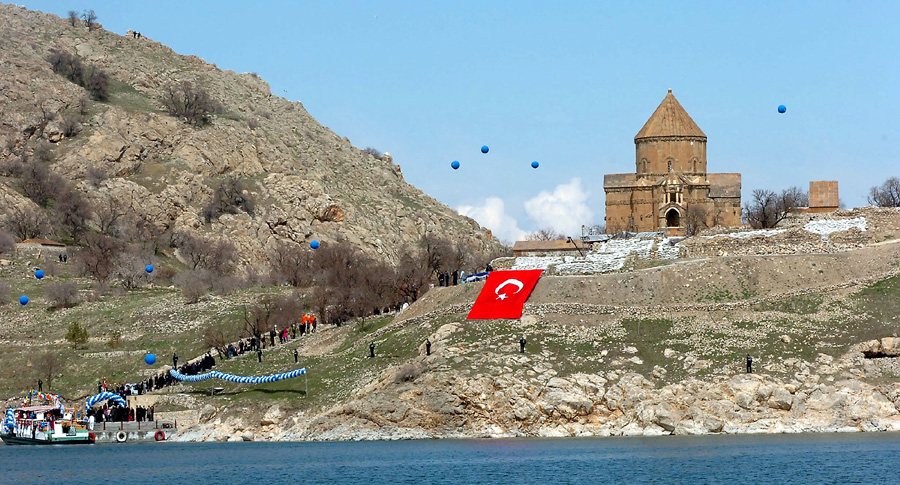 It is amazing the lengths to which the Turkish government went to include Istanbul Armenian clergy and laymen in its propaganda campaign.

The opening of the exhibit was not only attended by Alper Aktas, Turkey’s Consul General in New York, but surprisingly, by several Armenian leaders as well as other Christian clergymen from Istanbul. Among the attendees were Istanbul Armenian Patriarchate’s Locum Tenens Bishop Sahak Mashalian; Shirvan Murzoyan, an Armenian priest from Istanbul; Yessayi Demir, Chairman of St. Kevork Church in Samatia, Istanbul; Mesut Ozdemir, Chairman of Dsnount Sourp Asdvadsadsni Church; Yetvart Ayvazian, Chairman of Sourp Krikor Lousavorich Church in Kouzgounjouk, Istanbul; Tamar Karasou, Director of the Turkish Branch of Sourp Krots Association; Aram Kouran from “Louys” biweekly; Chairman of the Board of Sourp Prgich Armenian Hospital in Istanbul, Bedros Shirinoglu and his wife; Turkish Minority Community Foundation Representative Moris Levi; Syriac Ancient Church Foundation President Sait Susin; American Greek Orthodox Church Archbishop Elpidophoros Lambriniadis; and members of the Turkish and Armenian communities. I am pleased that none of the clergy from the Armenian Church in the United States (Prelacy and Diocese) attended the opening of the exhibit in New York.

While it is understandable that given the tense relations between the United States and Turkey, the Turkish government would want to carry out a propaganda campaign in the US to improve its stained image, much less acceptable is the participation of the Armenian laymen and clergy as well as Syriac and Greek leaders. One can excuse the attendance of the Istanbul leaders given the fact that they are hostages in the hands of the oppressive Turkish regime. In the case of Bishop Mashalian, however, he may have come willingly, as he is one of the two candidates for the December election for the position of the Armenian Patriarch of Turkey. The Bishop knows well that any disobedience to the wishes of the Turkish government will cost him the seat of the Patriarchate.

Despite the strong desire of Erdogan’s government to carry out propaganda in the US, it failed to capitalize on this opportunity. Turkey spent a fortune to fly the 88 photographs of the Holy Cross Church to New York, pay for the rental of an exhibit hall in Manhattan, fly and accommodate over a dozen guests from Istanbul to New York City, and pay the expenses of making a film on the Holy Cross Cathedral, “The Hidden Monuments of Anatolia Coming to Light: Akdamar,” shown at the exhibit. Yet, the highly-paid US lobbying firms hired by Turkey either were not asked or failed to disseminate the exhibit propaganda to the American media. Secondly, the Turkish government did not think of delaying the opening of the exhibit by one week so Pres. Erdogan, who will be in the US this week, could attend the official ribbon cutting ceremony. In September, Pres. Erdogan was present in New York at a similar opening of the exhibit of the photos of Ara Guler, a Turkish Armenian, which was also sponsored by the Turkish President’s Office.

Here are the reasons why I consider the Holy Cross Church photo exhibit a manifestation of Turkish propaganda:

1) The Turkish government has designated Holy Cross as a museum, not a church, allowing Armenian liturgy to be performed only once a year by special permission. Much more important than organizing an exhibition in New York would have been the designation of the Holy Cross edifice as a church, not a museum. What are the Armenian and other clergymen doing celebrating the exhibit of a museum? If they had any guts, they would have refused to attend the exhibit until the museum is designated as a church which was completed in 921 AD, under the sponsorship of Armenian King Gagik Ardsruni. Visitors have even to pay a fee to enter “the museum.”

3) The Turkish government turkified the name of the island by changing it from Aghtamar to Akdamar (which means “White vein” in Turkish).

4) In his remarks, Bishop Mashalian praised Pres. Erdogan for organizing the exhibit in New York: “Under the leadership of the president’s vision, special attention and interest was shown in the Akdamar Church…. This is a cultural initiative to overcome the difficulties of communication between the Turkish and Armenian peoples, as well as a bridge to a better future and understanding based on goodwill.”

5) Chairman of the Board of Sourp Prgich Armenian Hospital in Istanbul Bedros Shirinoglu stated that “President Recep Tayyip Erdoğan has made great efforts for minority communities…. We would like to express our gratitude to him for all his help and to the {President’s] Communications Office for this exhibition.

6) American Greek Orthodox Church Archbishop Elpidophoros Lambriniadis reinforced the Turkish propaganda by underlining the significance of the photos at the exhibition in terms of showing the importance attached to the Christian minority in Turkey, saying: “Turkey is going in the right direction and it is good to tell the whole world about this.”

7) Pres. Erdogan proudly told the Turkish media last week that 17 representatives of Turkish minority groups are in New York at this time for the photo exhibit of the “Akdamar Church.”

If the Turkish government was truly sincere in promoting the Armenian Church in Aghtamar, why did it allow a group of Azeris recently to visit the church and claim it to be a Caucasian Albanian Christian church? This is the usual lie that the Azeri government uses to describe all historic Armenian churches in Azerbaijan. The Azeri visitors displayed inside the Holy Cross Church the Azeri and Turkish flags with an “Azeri priest” claiming to say prayers. In a statement made outside the front door of the church, an Azeri representative accused Armenians of invading Azerbaijan and committing vandalism. The Turkish government should apologize to Armenians for allowing the perpetration of such a gross lie!