Armenian activist detained in Turkey for using the word ‘genocide’ 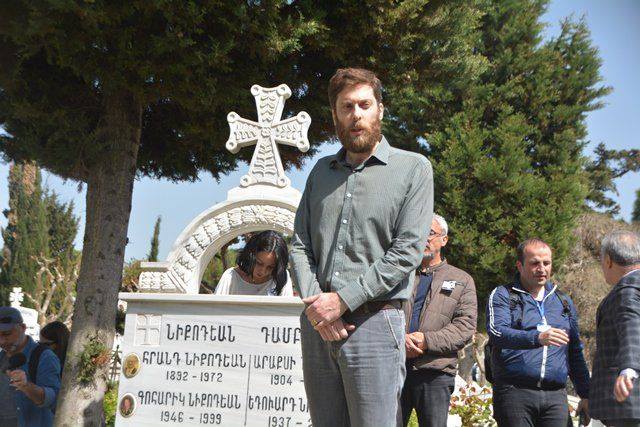 A prominent Turkish-Armenian activist was taken into custody last week for making controversial anti-Turkish narratives and using the term “genocide” during a requiem service on Armenian Genocide commemoration day, the Armenian Weekly reports.

Nor Zartonk activist Alexis Kalk was attending the annual memorial service of Sevag Balikci, a soldier who was murdered on April 24, 2011 while serving in Batman, Turkey. Members of the Armenian community including Peoples’ Democratic Party (HDP) MP, Garo Paylan, were at the Sisli graveside service.

At the cemetery, Kalk spoke briefly about Balıkci’s murder, calling it a hate crime—an allegation the Turkish courts have denied despite sufficient evidence and testimony. Kalk also emphasized the continued push for justice for those oppressed by Turkish violence and the victims of the Armenian Genocide. “We will continue the struggle for justice, equality and brotherhood for all those victims of murder, Sevag Şahin Balıkçı and those sacrificed during the Armenian Genocide,” said Kalk.

According to Nor Zartonk member Murad Mihci, Kalk was taken into custody after dinner with friends that same evening. He was approached by police on Halaskargazi Street, a main thoroughfare in Sisli; police asked Kalk if they could speak to him about his remarks earlier that day. They took him into custody, interrogated him and released him soon after taking his statement. According to two other sources, Paylan accompanied him to the police station.

Istanbul-based youth movement Nor Zartonk closely followed Balıkci’s murder case which took place in the military courts of Diyarbakir in order to ensure a fair trial. The case was instead marred by several testimonies of one murder witness, who was ultimately jailed for perjury, and the unsuccessful appeals by the victim’s family. The accused murderer Kivanc Agaoglu was sentenced to four years in prison, but due to ongoing appeals, he is still a free man. His case is now being tried in a higher court.

Nor Zartonk claims the police induced extra pressure on Kalk because his remarks were delivered right before the Armenian Genocide commemoration scheduled to take place later that evening in Sishane for the first time ever. Demonstrations previously held at Haydar Pasha station and Istiklal Boulevard were banned by the government this year.

Just four days prior in the Netherlands, Kalk had spoken at an event organized by Nor Zartonk and Doorbraakcalled “Is the Armenian Genocide history?” After learning about Kalk’s detention, Turkish-Armenian journalist Aris Nalci recalled talking to him about the Armenian Genocide and how it limits Turks’ freedom of speech.

Other Nor Zartonk members state that the use of the word ‘genocide’ has been increasingly suppressed by the ruling AKP government and their ultra-nationalist coalition partner MHP, as President Erdogan takes on a renewed push of denialism on the 104th anniversary of the Armenian Genocide.