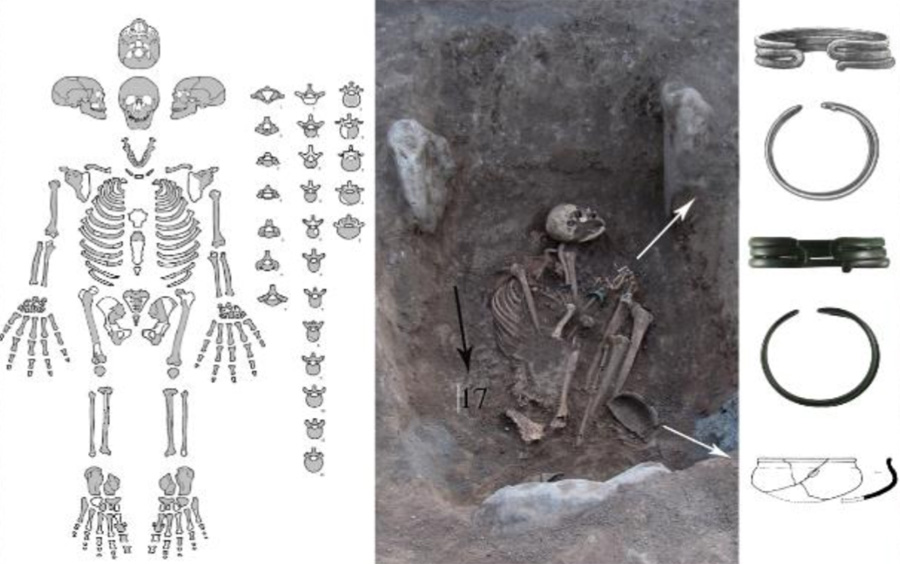 In the highlands of Armenia, archaeologists have discovered the grave of an injured woman who died during the Iron Age, Forbes reports. Based on the wounds to her skeleton, she may have been the kind of Amazon warrior the ancient Greeks wrote about.

From the 9th to the 6th centuries B.C., the Kingdom of Urartu flourished in Armenia. Well-connected with the major empires from the Mediterranean to India, Urartu had a distinct cultural environment focused on hunting, the military, and a trade economy. Intruders such as the Scythians, however, who sought to conquer the highlands, were often rebuffed by trained Urartian archers. New analysis of a skeleton from this region shows that these Urartian warriors were both men and women.

Writing in the International Journal of Osteoarchaeology, a group of Armenian researchers led by Anahit Khudaverdyan of the National Academy of Sciences of the Republic of Armenia detail their study of a skeleton from the Bover I necropolis in Lori Province. Discovered in 2017, the skeleton was buried in a flexed manner with ceramic vessels and jewelry, which date it to the Early Armenian period (8th-6th century B.C.). Based on the bones, the archaeologists concluded that the grave was for a woman in her 20s. Although the woman was initially assumed to have been high-status because of the jewelry, upon reexamination of her strong and injured bones, the researchers began to suspect that she was also a warrior.

The woman’s muscle attachments in her upper body were strong, “indicating considerable work activity,” the archaeologists write. Specifically, the woman’s pectoral and deltoid muscles “had been used in flexing and adducting the hand at the shoulder,” lending support for an interpretation that she was a trained archer used to drawing a bow across her chest. Her thigh bones were also well-developed with pronounced gluteal muscles, possibly “related to specific military activities, such as horse-riding,” the researchers suggest.

In addition to her muscular frame, an iron arrowhead was discovered embedded in the woman’s left knee, an injury that had healed long before her death. Khudaverdyan and colleagues think that the bow and arrow used to cause this injury were home-made weapons frequently used for war or hunting.

Three other injuries to her skeleton appear to have been caused around the time of her death, and likely contributed to it. Her left hip and right thigh bore chop marks, while her left lower leg had been stabbed. The sheer number of injuries “emphasizes the fact that for this Early Armenian female from Bover I, interpersonal violence was an ever-present aspect of life,” the archaeologists write. Additionally, the fact that she suffered at least two different kinds of cuts just before death – most likely from a hatchet and from a sword – suggests she was wounded by more than one person. “We suppose that she had died in battle,” they conclude.

Warrior graves elsewhere in the Armenian highlands present similar skeletal evidence; at the site of Qarashamb, the archaeologists point out, there are at least five male warrior burials. But this burial from Bover I is one of the few examples of a likely female warrior, in spite of the fact that women and men in this culture were known to have fought together.

Khudaverdyan and colleagues muse that this kind of female warrior may have been the basis for the ancient Greek tale of the Amazons, the fierce women reported to live in the eastern part of the territory of Asia Minor, close to modern-day Armenia. “It seems probable that there were indeed female warriors amongst the tribes of the Caucasus,” they suggest, concluding that their “ongoing discoveries do suggest the subsistence of real women warriors whose lives matched the descriptions of Amazons in Greek myths.”