ANCC Statement on the Centenary of the Treaty of Sèvres 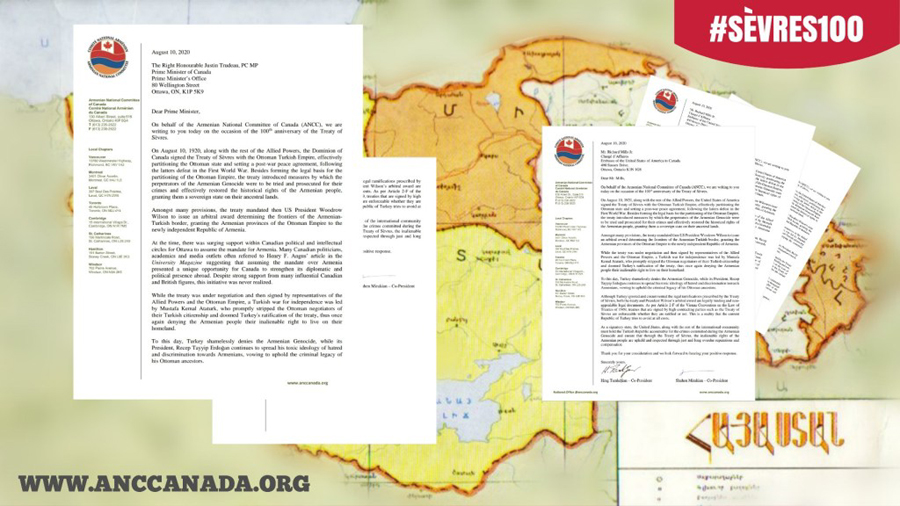 Today, the Armenian National Committee of Canada (ANCC) is marking the 100th anniversary of the Treaty of Sèvres.

After the end of the First World War, on August 10, 1920, the Allied Powers, including the Dominion of Canada, signed the Treaty of Sèvres with the Ottoman Turkish Empire, effectively liquidating the Ottoman state and setting a post-war peace agreement, following the latter’s defeat during the war.

Besides forming the legal basis for the partitioning of the Ottoman Empire, the treaty introduced measures by which the perpetrators of the Armenian Genocide were to be tried and prosecuted. Furthermore, the treaty mandated then US President Woodrow Wilson to determine the frontiers of the Armenian-Turkish border, restored the historical rights of the Armenian people and granted them a sovereign state on their ancestral lands.

On this important occasion, the ANCC sent letters to Canada’s Prime Minister, the Right Honourable Justin Trudeau and the diplomatic representatives of the rest of the signatory states, outlining the history and the legal relevance of the treaty, while urging them to hold Turkey accountable for the crimes committed during the Armenian Genocide.

“To this day, Turkey shamelessly denies the Armenian Genocide, while its President, Recep Tayyip Erdogan continues to spread his toxic ideology of hatred and discrimination towards Armenians, vowing to uphold the criminal legacy of his Ottoman ancestors.” read a part of the letter signed by ANCC Co-Presidents, Hrag Darakjian and Shahen Mirakian.

Although Turkey ignored and circumvented the legal ramifications prescribed by the Treaty of Sèvres, both the treaty and President Wilson’s arbitral award are legally binding and non-appealable legal documents. As per Article 2-F of the Vienna Convention on the Law of Treaties of 1969, treaties that are signed by high contracting parties such as the Treaty of Sèvres are enforceable whether they are ratified or not. This is a reality that the current Republic of Turkey tries to avoid at all costs.

“As a signatory state, Canada, along with the rest of the international community must hold the Turkish Republic accountable for the crimes committed during the Armenian Genocide and ensure that through the Treaty of Sèvres, the inalienable rights of the Armenian people are upheld and respected through just and long overdue reparations and compensation”, concluded the letter.