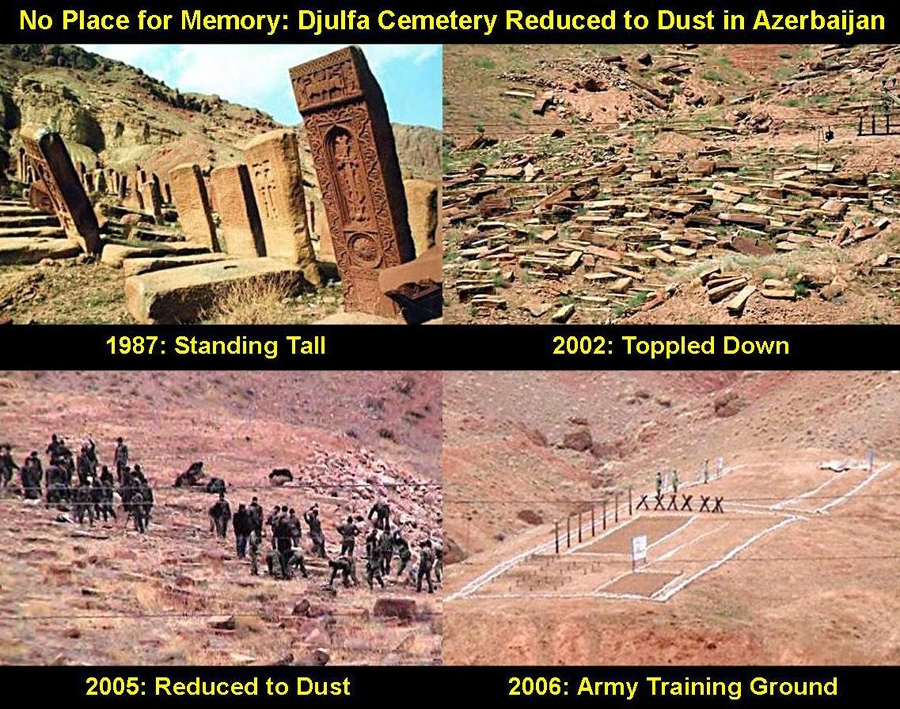 OTTAWA- December 8, 2019 marks the 14th anniversary of the systematic destruction of the historic Armenian cemetery of Djulfa by Azerbaijani troops as part of a deliberate campaign to erase Armenian monuments in territories currently occupied by Azerbaijan. By December 15, 2005, over 200 Azerbaijani soldiers had already destroyed 10,000 masterfully hand-carved Khachkars (stone crosses) some of which dated to the 6th century. Recognized by UNESCO as a significant expression of Armenian culture and history, Khachkars signified the resilience of the Armenian people and their deep connection with their Christian faith.

In recognition of this crime against humanity’s shared heritage, the Armenian National Committee of Canada (ANCC) commemorates each December 8 as Cultural Genocide Day.  ANCC calls upon all Canadians to join us in remembering past cultural genocides, working to preserve the riches of our diverse history and celebrating the contributions of threatened indigenous cultures everywhere.  ANCC also calls upon the Canadian government to condemn the destruction of the Djulfa Armenian cemetery and Azerbaijan’s policy of cultural genocide against its indigenous peoples.

In an extensive report published in February 2019 and widely distributed in the arts community, researchers Sarah Pickman and Simon Maghakyan concluded that for the past thirty years, Azerbaijan has continuously engaged in a process of systematically destroying all traces of Armenian indigenous culture from Azerbaijan and the Republic of Artsakh. (The full report could be accessed at the following link: https://hyperallergic.com/482353/a-regime-conceals-its-erasure-of-indigenous-armenian-culture/)

“The report concluded that Azerbaijan’s covert operations to destroy these artifacts exceeded the crimes committed by ISIS, while destroying the city of Palmyra in Syria” said Shahen Mirakian, co-president of the ANCC.

“In addition to continuous threats to eradicate Armenians from Artsakh and attacking Armenia proper, Azerbaijan’s destruction of irreplaceable Armenian heritage is another element of its state-sanctioned policy of hatred towards the Armenian people” said Hrag Tarakdjian, co-president of the ANCC.

Despite conclusive evidence and condemnation by the European Parliament and other international bodies, Azerbaijan categorically refuses to accept responsibility for its crimes or end its policy of cultural genocide.

“Canada and other western countries should safeguard the cultural treasures of the world and take concrete action against rogue states such as Azerbaijan that demonstrate absolutely no respect to cultural heritage, history and human rights.  By ignoring Azerbaijan’s blatant policy of eradicating all physical elements of the indigenous Armenian culture and rewriting history to erase the presence of Armenians, Canada is encouraging cultural genocide and endangering indigenous peoples everywhere” concluded Tarakdjian and Mirakian.