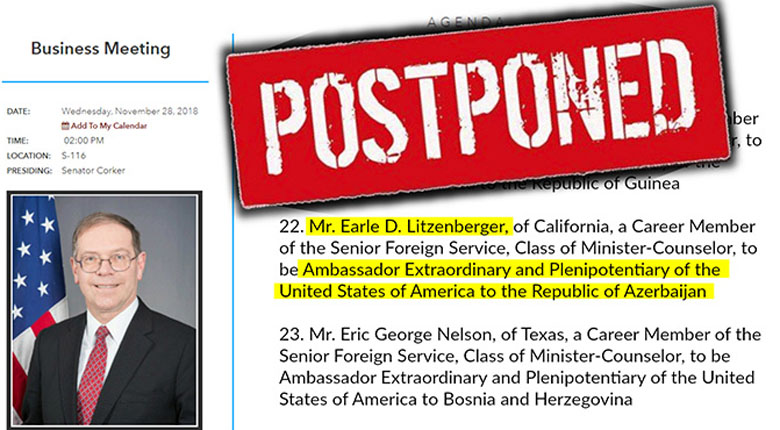 WASHINGTON, DC – In a move welcomed by the Armenian National Committee of America (ANCA), the Senate Foreign Relations Committee postponed a vote on President Trump’s nomination of Earle Litzenberger to serve as Ambassador to Azerbaijan – amid growing concerns across Capitol Hill over a recent call by National Security Advisor John Bolton for U.S. arms sales to the increasingly reckless and aggressive Aliyev regime. Mr. Litzenberger was the only one of 19 ambassadorial nominations to be postponed, very likely until next year, when the panel will hold its next business meeting.

“We join with our Senate friends in seeking greater clarity on this point, and, more generally, regarding the Administration’s policy on Aliyev’s worsening pattern of aggression against Artsakh and Armenia, incitement of hatred against all Armenians, unapologetic blacklisting of U.S. legislators, obstruction of the Royce-Engel peace proposals, threats to shoot down civilian aircraft, the destruction of the Djulfa cemetery and other Christian heritage sites, and – of course – his severe crackdown against domestic dissidents and ethnic-religious minorities.”

During the October 4th confirmation hearing, Senate Foreign Relations Committee Ranking Democrat Bob Menendez (D-NJ) grilled Mr. Litzenberger about President Aliyev’s “bellicose rhetoric and sporadic outbursts of violence,” securing from the nominee a commitment that he would urge the Azerbaijani government to step back from any threatening behavior that disrupts the line of contact. Asked by Sen. Menendez whether U.S. security assistance to Azerbaijan should be curtailed based on human rights abuses, Litzenberger responded that the State Department will be “very careful to ensure that nothing that we do or provide [in terms of U.S. security assistance] to Azerbaijan undermines the effort to reach a peaceful settlement of the Nagorno Karabakh conflict.” He went on to note that U.S. security assistance to Azerbaijan will continue to include training in human rights, a point of heightened concern since the Safarov scandal.

Following the hearing, both Sen. Menendez and Sen. Ed Markey (D-MA) submitted written questions to Mr. Litzenberger – and may follow up with additional inquiries regarding statements made by National Security Advisor John Bolton during his late October trip to the Caucasus calling for arms sales to Azerbaijan and Armenia.