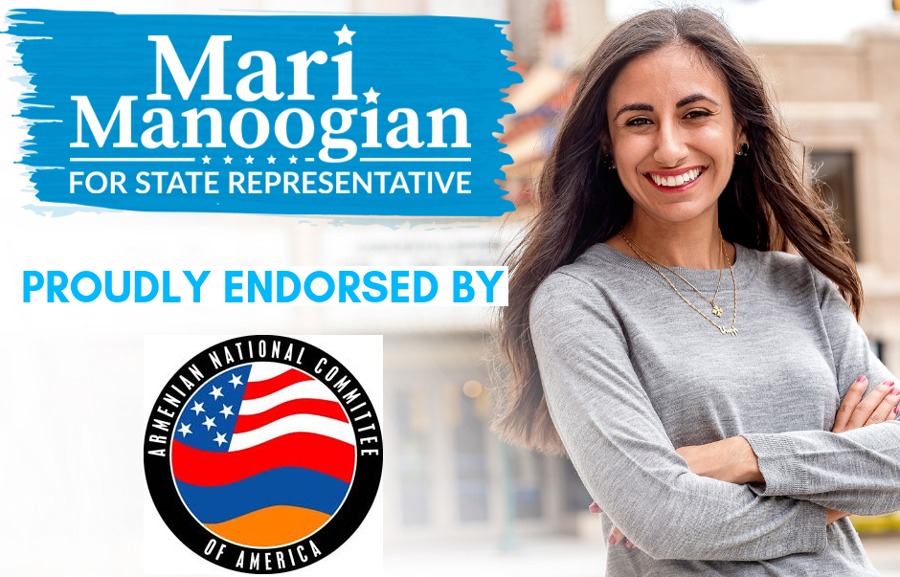 Birmingham, MI – Mari Manoogian, the Democratic candidate for Michigan’s 40th State House district, has received the enthusiastic endorsement of the Armenian National Committee of America (ANCA), as she marches toward victory on November 6th.

“We are so incredibly proud to support Mari, who stands up for what is in the best interests of the entire district,” said Lara Nercessian, Chairwoman, ANC of Michigan, who has been an ardent supporter since Manoogian announced her candidacy last year. “She is a proud and strong member of our community and one that will shine a light on the district, foster growth and create change.”

“I am honored to receive the endorsement of the Armenian National Committee of America. The advocacy work done by the ANCA to promote the best interests of Armenians in the U.S. and around the world is vital to engaging the public on important issues like genocide education awareness and recognition. We are also grateful for the support we received from the ANC-Michigan, which helped us build momentum in the early days of our campaign. I look forward to sharing the stories of the 17,000 Armenian Americans living in Michigan, including the 11,000 Armenian Americans living in Metro Detroit, and fighting for the best interests of all Michiganders when I am elected to the state legislature.”

Manoogian is a great-grandchild of survivors of the Armenian Genocide from Sepastia and Keghi on her mother’s side, and Yerzinga and Keghi on her father’s side. Her family settled in Metro Detroit. Manoogian attended the Armenian Relief Society (ARS) Zavarian Armenian language school in Troy, Mich. for 10 years. She also participated in the St. Nersess Armenian Seminary summer conferences and was active in the Armenian Youth Federation (AYF) and Armenian Church Youth Organization of America (ACYOA). She is an active member of the AGBU Young Professionals in Detroit, and worked at AYF Camp Haiastan in Massachusetts and Hye Camp in Illinois.

Born and raised in Birmingham, Michigan, she attended Birmingham Public Schools and graduated from Seaholm High School. She attended the George Washington University where she earned her degree from the Elliot School of International Affairs. During her tenure as an undergraduate, she interned for former Congressman John D. Dingell, the Council on Foreign Relations and Ambassador Samantha Power at the U.S. Mission to the United Nations. Upon graduation, she worked in the Office of English Language Programs and the Office of eDiplomacy at the U.S. Department of State where she began her career in public service. During this time, she completed a graduate degree in Global Communication at GW.

Manoogian has run an exemplary campaign, beating formidable primary opponent Nicole Bedi by a 53 to 47 margin. She has received a broad range of endorsements from federal, state and local leaders including President Barack Obama, Senator Gary Peters and former State Senator Gretchen Whitmer and a myriad of local media, union and civic organizations.

For more information about the ANCA and its endorsements, please visit: https://anca.org/.