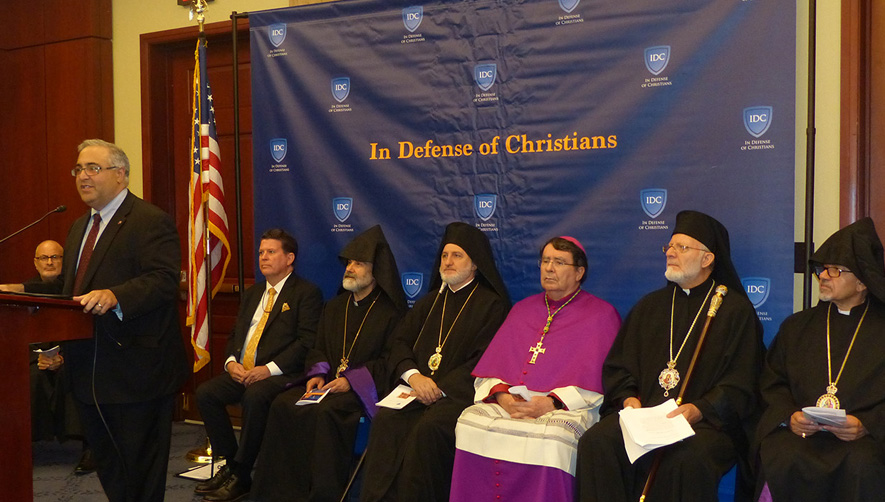 WASHINGTON, DC –The Armenian National Committee of America (ANCA) joined with Eastern and Western U.S. leaders of the Prelacy of the Armenian Apostolic Church of America and In Defense of Christians last week for a Capitol Hill focus on the plight of Christians in the Middle East that coincided with the U.S. State Department’s Second Annual Ministerial to Advance Religious Freedom.

“As Armenian Americans, we were proud to bring our contribution to last week’s religious freedom initiatives in Washington, DC – including through the lessons that can and must be drawn from our own Armenian experience in surviving genocide and challenging Turkey’s ongoing denials and obstruction of justice for this crime,” noted ANCA Executive Director Aram Hamparian, who was invited to the Ministerial.  “It’s clear that we diminish U.S. credibility – profoundly undermining American global leadership on core atrocities prevention and religious freedom priorities – when, under heavy-handed public pressure, we grant a foreign power a high-profile veto over what the U.S. government can and cannot say about a known case of genocide. Turkey’s undemocratic and openly anti-American leaders revel in the public spectacle of having bullied and bribed the U.S. into silence over its sins for more than a century.  It’s time to end Turkey’s gag-rule against honest American remembrance of the WWI-era genocide and exile of Armenian, Greek, Assyrian, Chaldean, Syriac, Aramean, Maronite, and other Christian nations.”

His Eminence Archbishop Anoushavan Tanielian, Prelate of the Armenian Apostolic Church of Eastern U.S., kicked off the week-long spotlight by offering the opening prayer of the U.S. House of Representatives session on Monday, July 15th, at the invitation of Armenian American Congresswoman Jackie Speier (D-CA) and U.S. House Chaplain Patrick Conroy.  “Heavenly Father, your children gathered here in this sanctuary of democracy and freedom thank thee for your providential care, full of visible and invisible blessings,” began Archbishop Tanielian.  “Grant your wisdom and love upon the members of this assembly to follow thy will and fulfill their awesome responsibility toward the land of the free and the world at large,” continued Archbishop Tanielian, whose prayer was broadcast on C-SPAN and is available online here: https://youtu.be/A6mePZfHdS4

Later that day, the ANCA joined Members of Congress and clergy including Archbishop Tanielian, His Eminence Moushegh Mardirossian, Prelate of the Armenian Apostolic Church of the Western U.S. and Christian leaders from the Antiochian Orthodox Church, Assyrian Church of the East, Evangelical Protestant tradition, Greek Orthodox Church, Mainline Protestant tradition, Maronite Catholic Church, and Roman Catholic Church for a press conference and first-ever prayer service in the U.S. Capitol by Middle Eastern Christians.

During the press conference and prayer, organized by In Defense of Christians, speakers stressed the importance of a commitment to truth and decisive action to ensure religious freedom for all, including the Christian and other persecuted minorities of the Middle East.

“The right to worship must be protected throughout the globe,” explained House International Religious Freedom Caucus Co-Chair Gus Bilirakis (R-FL) in opening remarks. Rep. Bilirakis, who also serves as co-Chair of the Congressional Armenian Caucus, noted the difficult plight of the Greek community and other Christians in Turkey. “There only approximately 1200 Greek Orthodox Christians left in Constantinople (and it will always be Constantinople to me) … a place where the Turkish Government refuses to recognize the ecumenical nature of Patriarch Bartholomew,” said Rep. Bilirakis, who noted that the Turkish Government has closed the theological school in Halki since 1971.  Complete video of Rep. Bilirakis’ remarks is available here: https://youtu.be/p2UQGZKftnk

Congressional Armenian Caucus Co-Chair Jackie Speier thanked all clergy present “for reminding us that every day we should be spending our waking moments thinking about those who don’t have the privilege of practicing their Christian faith in public.  I am of Armenian descent.  One and a half million Armenians in the early 1900’s were killed because of their religion.  We see the potential of that happening even now.”  Complete video of Rep. Speier’s remarks is available here:  https://youtu.be/vSWMbS3hJms

Rep. Ann Eshoo (D-CA) explained that the In Defense of Christians’ work and efforts for international religious tolerance are very personal to her.  “There is representation here from my father’s side of the family – the Assyrians and Chaldeans – and my mother’s side – the Armenians.  I am first-generation American.  I would not be a Member of Congress unless they were able to flee and survive. And so, I see and have seen history repeating itself.  It is a repeat of what they endured, of the family that they lost, and we need to always learn and have the lessons of history speak to us.”  Rep. Eshoo noted the historic Congressional vote characterizing the attacks on Christians and other minorities in the Middle East as ‘genocide,’ but noted that success has been elusive given the great need and the slow U.S. response over multiple U.S. administrations.  Video of Rep. Eshoo’s complete remarks is available at: https://youtu.be/qZwpM2XnQuw 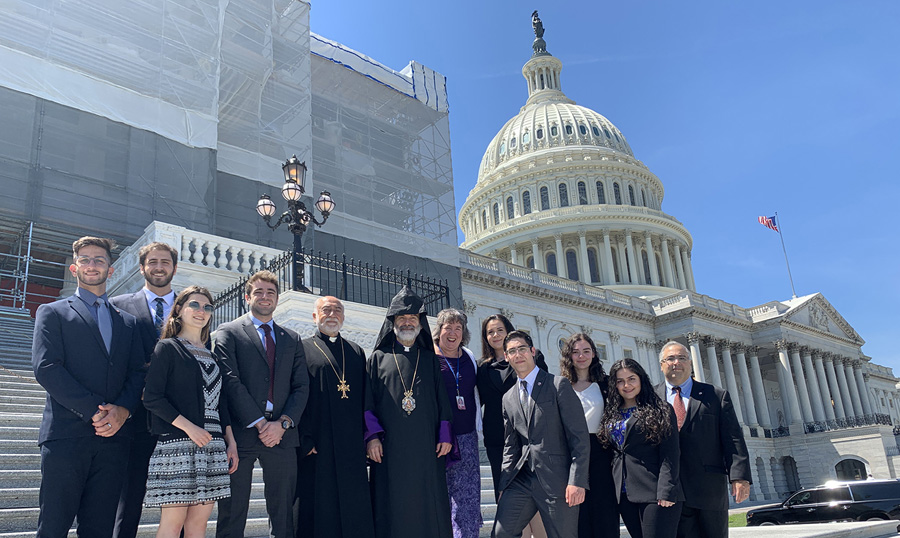 Hamparian, in discussing U.S. policy on the Armenian Genocide, explained that, “when we can get the U.S. on the right side of the Armenian Genocide issue, certainly it’s going to be good for Armenians because denial will be challenged, but more importantly, it will be a tipping point in U.S. policy where we finally say that fighting against a genocide against any people – Armenians, Rwanda, Cambodia, Darfur, or the Holocaust – is a moral imperative and not a political commodity.”  Video of Hamparian’s complete remarks is available here: https://youtu.be/jFLnl3j6Q4Y

Later in the week, the ANCA took part in the State Department’s Second Annual Ministerial to Advance Religious Freedom, joining over 1000 civil society and religious leaders, and more than 80 foreign delegations.  Hamparian participated in sessions outlining successes from the first Ministerial in 2018, including funding for emergency assistance to victims of religiously motivated discrimination and abuse around the world.  Participants agreed that much more needed to be done to address growing religious intolerance worldwide.

During the conference, Armenia Foreign Minister Zohrab Mnatsakanyan highlighted the country’s commitment to religious tolerance, noting that in the face of recurring violence against the Yezidis and Christians in the Middle East, Armenia has served as safe-haven to over 20,000 refugees.  “Armenia stands ready to cooperate with all interested parties to recover ancestral presence of Christians in the Middle East by rebuilding their lives, communities and churches,” stated Mnatsakanyan.  “The Armenian people historically have been significant contributors to diversity, harmony and prosperity of the countries and societies of the Middle East.  This conference provides an excellent platform to initiate partnerships to this end.”