A small piece of Armenia in Bangladesh 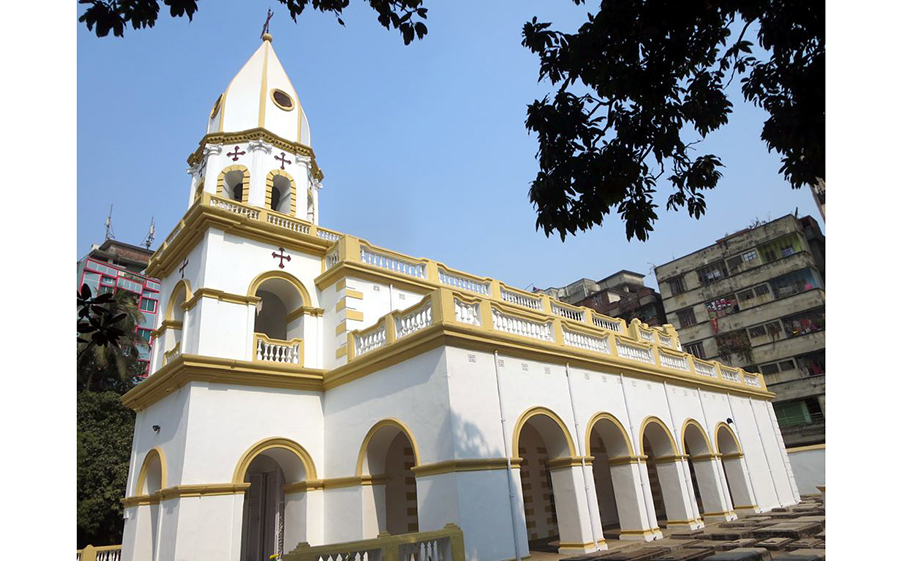 The Armenian Church of the Holy Resurrection (1781) on Church Road in Old Dhaka highlights a rich tapestry of the Armenian footprint on the commerce, politics, and education of East Bengal. More importantly, the church is an architectural testament to the story of how the Armenian diasporas spread out from their historic homeland, located between the Black Sea and the Caspian Sea, to far-flung regions, and thrived as a versatile cosmopolitan community.

Armenia occupies a crucial geographic location at the intersection of various civilisations and trading routes, such as the Silk Road from China to Rome. A vital link between East and West, the country was under the domination of various competing political powers, including the Persians, the Greeks, the Romans, the Arabs, the Persians again, the Ottomans, and the Russians. Their long political subjugation, on the one hand, made it difficult for them to maintain their Christian faith (the Armenians were the first people to embrace Christianity as a state religion in 301 CE), language, culture, and national identity. On the other hand, challenging circumstances exhorted Armenians to be resilient in the face of political repression, to develop entrepreneurial acumen and mediating skills, and to be a “trade diaspora”, who learned through experience how to negotiate commercial opportunities whenever and wherever they presented themselves.

Considered one of the most successful trading groups in the Eurasian trade circuit, the Armenians’ accomplishment was generally attributed to a number of key factors: their ability to identify regions where competition was relatively sparse, their deep understanding of markets and products, interdependency among the Armenian diasporas, their capacity to thrive on low profit margins, their diplomatic skills, and ability to successfully compete with other merchants. Wherever the Armenians went to trade, they typically learned the local language—unlike other Asian or European merchants—benefitting from their capacity to communicate with primary producers. It was no surprise that the Europeans in Bengal wanted the Armenians as business partners, and employed them as vakils to mediate at the local court or office on their behalf.

The Armenians also played a significant role in the history of world architecture. In the early medieval period, when the Byzantine world abandoned classical stonework in favour of brick masonry (the 6th-century Hagia Sophia is basically a brick construction), only the Armenians retained the knowledge of concrete work and continued the Hellenistic attitude to buildings as a compact, object-like impression in space. Their contribution had a crucial influence on subsequent development of church architecture in Europe.

There is no consensus on exactly when the Armenians arrived in Dhaka. Some historians, however, suggest they were in Bengal in the early 17th century, most likely arriving with the southbound migration of Armenian diasporas from Persia. During the Safavid-Ottoman wars of 1603-1605, the Safavid monarch Shah Abbas (r. 1587-1629) deported up to 300,000 Armenians from the Armenian mercantile town of Old Julfa to what became known as New Julfa in the suburb of Isfahan. Because the official language of the Mughal court was Persian, the Persian-speaking Armenians could easily adapt to the life in the Mughal Empire. Being skilful at textile business, the Armenians naturally gravitated to Dhaka, one of the trading hubs for fine textile, contributing significantly to the city’s commercial life. According to one estimate, their share of textile export from Dhaka in 1747 is reported to be as large as 23 percent of that year’s total export, way ahead of the English, the Dutch or the French in Dhaka. In addition to textile and raw silk, the Armenians also engaged in the trade of saltpetre (used as gunpowder), salt, and betel nut. They pioneered jute-trading in the second half of the nineteenth century and popularised tea-drinking in Bengal. When they began to lose the textile business to the British private traders in the late 18th century, the Armenians reoriented their focus to landholding, eventually becoming prominent and wealthy zamindars. Examples of Armenian zamindars in Dhaka include Agha Aratoon Michael, Agha Sarkies, and Nicholas Marcar Pogose.

The Armenian community contributed significantly to Dhaka’s civic life and urban administrative bureaucracy. Nicholas Pogose founded the first private school of the city, Pogose School, in 1848. It still functions as a prestigious school in Old Dhaka. In response to Nicholas Pogose’s resolution that the Dhaka Municipality Committee had no corporate entity, and that steps should be taken to remedy the problem, the British colonial administration enacted the District Municipality Act of 1864. The Dhaka Municipality became a statutory body with its legal jurisdiction.

Compared to those in Calcutta and Madras, Dhaka’s Armenian community was small but wealthy, exerting a great deal of influence on local and regional businesses. It was a well-knit community, living in Armanitola, an Old Dhaka neighbourhood or mahalla that was named after their colony where they once lived (although not all Armenians lived there). They maintained a close working relationship with the British colonial administration and other European merchants in the city, as well as with their kinsmen in Kolkata. According to an 1870 survey, there were 107 Armenians in Dhaka, of whom 39 were men, 23 women, and 45 children. Among this group, there was a priest, five zamindars, three merchants, one barrister, five shopkeepers, and four government employees.

Many of Dhaka’s wealthy Armenians lived in European-style bungalows in Old Dhaka, one of the most famous being the Ruplal House (now in derelict conditions) built by the Armenian zamindar Aratoon. The religious life of the community revolved around the Armenian Church of the Holy Resurrection, built in 1781 on the ruins of an earlier chapel and cemetery. It is worthwhile to note that the Armenians built their first churches in Madras (now Chennai) in 1547, in Agra in 1562, and in Calcutta in 1724.The Portuguese built the first church in Dhaka in 1679 and reconstructed it in 1769, a decade or so before the Armenians built their church in Old Dhaka.

The Armenian Church of Nazareth, in Barrabazar, Kolkata. Photo: Grentidez/Wikimedia

It was a time of great political turmoil. When Warren Hastings became the Governor-General of Bengal in 1773, the British colonial administration of the territory still remained underdeveloped. Away in the New World, North American colonists under the leadership of General George Washington defeated the British forces led by Lord Cornwallis at the Battle of Yorktown in 1781. The political heat was rising rapidly in pre-Revolution France. Amidst the chaotic times, many communities urgently felt the need to preserve their national and ethnic identities. The Armenians in Dhaka were no exception, as they sought to solidify their identity through the language of architecture.

The land for the Armenian Church was originally gifted by the Armenian noble man Agha Catchick Minas, whose wife died in 1764 and is buried inside the church. The church galvanised the community around the Sunday mass and other religious festivals. Later in 1840, Lt. Colonel Davidson of British Bengal Engineers provided a vivid portrayal of the Christmas celebration at this church.

The Armenian Church stands today like a quiet and dignified monument amidst the frenzied urban growth surrounding it. Residential apartment towers dwarf its two-story structure and the belfry or the bell tower. The oblong plan of the church is a simple basilica type with a double-height nave flanked by two one-story, 14-foot wide arcades which open to the surrounding graveyard. The three-tier bell tower, capped with a conical roof, on the west provides a square-shaped and arched vestibule, followed by a ceremonial entrance to the nave. Running along the east-west axis, the nave space is boldly articulated by five heavy piers on either side. The piers are spanned by both doors and windows. The central processional aisle of the nave is flanked by rows of wooden pews, creating a linear progression of space toward a semi-circular apse. The eastern end of the nave is visually framed by a tall arch, behind which is the projecting apse containing an elevated altar. A10-foot tall wooden altar piece there contains an artistic depiction of the Last Supper. Two identical sanctuaries, accessible from the nave, flank the apse. Located above the roof line of the aisles, skylights along the nave walls, bring light deep inside the church. On the left as one enters the nave space, there is a circular, wooden staircase ascending to the second floor gallery overlooking the nave, and then to the third floor of the belfry.

Although the style of the church seems somewhat eclectic at first, a closer inspection reveals that its typology is based on typical features of Armenian church architecture. The bell tower’s ribbed conical steeple, surmounted with a cross, is common to well-known examples of Armenian churches. They include:  the Cathedral of Holy Etchmiadzinnear Yerevan in Armenia (originally built in the 4th century and rebuilt in its present form in the 17th century; this is considered the oldest church in the world); St. Hripsime in Echmiadzin, Armenia (rebuilt in 618 CE); the Armenian Church on Lake Van in the East Anatolia Province, Turkey (10th century); and the Armenian Church (1924) near the Howrah Bridge in Kolkata. All of these examples have the paradigmatic “drum-and-cone pattern,” that inspired Dhaka’s Armenian Church. The arched base of its bell tower that acts as a pronaos for the church proper is common to all the examples mentioned above except the one in East Anatolia. The circular windows facing cardinal directions that we find on the steeple of the Dhaka church are strikingly similar to those of the Armenian Church in Kolkata. An interesting feature of the church in Old Dhaka is how its belfry is balanced out on the east, where the balustrade on the nave roof culminates in a Baroque crown-like detail with a cross on top and an elliptical opening at the centre.

The high boundary wall around the Armenian Church in Dhaka shields the property from rampant land speculation that characterises the capital city today. The main entrance to the site is from the east near the circular apse. Visitors must walk through the graveyard all the way to the western forecourt of the church. Reading the tombstones of the graveyard feels like a journey back to a time when the Armenians played pivotal roles in the life of the city. The church, along with its sombre graveyard, in the midst of noisy city life, seems like a dignified and somewhat melancholic symbol of a distant past.

It is somewhat ironic that there is a place (unofficially) called Bangladesh in the suburb of the Armenian capital city of Yerevan. The district’s real name is Malatia-Sebastia, named after the modern Turkish cities of Malatya and Sivas. The answers to why this rather desolate suburban Armenian town is called Bangladesh is both elusive and contentious. It depends on who you ask. Some think, rather pejoratively, that it is called Bangladesh as a synonym for the town’s remoteness, mental distance, poverty, and blighted economic landscape. Yet, some people locate the origin of this unlikely name in the empathy the Armenian people felt for Bangladesh in 1971, when Bengalis became the victims of Pakistani military’s genocidal campaign. There is no suburb of Yerevan called Pakistan!

There is one common narrative that cuts through all these disparate stories. The human story, or history, can’t be articulated with the misplaced spirit of nation-centrism. We, the people of the world, are interconnected in all kinds of unexpected ways. History should be written in a way that it highlights our shared experiences, lived and imagined. Histories of Bangladesh, for example, can never be pigeonholed within its modern political boundaries. Some of the best sources of Bangladeshi history are found in England, Holland, and Portugal, among other places.

Adnan Morshed, PhD, is an architect, architectural historian, urbanist, and columnist. He teaches at the Catholic University of America in Washington, DC, and serves as Executive Director of the Centre for Inclusive Architecture and Urbanism at BRAC University.