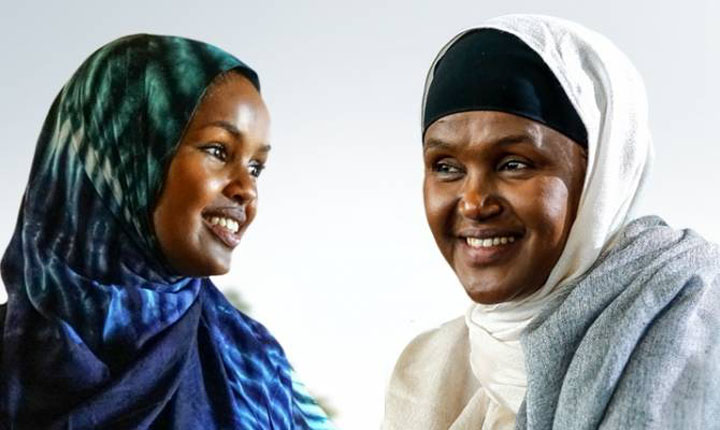 The Aurora Humanitarian Initiative awarded the fifth annual Aurora Prize for Awakening Humanity to Fartuun Adan and Ilwad Elman, the mother and daughter team who lead the Elman Peace and Human Rights Centre in Somalia.

As Aurora Prize Laureates, they will receive a US $1,000,000 award and a unique opportunity to continue the cycle of giving by supporting the organizations that have inspired their humanitarian action. Fartuun Adan and Ilwad Elman have selected three organizations – Love Does, Panzi Foundation, and Prajwala – that fight for freedom and human rights, provide healthcare to marginalized populations, and save victims of sex-trafficking to be the beneficiaries of their million dollar prize.

Fartuun Adan and Ilwad Elman were chosen among the 2020 Aurora Humanitarians, or finalists, announced on April 24, 2020. Besides the Somali human rights defenders, these outstanding heroes include Congolese activist Angélique Namaika, refugee rescuers Sophie Beau and Klaus Vogel, and educator Sakena Yacoobi from Afghanistan.

To date, Aurora has launched or supported numerous projects in nearly 30 countries, benefitting almost a million people suffering from the atrocities of war, famine, lack of healthcare, genocide or human rights violations. Granted on behalf of the survivors of the Armenian Genocide and in gratitude to their saviors, the Aurora Prize seeks to expand the global humanitarian movement by enabling humanitarians worldwide to continue the cycle of giving.

Fartuun Adan and Ilwad Elman have been protecting women’s rights, promoting peacebuilding, and rehabilitating child soldiers for many years. Their courage, resilience, and unwavering commitment to the people of Somalia has brought this mother and daughter team global recognition.
“Fartuun Adan and Ilwad Elman embody the spirit of the Aurora Prize and our philosophy of Gratitude in Action, and we are delighted with this opportunity to express our deepest admiration and appreciation to them for the amazing work they are doing in Somalia. They give people a second chance, hope for the future, and inspiration to lead a meaningful life. Their courage, self-sacrifice, altruism, idealism, as well as actions on the ground reflect the values of the global Aurora movement,” noted Vartan Gregorian, President of Carnegie Corporation of New York, Co-Founder of the Aurora Humanitarian Initiative, and Member of the Selection Committee.

Lord Ara Darzi, Co-Director of the Institute of Global Health Innovation at Imperial College London and Chair of the Aurora Prize Selection Committee, noted in his video announcement of the Laureates, “2020 has been a tumultuous year, but as with all crises, it has brought us together. Amidst the COVID-19 pandemic, many new modern-day heroes like Fartuun Adan and Ilwad Elman emerged, reminding us of our common humanity.”
“For the last five years, Aurora has been spreading the message that acts of kindness make a difference when you add them up, and Fartuun’s and Ilwad’s courageous activism is a vivid testament to that,” said Samantha Power, Harvard professor, former U.S. Ambassador to the United Nations and Aurora Prize Selection Committee member.

Previous Aurora Prize Laureates include Burundian activist Marguerite Barankitse (2016), American physician and missionary Dr. Tom Catena (2017), Rohingya human rights campaigner Kyaw Hla Aung (2018) and Yazidi activist Mirza Dinnayi (2019).
On October 19, 2020, a special Gratitude in Action virtual event will be broadcast live from the New York Public Library to celebrate Aurora’s fifth anniversary by honoring the Aurora Prize Laureates and paying tribute to New York City COVID-19 heroes. A live event will also be held in March 2021 in New York City, along with an ecumenical service to commemorate those who fell victim to the coronavirus.
The funds raised at the events will help to continue the efforts of the Aurora Humanitarian Initiative and the Aurora Prize Laureates. You can join Aurora and support Gratitude in Action by making a contribution and learn more at www.auroraprize.org.

About the Aurora Prize for Awakening Humanity

The Aurora Prize for Awakening Humanity is a global humanitarian award. Its mission is to recognize and support those who risk their own lives, health or freedom to save the lives, health or freedom of others suffering as a result of violent conflict, atrocity crimes or other major human rights violations. The Aurora Prize Laureate is selected based on the nominee’s demonstration of courage, commitment and impact. On behalf of the survivors of the Armenian Genocide and in gratitude to their saviors, an Aurora Prize Laureate is honored each year between 2015 and 2023 (in remembrance of the eight years of the Armenian Genocide 1915-1923) with a US $1,000,000 award, which gives the Laureate a unique opportunity to continue the cycle of giving and support the organizations that have inspired their humanitarian action.