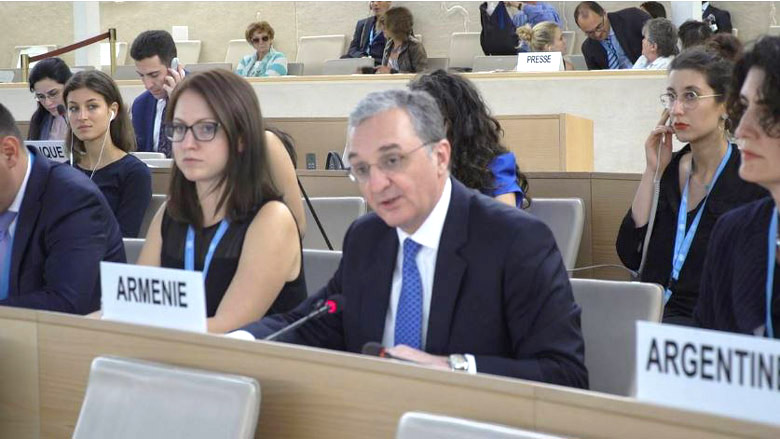 Armenian foreign minister Zohrab Mnatsakanyan has delivered opening remarks at the High-Level Panel on 70th Anniversary of the Convention on Prevention and Punishment of the Crime of Genocide in the UN Human Rights Council in Geneva, the foreign ministry said.

Below is the transcript of the minister’s speech:

It is indeed truly thrilling to be back in Geneva, in the Human Rights Council after exactly ten years since I relinquished my post as the then Armenia’s Ambassador to the UN Office in Geneva. It is also ten years since the first Armenia sponsored HRC resolution 7/25 of 28 March 2008 on the Prevention of Genocide was adopted by consensus. Since then we have been regularly and consistently developing the normative framework for prevention. It is particularly symbolic for me to share a panel with all the distinguished panellists with a profound record and commitment to advancing the prevention agenda internationally, and in the UN in particular. This event is taking place as a result of the unanimous decision of this Council, as reflected in the respective paragraph of Resolution 37/26.

For 20 years since 1998 Armenia has been consistently working within the UN and with its many partners towards raising awareness of the 1948 Convention on the Prevention and Punishment of the Crime of Genocide, of the continued risks and challenges related to atrocity crimes, and towards building legal and institutional capacity to prevent. Therefore, it is an opportunity in my new capacity and from this podium to reconfirm Armenia’s firm commitment and resolve towards a continued effort to advancing the human rights agenda, preventing atrocity crimes, including genocides.

In this panel I am very honoured to be in the company of persons with extraordinary prominence and expertise in the field of prevention. I want to congratulate High Commissioner Michelle Bachelet on her appointment and assure her of Armenia’s unwavering support. I am particularly pleased to share this panel with Special Adviser Adama Dieng. We have been quite consistent in New York in working towards this agenda, including since 2015, when the UN General Assembly by its resolution 69/323 unanimously proclaimed 9 December as the International Day for the Commemoration and Dignity of the Crime of Genocide and for the Prevention of this Crime. Together we have been persistent in using the International Day as an important platform for advancing the prevention agenda within the UN. Today, together with all the distinguished  panellists we do this in Geneva.

Before I go any further and having in mind the upcoming 70th Anniversary of the Convention this coming 9 December, I want to acknowledge and pay tribute to Raphael Lemkin, a profound lawyer who had dedicated his entire life to challenging and confronting the right to kill behind the thick curtain of sovereignty, elaborating the legal term of genocide and endorsing international responsibility upon sovereign states to protect their populations from the crime of genocide. Of course, I want  also to pay tribute to every single national and international activist, advocate, expert and practitioner of the difficult challenge to stand up and prevent atrocities, massive crimes and genocides. I want to recall, in particular, Benjamin Whitaker, who back in 1985 in a landmark document, known as the “Whitaker report”, for the first time initiated the idea of establishing an impartial international body concerned with the prevention of genocide. Unfortunately it took a long time and more genocides to occur before the international community took heed of what the late Secretary General Kofi Annan termed “complicity with evil” and endorsed, back in 2004, his proposal for tangible, yet still modest mechanisms for the prevention of genocide.

I want to thank Special Adviser Dieng and all his predecessors for the consistent action towards changing the culture of this organisation from that of reaction to one of prevention. I want to thank Secretary General Antonio Guterres for his commitment to sustain the Joint Office of the Special Advisers for the Prevention of Genocide and for the Responsibility to Protect, and for consistently promoting the critical functions of early warning and early action in the prevention of genocide.

This is the XXI century. We mark 70 years since we have adopted the Convention and committed never again to allow this crime to happen. We have uttered “Never Again” so many times since, yet genocides have not been fenced off. Tendencies of radicalism, exclusion and hatred are rattling the international agenda. Particularly troubling is the conspicuous decline in the international commitment to multilateralism and respect for human rights at a time when we need more international cooperation and stronger institutions for this, especially the United Nations.

Genocides may not be occurring too often, but seldom as they may be, they are the ultimate crime. Lemkin’s argument to the sceptics of the need to legislate such crimes has been about the permanent loss of a group targeted with genocides, while the survivors of genocide would be forever deprived of an invaluable part of their identity. We know this from experience.

Four months before 9 December I remind about the upsetting statistics about the status of ratifications and accessions to the Convention on the Prevention and Punishment of the Crime of Genocide. Nearly a quarter of the UN membership delays accession to this core international instrument. On the eve of the 70th Anniversary of the Convention and as a country to have been consistently advancing the prevention of genocide, including within the United Nations, Armenia joins its voice to the appeal of the Special Adviser concerning the universalization of the Convention.

Armenia has been consistently promoting the recognition of the importance and priority of early prevention, which entails sufficient capacity to detect, monitor and address early warning signs of situations, which, if not addressed, may lead to deteriorations beyond control and all the way to the perpetration of massive crimes. Early prevention means early action. Prevention first of all implies legal and institutional capacity, firmly based on political and moral responsibility to protect and promote basic human rights and freedoms for all within the jurisdiction of states. Flawed capacities to secure human rights for all create particular risks for identity-based violations of rights, the ultimate manifestation of which, as we know all too well, is genocide, war crimes and crimes against humanity. Consistent and determined protection of fundamental human rights defines a notion of responsibility to prevent. Indeed, prevention should be viewed as a responsibility to be delivered first of all at a national level. Solid national institutions, an active, diverse and robust civil society, free media and academia contribute towards ensuring transparency and accountability.

Prevention at the international level requires continued integrated approach and action across the board, intertwined with the three pillars of security, development and human rights. The human rights and preventive machinery within the UN system has over years generated considerable capacity to detect risk situations, to gather and analyse early warning signs and to deliver it to the membership. The role and functions of the available human rights mechanisms, the Office of the High Commissioner, the special procedures, treaty bodies and the UPR process deserve sustained focus and utilisation, as they are indeed well placed to secure collaborative action aimed at early prevention. I draw attention, in particular, to the practical proposals of the Special Adviser concerning systematic and structured approach within the UN to information gathering, analysis and dissemination of early warning signs, as well as support to regional arrangements and member states in developing effective early warning systems. The international community and the UN system should be resolute in reacting to all patterns of discrimination and targeting of vulnerable groups, to hate speech, radicalism and incitement to hatred.  Denialism and impunity are fundamental obstacles to prevention. Justice denied haunts generations of genocide survivors and obstructs genuine reconciliation.

Finally, Mr. President, the role of education for the promotion of a culture of respect for human rights is indispensable functions of prevention. By having established a Global Forum Against the Crime of Genocide back in 2015, Armenia offers a solid platform for international co-operation for the prevention of genocide. The third Global Forum to take place in Yerevan on 9 December 2018 will gather a prominent list of scholars and practitioners of genocide prevention and will particularly focus on the role of education. Armenia is duty bound and resolute to contribute to the collective international effort in prescribing remedies to prevent future genocides. I conclude with the reiteration of a deep conviction that “never again” should be uttered once and for all.

Thank you very much, Mr. President.”