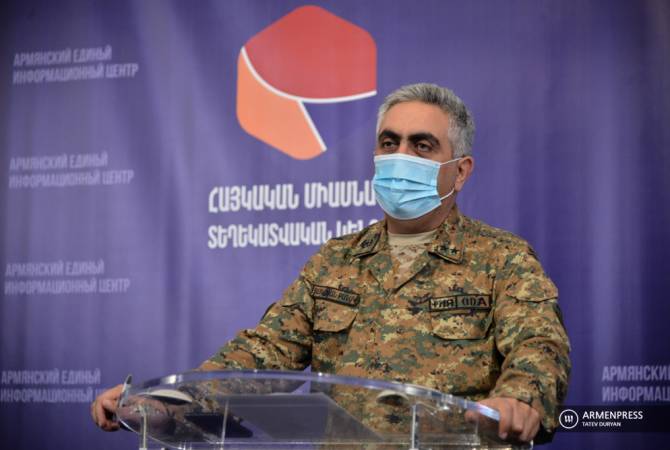 440-450 Azerbaijani soldiers and terrorists have been killed on Artsakh-Azerbaijan contact line clashes on October 3, ARMENPRESS reports representative of the MoD Armenia Artsrun Hovhannisyan said in a press conference.

‘’According to the summarized information for October 3, 21:00, the adversary has suffered 440-450 manpower losses, which includes servicemen and non servicemen-terrorists. 800-900 are injured. 45 armored vehicles were destroyed during combat operation and 8-9 dozens were destroyed before starting combat mission. 3 aircrafts, 1 helicopter, 10 UAVs and 3 ‘’Smerch’’ systems were also destroyed’’, Hovhannisyan said.

Artsrun Hovhannisyan noted that today’s military operations were extremely fierce and tense in the northern and southern parts of Artsakh. The adversary attempted to break through the front line, but after fierce clashes the Armenian side was able to stop that operation. Non stop clashes continued for 6-7 hours.