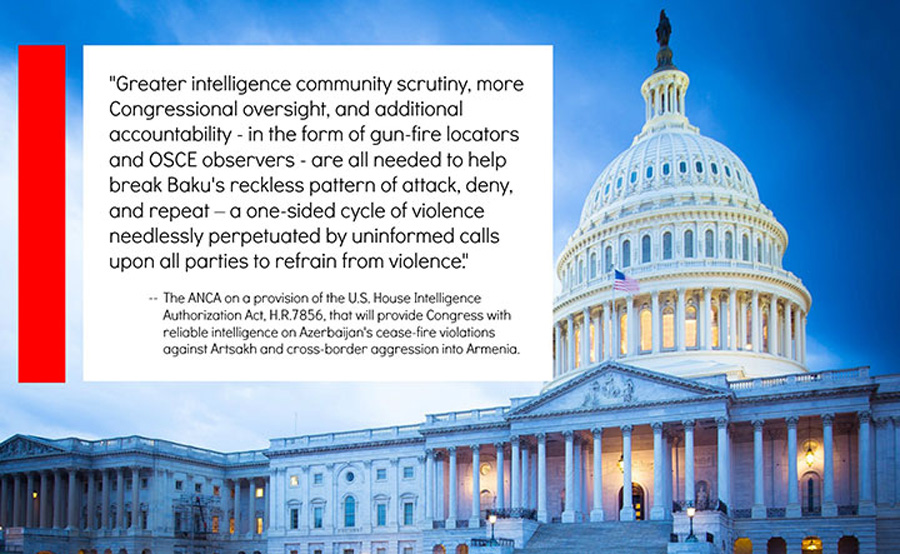 WASHINGTON, DC – In a pro-accountability move that will help check Azerbaijani aggression and contribute to the stabilization of the 1994 cease-fire, the U.S. House Permanent Select Committee on Intelligence – chaired by Rep. Adam Schiff (D-CA) – has included a provision in the Intelligence Authorization Act calling upon the U.S. intelligence community to provide Congress with a written assessment regarding which side is initiating the use of force in and around Nagorno Karabakh (Artsakh) and the border between Armenia and Azerbaijan, reported the Armenian National Committee of America (ANCA).

“We welcome this provision of the Intelligence Authorization Act as a pro-active measure to ensure that Congress has reliable intelligence on Azerbaijan’s cease-fire violations against Artsakh and cross-border aggression into Armenia,” said ANCA Executive Director Aram Hamparian. “This constructive initiative, in the spirit of the bipartisan Royce-Engel Peace Proposal, will help Congress hold Baku accountable, fact-check its denials, and contribute to a more stable cease-fire.”

“Greater intelligence community scrutiny, more Congressional oversight, and additional accountability – in the form of gun-fire locators and OSCE observers – are all needed to help break Baku’s reckless pattern of attack, deny, and repeat – a one-sided cycle of violence needlessly perpetuated by uninformed calls upon all parties to refrain from violence,” continued Hamparian, who explained the provision on an ANCA Facebook Live video, available below.

SEC. 822. ASSESSMENT REGARDING TENSIONS BETWEEN ARMENIA AND AZERBAIJAN.

(a) Assessment Required.—Not later than 90 days after the date of the enactment of this Act, the Director of National Intelligence shall submit to the congressional intelligence committees a written assessment regarding tensions between the governments of Armenia and Azerbaijan, including with respect to the status of the Nagorno-Karabakh region. Such assessment shall include each of the following:

(1) An identification of the strategic interests of the United States and its partners in the Armenia-Azerbaijan region.

(3) An assessment of the effect of United States military assistance to Azerbaijan and Armenia on the regional balance of power and the likelihood of further use of military force.

(4) An assessment of the likelihood of any further uses of force or potentially destabilizing activities in the region in the near- to medium-term.

(b) Form Of Assessment. – The assessment required under this section shall be submitted in unclassified form, but may contain a classified annex.

The House Select Committee on Intelligence marked up the Intelligence Authorization Act (H.R.7856) on Friday, July 31st. The Senate panel had already approved its version of the measure in June. Upon full House consideration of H.R.7856, the Senate and House Intelligence leaders will iron out differences prior to final approval of the measures.