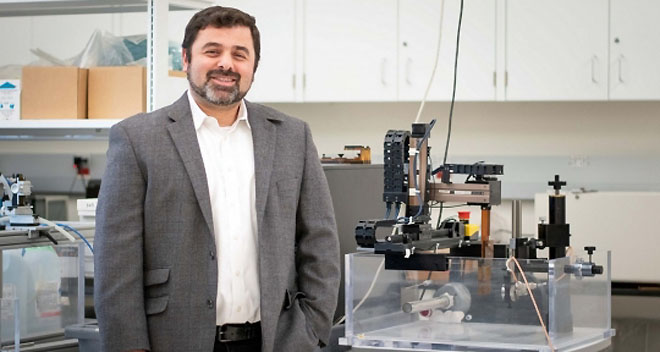 (Ryerson, Faculty of Science)- When St. Michael’s Hospital and Ryerson University launched the Institute for Biomedical Engineering, Science and Technology (iBEST) in 2016, the goal was to bring together researchers from diverse health-related disciplines. By placing multi-disciplinary teams in a clinical setting, iBEST is able to foster the discovery of novel solutions to pressing medical problems.

Recently, a team of researchers from iBEST published some results in the American Journal of Respiratory and Critical Care Medicine that are the sort of breakthrough iBEST’s founders had in mind.

The collaboration in question is between Dr. Raffi Karshafian of Ryerson University, a medical physicist, and Dr. Warren Lee, an critical-care physician at St. Michael’s Hospital and scientist at the Keenan Research Centre. Together, they are developing a treatment for a disease called Acute Respiratory Distress Syndrome (ARDS), a common and devastating complication of critical illness which is notoriously difficult to treat.

“ARDS induces leaking in small blood vessels in the lung, and the accumulated fluid causes abnormally low levels of oxygen in the blood,” says Lee, who is a Tier II Canada Research Chair in Mechanisms of Endothelial Permeability. “The disease also disperses injured areas among healthy regions. Without a method for targeted treatment, we are left to rely on broad approaches like mechanical ventilation, bronchodilators and oral or intravenous drugs, which all have significant drawbacks.”

Roughly one quarter of cases in North America in which a critically ill patient requires mechanical ventilation are a result of ARDS. Among the estimated 18,000 people in Canada who contract the disease each year, there is a 40% mortality rate. Moreover, patients with ARDS routinely endure long and unpleasant hospitalizations and rely on substantial healthcare resources for their continued care.

“My specialization is the use of ultrasound and microbubbles (USMB) to facilitate the delivery of drugs or genetic material in a targeted manner,” says Karshafian, who worked closely with iBEST Co-Director Dr. Michael Kolios to develop the technology. “Dr. Lee has both clinical and research specialization in ARDS. Our hypothesis is that we can use USMB to deliver treatment directly to injured areas of the lung.”

The USMB technology works by injecting drugs or genetic material into microbubbles smaller than a red blood cell and delivering them to an injured area or tumour site. When exposed to ultrasound waves, the bubbles burst and administer the treatment exactly where it is needed.

“In the case of ARDS, we have been able to take advantage of a basic principle of physics,” says Karshafian. “Ultrasound beams do not penetrate air; they only penetrate fluid-filled spaces. That means the USMB will only deliver treatment to injured areas of the lung, thus creating the potential for bona fide precision medicine.”

The team has established the safety and efficacy of this approach and is proceeding with additional trials. They have also partnered with a product development company called MD Precision in order to commercialize the treatment so it is widely available once it is fully developed. In related work, Karshafian is beginning to explore the efficacy of USMB for treating certain types of lung cancer.

“This is a significant breakthrough that combines emerging concepts from ultrasound biophysics and molecular biology to solve a real world critical-care problem,” says Lee. “Given the paucity of treatment options for ARDS, the potential of USMB is compelling.”