Amid growing instances of online hate, organizations call on the Government of Canada to take action 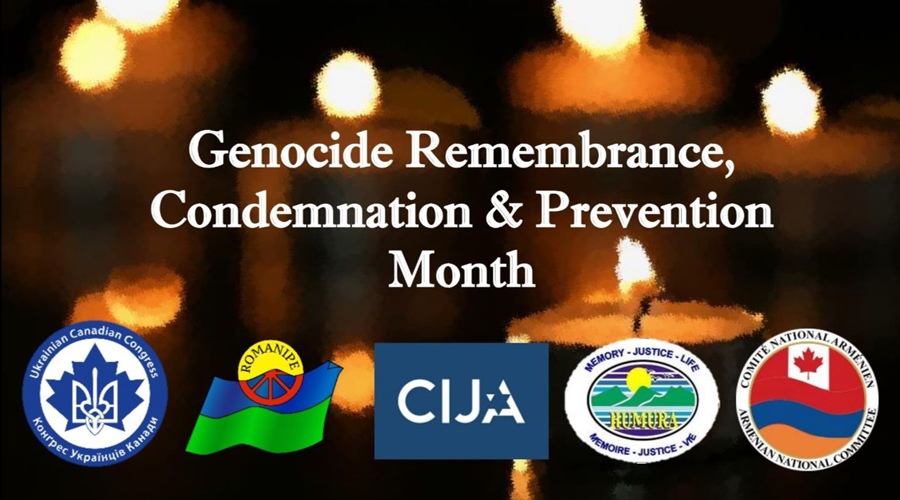 OTTAWA, April 14, 2020— April 2020 marks the five-year anniversary of the passing of Motion M-587 by the House of Commons, recognizing April as Genocide Remembrance, Condemnation and Prevention Month in Canada.

On this occasion, a coalition of advocacy organizations, including the Armenian National Committee of Canada (ANCC), the Centre for Israel and Jewish Affairs (CIJA), the Ukrainian Canadian Congress (UCC), the Humura Association and Romanipe issued the following statement today.

“As we collectively face the Covid-19 pandemic, we are reminded of the importance of solidarity and unity during these difficult times. Time and again, our history has proven that during times of uncertainty and despair, those who are the most vulnerable often face the most challenges.

In light of the current situation, we continue to remain gravely concerned as the recent increase in on-line hate incidents across the country and the globe – even more prevalent as communities and families try to stay connected through online platforms at this time of enforced social distancing –  shows us there is much work still to be done.

We know that in the early stages leading to genocide, words are used to target and dehumanize groups of people. And with so much of the world on-line today, it is essential to combat on-line hate right at the source.  Truly, ‘it starts with words’, and the world needs to be aware and vigilant, in order to effectively confront that hate.

Therefore, we ask the Government of Canada to move forward with its policy on on-line hate based on the work done by the House of Commons Standing Committee on Justice and Human Rights Justice in the last Parliament. Moreover, we urge the Parliament of Canada to re-establish the All-Party Parliamentary Group for Genocide Prevention and to provide the group with the necessary tools and funding to be able to execute its mandate, and to lead the way in fighting genocide and hate.

Our concerted efforts in combatting hate, injustice and discrimination have led us to many achievements and a stronger and more diverse Canada. We remain confident and hopeful that the Government of Canada will continue to work with us and our communities in making sure that ‘Never Again’ truly means ‘Never again’ ”

About the Coalition Partners