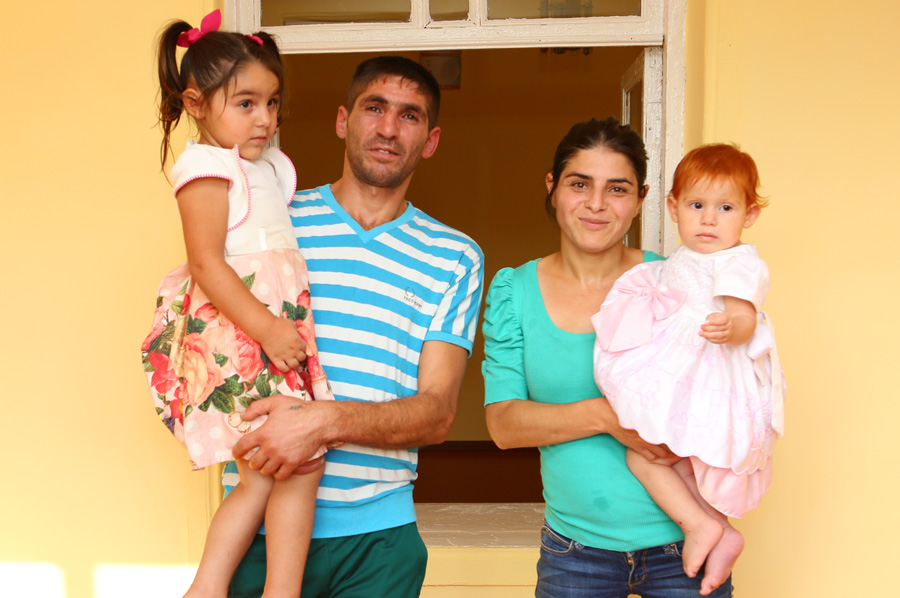 Mher Araqelyan, a soldier wounded in the aftermath of the Four-Day War of April 2016, celebrated housewarming today in the Karmir Shuka village of Hadrut region, Artsakh. The house was purchased and fully renovated by the Tufenkian Foundation, with crowdfunding support from over 100 individuals from across the world.

35-year-old Mher has served in the Artsakh Defense Army for 15 years. In April 2016, the people of Artsakh suffered unprecedented violence, as Azerbaijan launched unprovoked assaults along its eastern border. This escalation has been known as the “April War” or “Four-Day War.”

Mher, a father of two, was one of the soldiers mobilized to protect Artsakh during this war. He was heavily injured at a front-line base near Jibrayil and has since been facing serious health difficulties. As a result, he is prohibited from doing any physical work and is unable to stand for extended periods. Mher is set to undergo another difficult surgery soon.

After Mher was injured and no longer able to serve in the army or find other employment, his family found itself in a difficult financial situation. Mher, his wife and 2 children primarily rely on his disability pension and the support of Mher’s and his wife’s parents. Without a house of their own, the family had do spend most of their small income on rent.

In December 2017, when the family had almost given up the hope of ever having a home of their own, they crossed paths with the Tufenkian Foundation. The Foundation had already given homes to 8 wounded soldiers at this time. Soon after learning about Mher’s situation, the family was promised a new home.

To purchase and renovate a home, the Tufenkian Foundation started a fundraising campaign for the family. 106 persons from across the world responded to the call and contributed to the campaign. Soon after the campaign was over, Mher and his wife chose their new home. The house was purchased by the Tufenkian Foundation and renovation works were launched.

Today, surrounded with neighbors, relatives and guests, Mher Araqelyan’s family celebrated the opening of their new home, a large, well-built and bright house in their native Karmir Shuka village. Representatives of the Tufenkian Foundation, together with guests from the Diaspora, participated in the housewarming ceremony. Congratulating the family and thanking Mher for his services to the homeland, Tufenkian Foundation Executive Director Raffi Doudaklian said “You have done more for Artsakh and all of our nation than we can ever do. We are giving you a home, and you have given us your courage, you have sacrificed your health for our freedom. You and your brothers in arms deserve this support and gratitude more than anyone, and we will continue this work as long as our soldiers need it”.

This is the 10th housewarming celebrated in Artsakh in the framework of Tufenkian Foundation’s “Housing for Wounded Soldiers” initiative. Aimed at supporting families of soldiers in difficult housing situations, the initiative was launched in April 2016, in response to the Four Day War. Since then, with funds raised during the 2016 emergency appeal and through additional support from ndividual donors, 10 houses have been built, renovated or purchased for Artsakh’s wounded soldiers.

Though initially intended to assist soldiers of the April War, the project was later expanded to include Artsakh’s wounded soldiers with urgent housing needs, regardless of which war or battle they were injured in. Since then, 3 soldiers of the 90s Liberation War have benefited from the project. The geography of the initiative was also broadened during the past 2 years, ranging from large towns like Stepanakert and Hadrut to small, remote villages in Artsakh’s borderlands.

All 10 soldiers so far included in the initiative faced socio-economic struggles and lived in deplorable housing conditions that were detrimental to the health and well-being of their families. Moreover, due to their battle injures, they were unable to renovate their current homes or work to purchase new ones.

Like many of these soldiers, Mher’s family endured such conditions for many years after his injury. Having a home they could call their own was a dream for this family throughout all those years.

Although the 2016 emergency has ended, the housing needs for Artsakh’s soldiers is ongoing. With many wounded soldiers requiring similar assistance, the Foundation will continue this work indefinitely.