The Naghash Ensemble: “The Sound of Ancient Armenia reinvented for the 21st Century” — Tigran Mansurian 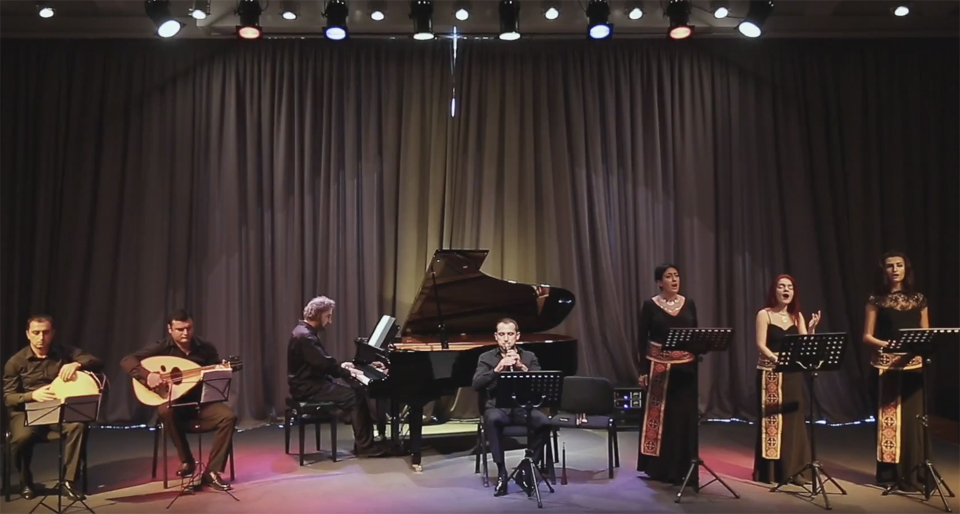 YEREVAN/NEW YORK — After five years of touring throughout Europe, The Naghash Ensemble of Armenia is returning to the recording studio to finish their “Songs of Exile” trilogy, a project that has been described as “a deeply moving mix of Armenian spiritual folk and new classical music” by Germany’s most prominent classical music radio station, BR Klassik.

Based in Yerevan, The Naghash Ensemble features three brilliant female vocalists and some of Armenia’s finest instrumentalists on duduk, oud, dhol and piano, playing new music by American-Armenian composer John Hodian. The music is based on texts by the medieval Armenian mystic poet and priest, Mkrtich Naghash, and is a profound meditation on man’s relationship to God from the perspective of a monk forced to live in exile for many years.

“The concept of living in exile is something that many Armenians can relate to and through our performances, we are able to share part of Armenia’s cultural heritage with European audiences many of whom have little idea of Armenia’s history,” says John Hodian.

Now The Naghash Ensemble has launched a fundraising campaign to complete their “Songs of Exile” trilogy. “All of our work is funded by our audience and it’s been gratifying to see people from all over the world coming together to support the new recording by donating to our Kickstarter.”

The new CD “Lamentations & Benedictions” will be the final volume of The Naghash Ensemble’s cycle “Songs of Exile” and features some of Mkrtich Naghash’s most haunting poems set to music with a broader emotional and musical range than ever before. The CD will be accompanied by a beautiful 65-page book in English, German, French and Armenianwith extensive information on the group’s history, Naghash the poet, and translations of the poems.

Kickstarter is the largest fundraising platform in the world and the new recording will be an important step as the ensemble continues to gather ore international attention. A video of The Naghash Ensemble’s campaign can be found at http://kck.st/2wfAT2V

The Naghash Ensemble upcoming tour will take them to 11 European countries and in October 2020, they will be coming to the USA and Canada for the first time.

A preview of the ensemble performing one of the new pieces live in Belgium can be found here: https://youtu.be/6flRUS1mH2o

For more information about The Naghash Ensemble, please visit: www.naghashensemble.com