With all the difficulties, people of Artsakh are ready to stay and fight, Ruben Vardanyan says on BBC’s HARDtalk 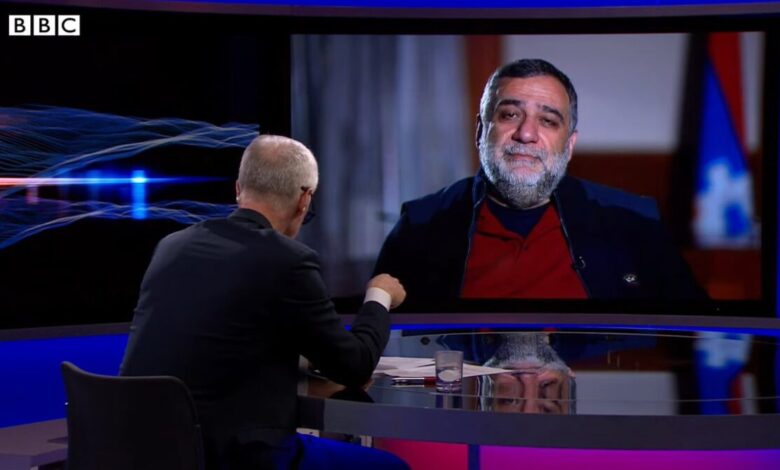 (Armradio) – With all the difficulties we are facing, I believe the people of Artsakh will stay strong and stay committed to our homeland, Artsakh’s Minister of State Ruben Vardanyan said on BBC’s HARDtalk.

“It’s very important for the world to know what’s happening in a locked out territory, where 120 thousand people living in their own homeland for thousands of years and fighting for their independence during the last 35 years, have been blocked by Azerbaijani “eco-activists” since December 12. With support from the Azerbaijani state, they now control the road, and we don’t get anything except from the Red Cross and Russian peacekeepers. We have no gas, limited electricity; no food and medicine, no gasoline can enter our territory without the Red Cross and the Russian peacekeepers,” Vardanyan said in an interview with Hardtalk‘s Stephen Sackur.

“From 1988 Armenians of Artsakh have been saying “we will not be part of Azerbaijan.” And they fight for their freedom. Today we are posing a very clear questions to the world, saying “do we have a right to self-determination, especially in a state that violated all the human rights for its own people?” he added.

Vardanyan stressed that one family has been controlling Azerbaijan for 44 years during the 104 years of existence of the country.

“There are no rights for the Azerbaijani people, not even talking about Armenians. How do you see the possibility for an ethnic minority to get any rights or any defense? We don’t see any chance,” the State Minister said.

He reminded that children returning to Artsakh six weeks after being stranded in Armenia, were stopped, checked and psychologically attacked by Azerbaijanis.

Vardanyans said the Republic of Artsakh is ready for negotiations with an understanding from the Azerbaijani side that “this will be a negotiation between two sides.”

“We have been saying from very first day that we are living side-by-side, but we will be a separate territory, a separate state with separate rules of law, because we are a democratic country. We have had four presidents elected. We do not see ourselves as part of Azerbaijan, but we respect the fact that we live in the same region and we need to find a solution that will be acceptable for both sides,” he said.

“Despite all the speculation from Azerbaijan, the story is not over. We believe we have the right for our independence, the right to live in our homeland. People living in Artsakh understand the difficulties we are facing today, but are ready to stay and defend our own home. There is an understanding that we are small, but we are very big,” he added.

He dismissed the reports about any discrepancies between the Republic of Artsakh and Armenia. “The number one person in the republic – the President – always keeps in contact with the Prime Minister [Nikol Pashinyan]. That’s why I don’t know what you are talking about. This is a speculation I don’t think makes sense to reflect on during out conversation,” Vardanyan said.