What’s at Stake in Denying the Consequences of Genocide 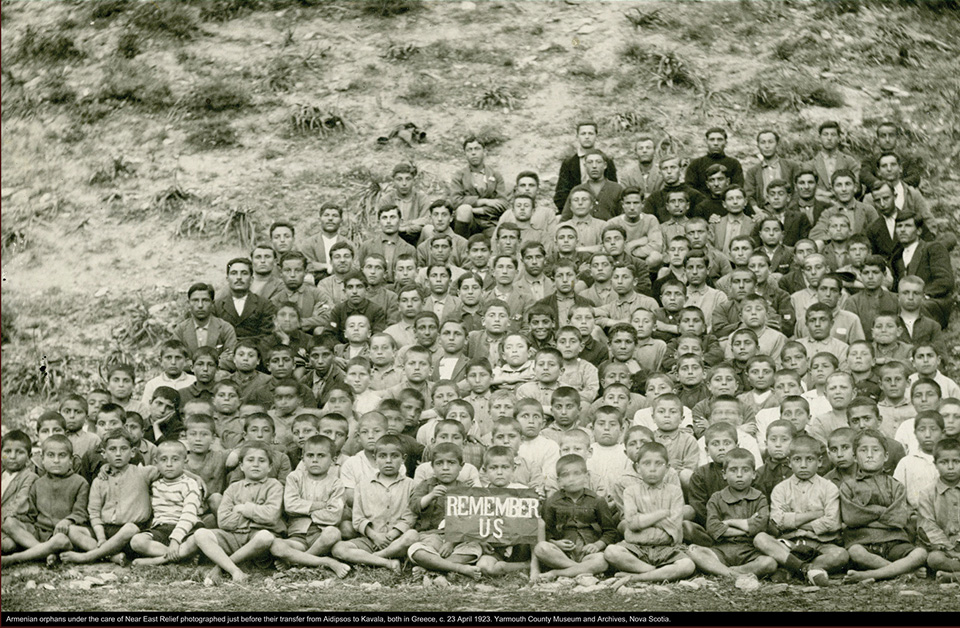 “Denial by Turkey and its agents is no longer just another side of a coin or an opinion, but rather hate speech directed to debilitate the victimized group further.”

When I first started researching Sara Corning, the namesake of the organization founded in 2012, I came across a photograph taken on April 23, 1923, kept in the Yarmouth County Museum and Archives in Nova Scotia. The picture was of a group of boys orphaned during the Armenian genocide who had been under the care of Sara Corning in Greece.

Corning saved thousands of orphaned Greek and Armenian survivors of the genocide from Smyrna as Kemal Ataturk’s forces set the Greek coastal city ablaze. The youngest of the boys held a sign that read, “Remember Us.” In hindsight, this was a warning more than a request. A cautionary phrase of the price humanity will pay for its ostrichism. More than a century later, with almost all Armenian genocide survivors having passed and in the face of Turkey’s ongoing denial of the genocide, the photograph becomes a haunting reminder of the challenges and importance of collective commemoration and remembrance.

These challenges highlight the importance of genocide recognition by the international community, the most recent of which came from the United States through President Joe Biden’s April 24 message commemorating the Armenian genocide.

The world, unfortunately, forgot the Armenians and, in doing so, inspired generations of aspiring genocidaires like Hitler, who, along with the Nazi party, revered the successes of the Armenian genocide and Ataturk’s ability to help Turkey to evade justice.

As German historian Stephan Ihrig presented in his book, “Ataturk in the Nazi Imagination,” on September 1, 1923, a short five months after the photograph mentioned above was taken, the Nazi newspaper Heimatland published a feature project on Kemal Ataturk, the founder of modern-day Turkey, by Hans Tröbst, the sole German in Ataturk’s forces. This influential feature series, composed of six articles, was meant to use Ataturk’s Turkey as the archetypical solution to Germany’s post-war struggles.

In his summary of Turkish Lessons, Tröbst stresses the need for “national purification” and writes, “In this respect, the circumstances were the same in Asia Minor as here. They had to be eradicated and rendered harmless; otherwise, the whole struggle for freedom would have been put in jeopardy. The bloodsuckers and parasites on the Turkish national body were Greeks and Armenians.” Hitler, inspired by this series, wrote to Tröbst, “What you have witnessed in Turkey is what we will have to do in the future as well in order to liberate ourselves.”

Sixteen years later, before invading Poland, Hitler emboldened his killing units to massacre without mercy with his infamous words, “Who, after all, speaks today of the annihilation of the Armenians?” The Holocaust became one of the prime examples of the byproducts of impunity. As Canadian Human Rights Lawyer David Matas has said, referring to the Armenian genocide and Jewish Holocaust, “Nothing emboldens a criminal so much as the knowledge he can get away with a crime.”

It is not a coincidence that denial of genocide has been listed as the last stage of genocide by the former president of the International Association of Genocide Scholars, Dr. Gregory Stanton, in his 10 Stages of Genocide. Despite affirmation by genocide scholars internationally, the Turkish government has used its state resources to deny the Armenian genocide for more than a century. It obsessively pursues and enforces its denialist policies both at home and abroad, while victimizing descendants of survivors through the trauma of genocide denial and its assault against memory.

Denial by Turkey and its agents is no longer just another side of a coin or an opinion, but rather hate speech directed to debilitate the victimized group further.

April 24, 2021, the 106th anniversary of the Armenian genocide, was additionally painful. Impunity for Turkey’s past crimes has emboldened new torchbearers in Turkey and Azerbaijan. As their predecessors did a century ago, they continue to pursue the ideology of Turkish expansionism, better known as pan-Turanism, at the expense, once again, of Armenians and Armenia. Turkey and Azerbaijan’s decades of hate campaigns and active denial of the Armenian Genocide have become the catalyst for further destruction in 2020, this time the 44-day war it waged against the Armenians of the Republic of Artsakh starting on Sept. 27, 2020. The war led to further loss of lives, horrific war crimes, displacement and the occupation and destruction of more Armenian homes and heritage sites. Once again, as was the case 106 years ago, crimes have been committed under the watchful eye of an indifferent international community, unwilling of timely intervention.

Hundreds of civilians and prisoners of war continue to be held hostage in Azerbaijan. News from those who have returned from captivity speak of the rampant use of brutality, dehumanization and torture. As Armenians continued to mourn its losses and prepared to commemorate the Armenian genocide, on April 13, Azerbaijan’s Aliyev, in one of his most creative displays of Armenophobia, opened an outdoor “Trophy Park” as a place to educate visitors about his recent conquest and destruction of Armenians. The park displays the helmets of Armenian soldiers killed a short five months ago as prizes of war. Most troubling is the display of wax mannequins of Armenian soldiers made by employing racist stereotypes.

Despite a century of destruction, Armenia remains an obstacle to Erdogan and Aliyev’s destructive pan-Turanian dream. Both leaders have claimed Armenia as theirs publicly. Aliyev has called for the forceful occupation of Armenia’s internationally recognized territories, including its capital Yerevan consistently throughout and after its 44-day destruction.

As the wealth and strategic borders amassed by the Turkish Republic through genocide continues to be employed to destroy Armenia and Armenians, justice for the Armenian genocide remains as the only means to secure the long-term viability of Armenia, establish safety, and security for Armenians, and the only way to establish a genuine peace in the region.

Sadly, Hannah Arendt’s statement from her report on Eichmann’s trial in Jerusalem rings true: “No punishment has ever possessed enough power of deterrence to prevent the commission of crimes. On the contrary, whatever the punishment, once a specific crime has appeared for the first time, its reappearance is more likely than its initial emergence could ever have been.”

If punishment does not deter, then imagine the freedoms and reassurances we grant future genocidaires. Our failure to heed to the “Remember Us” of the Armenian orphans and our failure to adequately address, punish or prevent genocides inclusive of and subsequent to that of the Armenians have led to the victimization of others, such as the Uyghurs and Rohingya today.