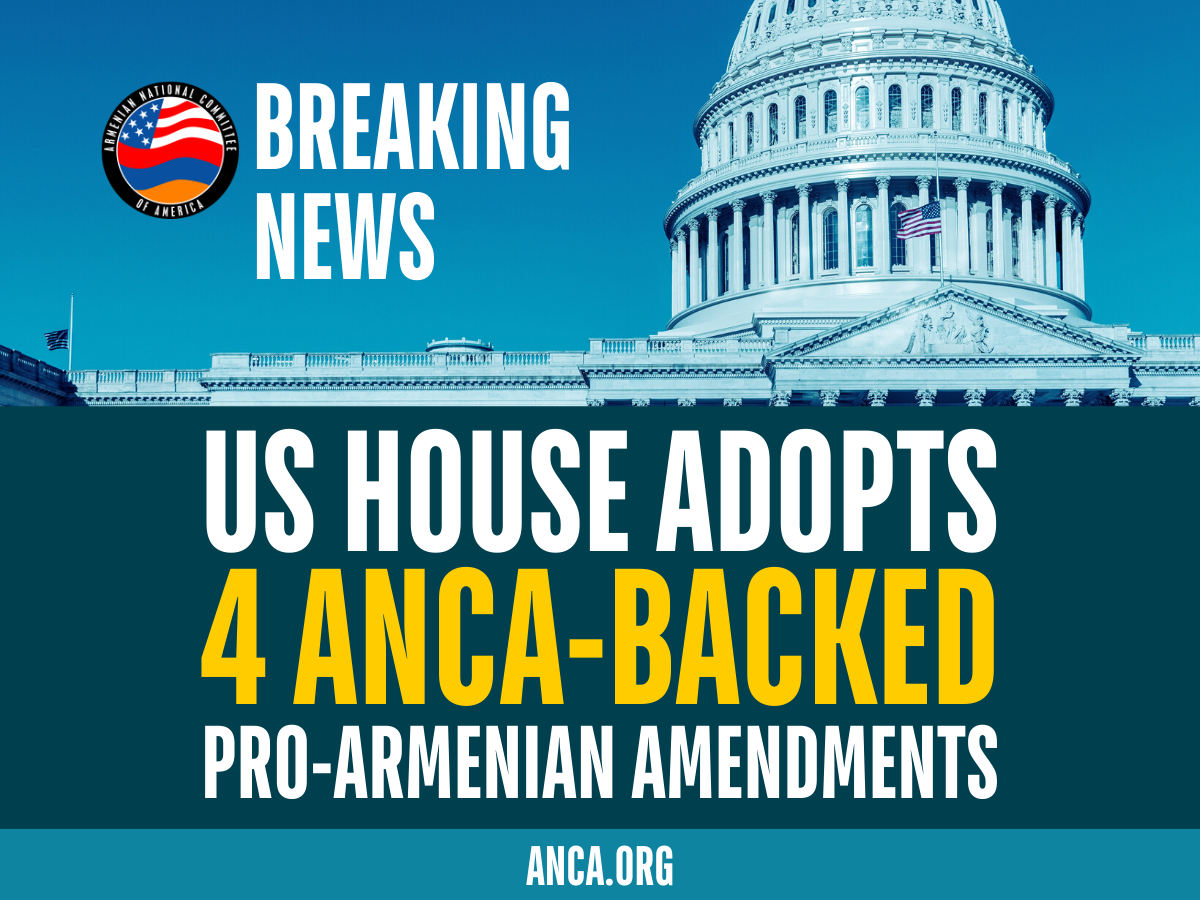 WASHINGTON, DC – Powerful Congressional, community and coalition advocacy contributed to today’s US House passage of four Armenian National Committee of America (ANCA)-backed amendments demanding Baku’s release of Armenian prisoners of war (POWs), calling for investigations into Azerbaijani war crimes, reporting on the impact of US military aid to Azerbaijan and placing restrictions on the sale of F-16s to Turkey.

Three of the measures were adopted as part of larger groupings, or blocs, of amendments to the National Defense Authorization Act (NDAA – H.R.7900). The fourth, placing restrictions on F-16 sales to Turkey, passed by a vote of 244 to 179, withstanding powerful opposition from pro-Erdogan lobbyists during final days of consideration of the measure. The US House is expected to pass the underlying NDAA measures later Thursday evening.

“The ANCA thanks the Congressional leaders, coalition partners, and tens of thousands of ANCA activists from across the United States who made today’s victories possible,” said ANCA chairman Raffi Hamparian. “Working together – against deeply entrenched and powerfully vested interests – we are helping to protect Artsakh, promote Armenia, hold Azerbaijan accountable and stop the flow of US arms to Turkey.” The four pro-Artsakh/Armenia amendments adopted by the U.S. House are provided below:

Amendment #121: Spearheaded by Representatives Tony Cardenas (D-CA), Brad Sherman (D-CA), and Adam Schiff (D-CA), the amendment calls for a report by the State Department and Defense Department that would detail the use of U.S. parts in Turkish drones used by Azerbaijan against Armenia and Artsakh; Azerbaijan’s use of white phosphorous, cluster bombs and other prohibited munitions deployed against Artsakh; Turkey’s and Azerbaijan’s recruitment of foreign terrorist fighters during the 2020 Artsakh war.

The amendment was adopted by voice vote as part of “en bloc 1” – a larger grouping of amendments to (H.R.7900).

Amendment #611: Introduced by Rep. Adam Schiff (D-CA), the amendment expresses the sense of Congress that the government of Azerbaijan should immediately return all Armenian prisoners of war and captured civilians.   The amendment was adopted by voice vote as part of “en bloc 5” – a larger grouping of amendments to H.R.7900.

2) report on whether U.S. security assistance to the government of Azerbaijan undermines efforts toward a peaceful settlement between Armenia and Azerbaijan

3) provide an assessment of Azerbaijan’s use of offensive force against Armenia or violations of Armenian sovereign territory from November 11, 2020, to the date of the enactment of this Act.

In powerful remarks on the House floor, Rep. Frank Pallone condemned the annual U.S. presidential waiver of Section 907 restrictions on U.S. aid to Azerbaijan and urged passage of the amendment.  “We don’t believe that there is any justification for waiving [Section 907 of the FREEDOM Support Act]  because of the constant threat that Azerbaijan poses not only to Nagorno Karabakh but also to Armenia itself, that continues ever since [the 2020] war.”

Amendment #399: Led by Representatives Frank Pallone, Chris Pappas (D-NH), and Gus Bilirakis (R-FL), the amendment places conditions upon the sale or transfer of F-16s or F-16 modernization kits to Turkey.

Rep. Pallone rallied Congressional support for the amendment during the floor debate prior to the vote. “The sale of American advanced fighter jets to Turkey will not incentivize Erdogan to suddenly transform into a good ally. More likely these weapons will lead to further death and destruction in the region. For far too long the United States has allowed Erdogan to dictate his terms and hide behind Turkey’s status as a NATO ally. He has avoided facing real-life consequences greater than a slap on the wrist for his flagrant violations of international law at home and abroad and it’s time we finally say enough is enough. This amendment will do just that and help take the leveraging power out of Erdogan’s dangerous autocratic hands,” argued Pallone.

In addition to the ANCA, the following US civil society organizations are on the record opposing the sale F-16s to Turkey: American Friends of Kurdistan, American Jewish Committee, Hellenic American Leadership Council, In Defense of Christians, Middle East Forum and PSEKA – International Coordinating Committee Justice for Cyprus.

Over the past weeks, in addition to nationwide grassroots call and Twitter campaigns, the ANCA Leo Sarkisian, Maral Melkonian Avetisyan and Hovig Apo Saghdejian Capital Gateway Program summer interns and fellows joined ANCA Government Affairs director Tereza Yerimyan in advocating for these pro-Artsakh/Armenia priorities in legislative briefings for over 100 Congressional offices, in addition to a broader office-by-office outreach campaign.

The ANCA will continue to work with Senate Armed Services Committee members include the adoption of these measures in their version of the FY 2023 NDAA, set to be discussed in the fall.