Uruguay sees no alternative to peaceful solution of NK conflict 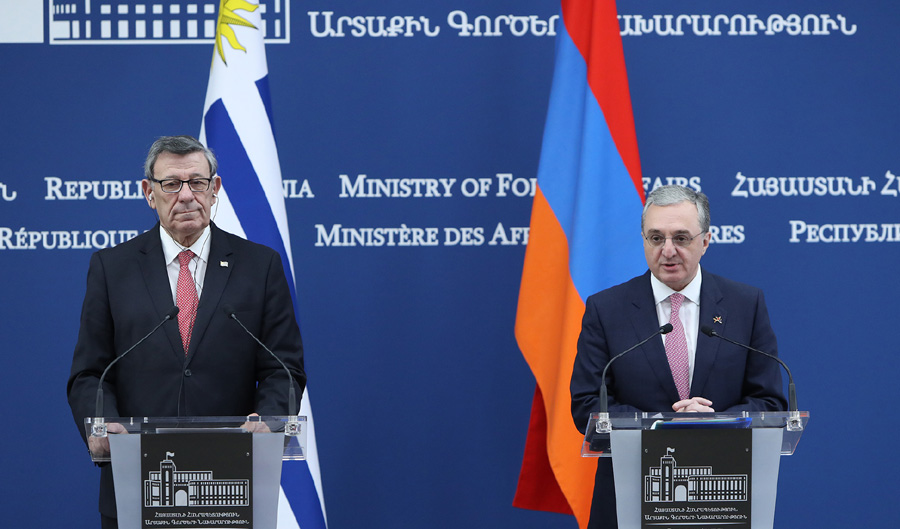 The foreign ministers delivered a joint press conference today after holding a meeting in Yerevan.

“I had the opportunity to present in detail Armenia’s approaches, stance and logic behind the stance in the peaceful resolution process of the Nagorno Karabakh conflict. I reiterated that the security of the Nagorno Karabakh population, our countrymen of Nagorno Karabakh has been and remains a priority issue in our approaches, and the issue of the status proceeding from this remains a priority issue for us. I noted that the creation of an appropriate environment for advancing the peace process has been and remains a most important issue. I detailed what relates to the issue of what it means in our approach that there is no alternative for the peaceful solution. And I am very grateful to my colleague for the perceptions which he shared with me over this issue,” Mnatsakanyan said.

Uruguay’s FM said that his country is a peace-loving one and supports the ongoing negotiations which are taking place within the framework of the OSCE Minsk Group.

“Uruguay is a peace-loving country, and the minister very clearly and simply explained the Nagorno Karabakh situation. Our country supports the negotiations which are taking place within the framework of the Minsk Group in accordance with the 1995 mandate, in order to achieve a negotiated solution based also on the principles included in the UN founding document. As my friend minister said – there is no alternative to the peaceful solution of this conflict,” Rodolfo Nin Novoa said.