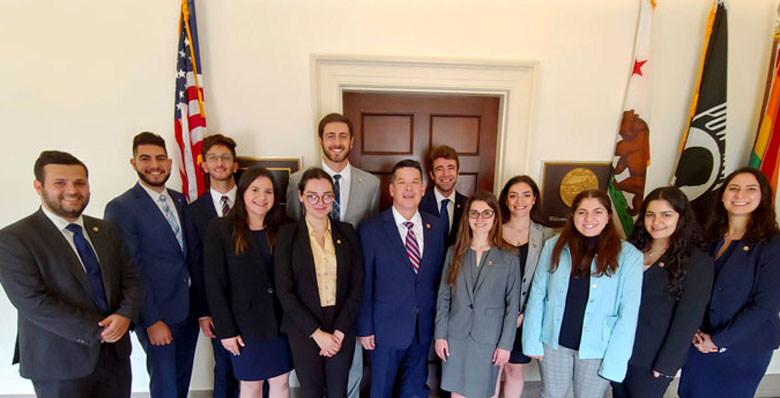 Securing and sustaining direct U.S. support for Artsakh has been a key ANCA policy priority for more than two decades, since this aid program was first launched, with ANCA backing and the leadership of Rep. Brad Sherman (D-CA), in the Fiscal Year 1998 foreign aid bill. To review the full range of ANCA policy objectives, visit www.anca.org/anca360.

“We want to thank Congressman Cox for his leadership in ensuring continued U.S. aid for Artsakh. This assistance represents both a principled American investment in peace and also practical support for the safety and well-being of families and farmers across this independent republic,” said ANCA Chairman Raffi Hamparian. “From his first day in Congress, TJ Cox has been a champion for his constituents of Armenian heritage, fighting for aid to Artsakh and the full range of policy priorities of special concern to the vibrant Armenian American community in California’s Central Valley.”

Rep. Cox shared the importance of the passage of his amendment in a video message to the ANCA, available here:

During remarks on the House floor last week, Rep. Cox noted “Karabakh has one of the highest civilian casualty rates from land mines and unsolicited remnants of war. According to The HALO Trust, there have been nearly 400 civilian casualties from mines and unexploded ordnance in Karabakh for the last few decades and a quarter of those landmine victims have been children. In 2013, a needs assessment estimated that The HALO Trust interventions have benefited over 80% of the region’s population. Mr. Speaker, families and children shouldn’t have to live in fear of dying due to a landmine accident.”  Video of Rep. Cox’s floor statement is available on the ANCA YouTube Channel here:

The Cox Amendment on Artsakh aid, which was supported by Congressional Armenian Caucus Co-Chairs Frank Pallone (D-NJ) and Jackie Speier (D-CA) and Vice-Chair Adam Schiff (D-CA), calls for a $1.5 million allocation for FY2020.  It was adopted as part of an “en bloc” group of foreign aid related amendments to H.R.2740 by a vote of 231 to 187. The Cox Amendment passed over the opposition of the Ranking Republican on the House Appropriations Committee, Hal Rogers (R-KY), who opposed several amendments in the en bloc measure, including the Cox amendment.

Thousands of ANCA Rapid Responders and Armenian Americans across the U.S. reached out to their U.S. Representatives in support of the Cox Amendment for Artsakh through the ANCA’s March to Justice portal.  In the days leading up to the vote, ANCA Leo Sarkisian Summer Interns amplified the nationwide constituent advocacy, visiting with every U.S. House office in support of the measure and sharing the incredible progress of The HALO Trust’s de-mining efforts and the good works of the Lady Cox Rehabilitation Center in Stepanakert.

In March, the ANCA worked closely with Congressional Armenian Caucus leadership in support of a Congressional letter, supported by over 35 Members of Congress, to the House Appropriations Committee leadership outlining a range of U.S. foreign assistance priorities, including aid to the Republic of Artsakh.

Separately, during testimony before the House Appropriations Subcommittee on Foreign Operations, the ANCA stressed “American assistance has met pressing humanitarian needs, including clean water for families and mine-clearance across Nagorno Karabakh’s farmlands, towns, and villages. The HALO Trust, with the support of this Subcommittee, is close to declaring Nagorno Karabakh mine-free, but needs continued funds to complete its life-saving work. In addition to de-mining, we urge this panel to support the operations of Nagorno Karabakh-based regional rehabilitation centers, like the Lady Cox Rehabilitation Center in Stepanakert, which serve children, adults, and seniors with physical and mental disabilities.”

Continued U.S. assistance to the Republic of Artsakh is part of the broader ANCA 360 legislative agenda which seeks to generate U.S. support — in policy, practice, and  principle— for Artsakh’s independence and security, support the OSCE Minsk Group platform, challenge Azerbaijani aggression by promoting accountability for attacks along the line of contact, and foster broader, pro-peace dialogue between the U.S. and Artsakh.