Turkish Generals Led War on Artsakh: This was a Turkish, not Azeri, Victory 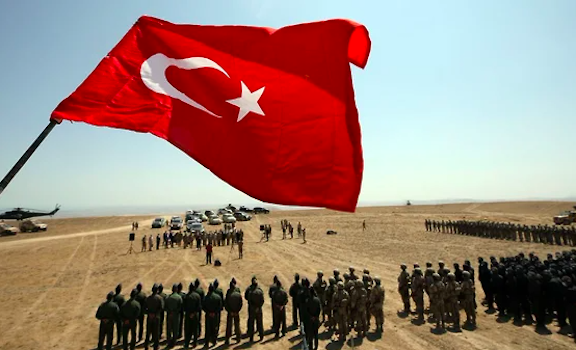 Exiled Turkish journalist Cevheri Guven disclosed in a video report the names and activities of three Turkish Generals who had a decisive role in leading Azerbaijan’s war on Artsakh, starting on Sept. 27 2020. It is already known that modern drones and missiles purchased by Azerbaijan from Israel, Turkey and Russia had a devastating effect on Armenia and Artsakh. It is also known that 200 Turkish military advisors and several thousand Syrian mercenaries participated in the war on behalf of Azerbaijan. However, this is the first time that a detailed report is made public about the presence of these Turkish Generals in Azerbaijan during the war.

One of the Turkish military leaders is Lieutenant General Sheref Ongay. The second is Major General Bahtiyar Ersay, and the third is Major General Goksel Kahya. The presence of these Turkish Generals in Baku is linked to the dismissal before the Artsakh War of Colonel General Nejmeddin Sadikov, Azerbaijan’s First Deputy Minister of Defense and Chief of General Staff who had been at his post for 27 years. He was accused of treason and cooperation with the Russian military intelligence, according to Russian and dissident Azeri sources. Sadikov was reportedly arrested after his dismissal which was denied by Azerbaijan’s Ministry of Defense. However, he has not been seen in public since his dismissal. Sadikov was reportedly born in Derbent, Dagestan, and is of Lezgin origin. He has a poor knowledge of the Azerbaijani language. It is also alleged that his cousin is serving in the Russian Army in Gumri, Armenia.

Sadikov was educated in Russia. It is important to note that a large number of Azeri soldiers were sent to Turkey to get their military education. Sadikov did not allow those returning from Turkey to serve in critical military positions. He was opposed to Turkish dominance in the leadership of the Azerbaijan’s Armed Forces. As a result, Turkey asked for Sadikov’s dismissal after which those trained in Turkey were given leading posts.

Returning to the three Turkish Generals, Sheref Ongay is the Commander of the Turkish Third Army, deployed in Erzingan. He was in control of the Artsakh War. Ongay graduated from the military academy in Ankara in 1982 and served in various units of the ground forces. In 2014, he was appointed Commander of the 9th Army Corps. He was for a while the head of the infantry school in Tuzla.

The second Turkish military leader in Azerbaijan, Major General Bahtiyar Ersay, was earlier jailed for being involved in a scandal (Operation Sledgehammer). However, he was pardoned and released, possibly because he made a plea bargain with the authorities, disclosing the names of the other participants in the conspiracy. He was subsequently promoted to the rank of Brigadier General becoming in charge of the 2nd Commando Brigade which fought with great brutality against the PKK (Kurdistan Workers’ Party) in Eastern Turkey. He is now the Chief of Operations at the Command of Turkish Land Forces. He stayed in Baku throughout the Artsakh War and personally managed the operations. Before the start of the war, two satellite communication centers were built in Baku and at the military airport of Gabala to contact the soldiers on the ground and the headquarters in Turkey. Both centers were managed exclusively by the Turkish Army. The Azerbaijani military was ordered to obey all commands of the Turkish superiors and not argue with or contradict them. Ersay was in charge of the Syrian mercenaries who had earlier fought in Syria and Libya on behalf of Turkey. Furthermore, Ersay managed the highly technical military equipment provided by Turkey to Azerbaijan.

The third Turkish military man is Major General Goksel Kahya who was in Azerbaijan since July of this year. He is close to the Defense Minister of Turkey. Previously, he was Deputy Undersecretary in the Ministry of Defense. While taking part in the war in Libya on behalf of Turkey, he was captured by the opposition Libyan forces and then released. Kahya was in charge of the Turkish drones operating in Libya which gave him valuable experience in managing the drone war against Artsakh.

Since the end of the Artsakh War, the Azeri public has expressed its unhappiness that Russian peacekeepers are located on the territory of Karabakh. Some analysts have described the Russian presence in Azerbaijan, Armenia and Georgia as a defeat for Turkey and the United States, and a victory for Russia, having located its forces “under the nose of NATO member Turkey.” As Russian online newspaper Vzglyad concluded: Artsakh War’s “plan was Turkish, the Generals were Turkish, and the drones were made in Turkey…. Baku can celebrate victory, but in terms of command and control, Turkish Generals can celebrate victory.”

Retired Lieutenant Colonel of the Azerbaijani Army Oleg Guliyev, now living in Moscow, told the Vzglyad newspaper: “Azerbaijan must fully reclaim Karabakh. This is correct and fair. But we must reclaim Karabakh ourselves. If we reclaim it on a Turkish leash, then we will reclaim only Karabakh, and we will lose the rest of our country.”