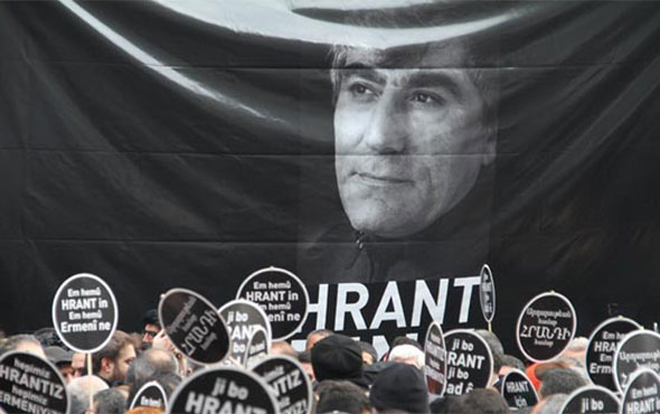 (Ahval) – A Turkish court on Wednesday handed prison sentences for nine suspects in relation to the assassination of Turkish-Armenian journalist Hrant Dink in 2007, Agos newspaper reported.

Dink’s assassination trial is ongoing, while the verdict for nine suspects were brought forward as they were subject to statute of limitations.

Erhan Tuncel, a former informant and the suspected instigator of the Dink murder, was handed down a sentence of 99 years six months in prison for taking part in Dinks’s association, being a member of an armed group, and his part in a bomb blast at a restaurant in the Black Sea coastal province of Trabzon. Tuncel was arrested at court.

Yasin Hayal, who previously received a life sentence for life for his part in the assassination, received seven years six months in prison over forming and leading an armed group.

The court sentenced assassin Ogün Samast, a native of Trabzon who was 16-years-old at the time, to two years six months in prison for membership to an armed group. Samast has also a 22 years 10 months sentence for Dink’s murder.

Four other suspects were handed down less than two year sentences for their role in the murder, while two defendants, including Hayal’s brother Osman Hayal, were acquitted.

Dink, the founder of Turkey’s Armenian bi-weekly Agos newspaper, was killed in Istanbul in front of his office in attack that made international headlines.

The slain journalist was outspoken on the Armenian genocide and prosecuted three times for violating Article 301 of the Turkish penal code, which makes it a crime to insult Turkishness, the Turkish nation or Turkish institutions.

Dink’s murder quickly came to symbolise the rising wave of nationalism in Turkish society, a war against freedom of expression and the complacency of Turkey’s intellectuals.