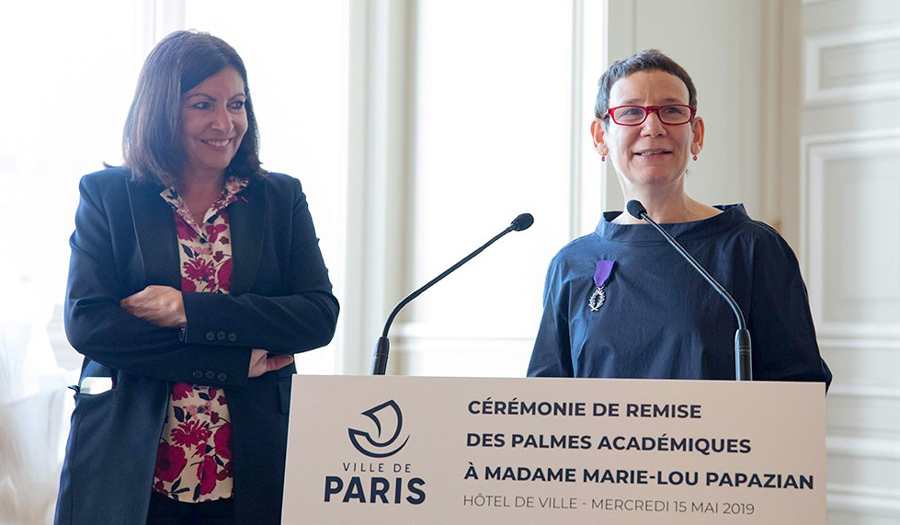 On May 15th, Marie Lou Papazian, CEO of the TUMO Center for Creative Technologies, was awarded the title of Chevalier, “knight,” by the Ordre des Palmes Académiques, an order bestowed by the French Republic on distinguished academic and cultural figures for their contributions to science and education. Papazian was nominated for the honor by Gilles Pécout, Rector of the Academy of Paris and Ile de France, and fellow Ordre des Palmes Académiques honoree.

Anne Hidalgo, Mayor of Paris, presented the medal to Papazian at a ceremony at Paris City Hall. Guests included Hasmik Tolmajyan, Ambassador of Armenia to France, and other members of the French-Armenian community.

“Without you, Marie Lou, TUMO would not exist in Armenia or France. If this medal was created for anyone, it’s you — a true citizen of the world. TUMO symbolizes freedom and is one of the best schools in the world. Thanks to your efforts, and those of Claude Farge and the Forum des Images, it will continue to inspire us all,” said Anne Hidalgo in her remarks during the ceremony.

“This medal represents something extremely rare and valuable — a genuine acknowledgment of shared values,” said Marie Lou Papazian, in her acceptance speech. “I will wear it with pride and the hope of inspiring more courage, tenacity and resourcefulness.”

TUMO is honored to have its CEO and program recognized by an institution as esteemed as the Ordre des Palmes Académiques. This week, the program will also be presented at Viva Technology 2019 in Paris, the world’s rendezvous for startups and leaders to celebrate innovation. Papazian will deliver a talk entitled “Inventing the Future of Learning.”

The Ordre des Palmes Académiques (Order of Academic Palms) is an order of knighthood of France for academics and cultural and educational figures. The early Palmes académiques was instituted on 17 March 1808 and was only awarded to teachers or professors. In 1850 the decoration was divided into two known classes:

In 1866, the scope of the award was widened to include major contributions to French national education and culture made by anyone, including foreigners.

The TUMO learning program began in Armenia where over 14,000 students now regularly attend centers across the country. Now TUMO is expanding on a global scale, into Paris, Moscow, Beirut and Tirana, along with other cities to be announced next year.​