Tufenkian Foundation Opened 5 Houses and a Community Center in Artsakh. 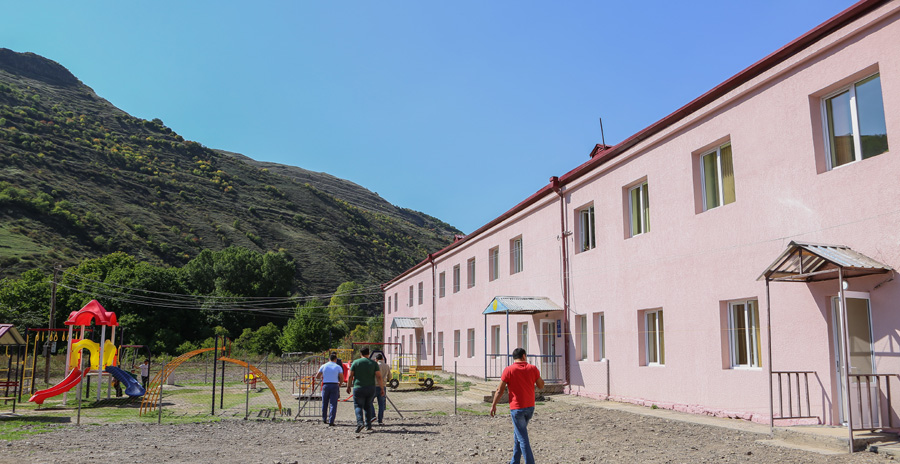 October 4, 2019. ARTSAKH. Five families, including a Syrian Armenian family who had fled to Armenia because of the war in Syria, received houses from the Tufenkian Foundation in the liberated territories of Kashatagh region, Artsakh. The Foundation also opened a newly renovated and refurbished community center in Moshatagh village, which will serve as a cultural and social hub for Moshatagh and surrounding villages. “Having a center like this plays a big role in the evolving of a larger and stronger community. The need was there as the population had no place to gather, organize events and celebrations. We thank the Tufenkian Foundation and the donors for this great initiative”, said the mayor of Moshatagh, Sirak Soghomonyan.

One of the houses, located in the town of Kovsakan, was given for Lusin Garahbed’s family of five, who had come to Armenia from Qamishly, Syria, seeking new hope and a better life in the motherland. “Housing for Syrian-Armenians remains a priority option in the scope of the Foundation’s resettlement program. We have been supporting both re-settlers from abroad and different parts of Armenia, but we also understand that those who have fled war and conflicts, those who have been uprooted from their homes, such as the Syrian Armenians, or the displaced Armenians from the Artsakh liberation war in the nineties, need special attention”, said Husik Sargsyan, Tufenkian Foundation’s Artsakh Country Director.

The other four houses, located in Herik, Hak, Moshatagh villages in the north, and Kovsakan town in the south of Kashatagh district, were given to families who had come from different parts of Armenia. Some of them are farmers or beekeepers, while one couple had moved from Armenia to work as teachers in the local school. “The resettlement of liberated Kashatagh is one of our major programs in Artsakh, and the key factor of succeeding here is good housing, schooling, and economic opportunities. The practice and numbers show that the liberated areas have a good potential for development; however, some communities still need additional social investments and improvement of infrastructure. We try to be as effective as possible, targeting the areas where resettling can be a strategic accelerator for general development”, – said Raffi Doudaklian, Executive Director of the Tufenkian Foundation.

Founded in 1999 by entrepreneur James Tufenkian, the Tufenkian Foundation has worked in Artsakh for over 15 years. Its on-the-ground efforts feature the promotion of resettlement, infrastructure, healthcare, and other development programs.