There was no country named Azerbaijan when Tigran the Great was negotiating with Pompeius, Pashinyan tells Aliyev 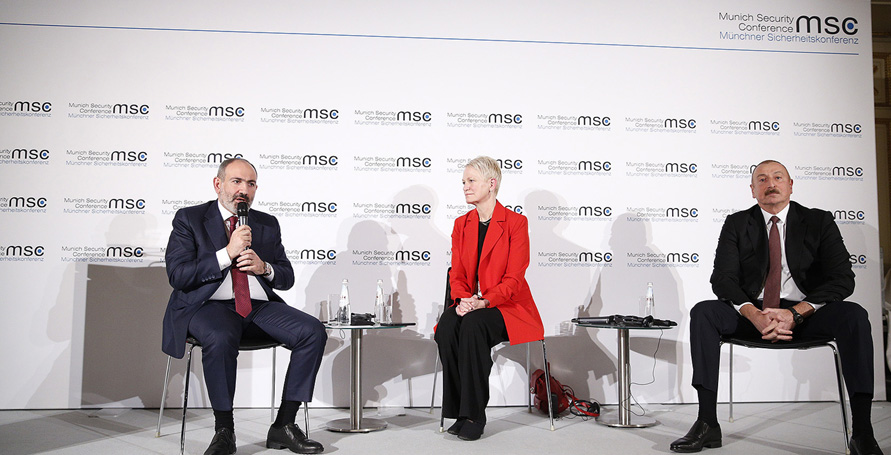 On February 15, Armenian Prime Minister Nikol Pashinyan and Azerbaijani President Ilham Aliyev participated in a panel discussion dedicated to Nagorno Karabakh on the sidelines of the Munich Security Conference.

In the times of Tigran the Great (95-55 BC) there were only two nations in the region – Armenians and Georgians, Armenian Prime Minister Nikol Pashinyan said at the panel discussion, Public Radio of Armenia reports.

The remarks came in response to Azerbaijani President Ilhal Aliyev’s claims that Azerbaijanis constituted  70% of Yerevan’s population at the turn of the 19th century.

“When Armenian King Tigran the Great was negotiating with Rоman general Pompeius, there was no country named Azerbaijan,” he stated.

Speaking about the Karabakh conflict settlement, PM Pashinyan said the negotiations should take place within the framework of the OSCE Minsk Group co-chairmanship.

“We are working very intensively and we are ready to put serious efforts to bring real difference and reach a real solution,” Pashinyan said.

🔴 LIVE from #MSC2020: Ilham Aliyev, President of 🇦🇿 Azerbaijan, and Nikol Pashinyan / Նիկոլ Փաշինյան, Prime Minister of 🇦🇲 Armenia, in conversation with Celeste A. Wallander, President and CEO of the U.S. Russia Foundation.

Nikol Pashinyan then referred to the minor revolutions he has made in the negotiation process.

“My perception is that it’s impossible to resolve this long-lasting conflict with one or two steps. We need micro-revolutions, transform them into mini-revolutions and then reach real breakthrough in negotiations,” the Armenian Prime Minister stated.

“One of the micro-revolutions was that in September 2018 I announced that any solution should be acceptable to the peoples of Armenia, Azerbaijan and Nagorno Karabakh. This was a micro-revolution, because I was the first Armenian leader to say the solution should be acceptable to the Azerbaijani people, as well,” Pashinyan stated.

The second micro-revolution, he said, was his call to social media users to stop threatening and insulting each other, and try to use the new technologies to understand each other better.

The Prime Minister then called out President Aliyev of Azerbaijan for the refusal talk to the people of Nagorno Karabakh.

He reminded that Nagorno Karabakh was recognized a party to the conflict and party to the negotiations by the OSCE. This happened twice on March 24, 1992 and during the OSCE summit in Budapest in 1994.