The Wailing and the Agony of the Armenian Children of April 24, 1915 still Echo amid Apathetic World 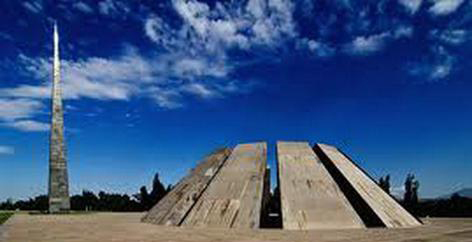 Today, April 24, the day Armenians worldwide commemorate the massive killing of over one and half million Armenians, a chapter in the long history of series of genocides of the Armenian people starting in the nineteenth century up to the twenty first century.

Today, all Armenians in Motherland Armenia and in the Diaspora are observing with great agony the world key actors remaining silent and indifferent over the continuing genocides targeting the Armenian nation including the recent aggression on Artsakh (Nagorno Karabakh), the accompanied atrocities and the war crimes. The recent killings that targeted unarmed Armenian civilians and military personnel, who are defending their United Homeland Armenia, perpetrated by Turkey and its ally Azerbaijan. Thus, key world actors repeat their indifference during the Armenian Genocide by today’s aggressor’s ancestors before, during and after 1915 which was followed with United Armenia getting amputated and its integral parts distributed to Turkey and Azerbaijan.

The world was silent when our ancestors were persecuted, raped, tortured, executed and deported by the Ottomans and our lands torn apart and usurped.

The world anew remains silent and watch the Armenian nation bleed to death while decorating the perpetrators with impunity and partnership.

When the so called advocates of humanity, of truth and of justice will shoulder their responsibility and recognize the Genocide of the Armenian Nation, a recognition which will prevent further genocides? A recognition to be combined with effective repentance for the practiced silence and indifference through supporting in deeds the revival of Free Independent United Armenia.

The recent tragic events and the accompanying genocide in centuries old Armenian Artsakh (Nagorno Karabakh) evidenced anew the Armenian Nation are on their own. They are empowered only by their faith and by their conviction and determination that only the sacrifices of the Armenian martyrs will revive United Armenia.

Yes, Armenian soldiers are bleeding, Armenian houses and sacred sites are getting demolished and desecrated. Armenian elderly and children are wailing in agony, Armenian mothers are mourning.

However, the injuries and the sufferings of Armenians Nation, the Nation of creativity and beauty, the Nation of life and for life, will be healed and the Armenian Nation will head for victory.

The cries and the pleas of our women getting raped still echo. The wailing of our children getting kidnapped and raped still reverberates.

Despite the appalling tragedies haunting the Armenian Nation, this year on April 24, the Armenian Nation will commemorate not only their sufferings, but they will equally commemorate the sufferings of all nations foremost that of the Assyrians and of the Arabs. The sufferings inflicted by the Ottomans whose descendants today sponsor and export extremists and mercenaries and continue to spread chaos and destruction in several Arab states, a tragic fate shared equally today by Armenian Artsakh (Nagorno Karabakh).

Monsignor Ghazi Al Khouri, whose Lebanese ancestors welcomed the survivors of the Armenian genocide while Lebanese together with other Arab elites from Jordan and Syria were executed by the Ottomans, stated

If the persecutors of genocides were allowed they would have renewed the past genocides.  The criminal tendencies of some human beings, countries and societies continue despite the arrival of the 21 century and despite the mushrooming of institutions that promote peace and advocate human rights and justice and the development of human beings keeping in mind in the Middle East the Ottoman perpetrators of the Armenian genocide committed all the genocides involving different nations in the Middle East before 1915.

For Armenians, the hope to gain global recognition and reparations for their past and ongoing genocide and lost properties ceased to be with the states whether Russia, whose ancestors usurped Armenian lands and presented it to Turkey and Azerbaijan, or USA, EU and the rest of the key world actors who continue prioritizing national interests and military dominance over human security and justice.

Today, the Armenian Nation commemorates anew the genocide while the wailing and the agony of the Armenian children of April 24, 1915 still echo amid apathetic world.

Madeleine M. R. Mezagopian is a published author and the holder of the Swedish Royal Medal of the North Star (Kungliga Nordstjärnemedaljen) and the Shield of the University of Jordan. She is a researcher, adviser and analyst and has served as the Executive Director at Al Arab Al Yawm (English) newspaper. Mezagopian is also a member of the General Assembly of Al-Hussein Society–Jordan Centre for Training and Inclusion.