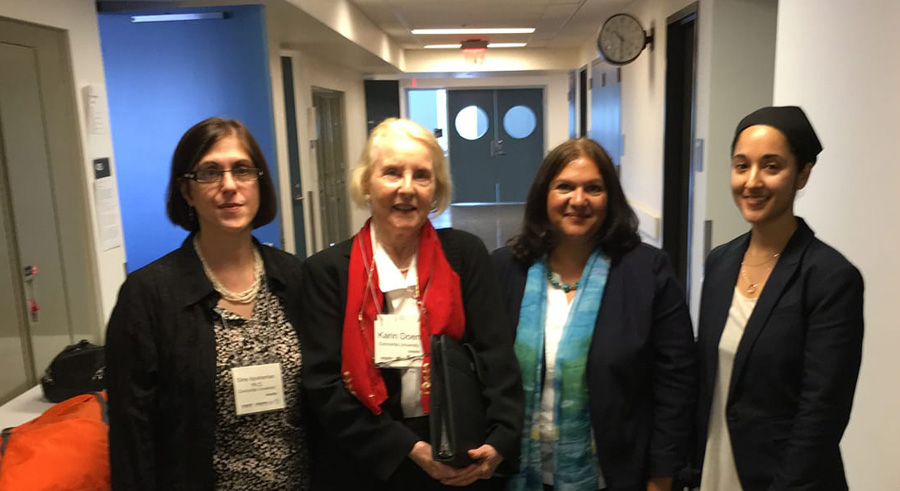 VANCOUVER—On June 6, 2019, in a panel session at the annual Congress of Humanities and Social Sciences of Canada entitled Genocide Art, the Armenian Genocide was discussed and presented through poetry. The session brought together papers that look at, from a feminist/socialist perspective, different aspects of art forms pertaining to the subject of genocidal murder. Such art can originate from survivors or their children, witnesses, members of a perpetrator nation, or individuals who wish to engage in the artistic representation of historical or systemic violence. Its function can be trauma release, commemoration, protest, resistance, interpretation or therapy and resilience. Before presenting, from a feminist and socialist perspective, Arpine Konyalian Grenier’s poetry as post genocide art, session co-organizer Dr. Sima Aprahamian, Research Associate at Simone de Beauvoir Institute, Concordia University, stressed that the Armenian Genocide, though perpetrated over a hundred years ago, is unfortunately a Genocide that is still continuing to take place in multiple ways including through its denial by the perpetrator state as well as through the destruction of the material and cultural remains of the Armenian people, and through racist violent attacks. Dr. Aprahamian’s main focus was on Arpine’s latest published book of poetry entitled “The Silent G”. Arpine is a second generation survivor of the Armenian Genocide. Like Arpine’s previous works, “The Silent G” is a difﬁ cult text to read, marked by dislocations. As she states, the collection may be considered a songbook of whats, whys and hows, experienced ontologically, culturally, socially and multi-nationally against a backdrop deemed Armenian — its prolific and full bodied history, all too subtle and volatile a song for legal restraint, as enchanted syllables lash the wind, unwilling to match desire to the attenuation of the passion it comes from. It is dedicated to Nora Rose, the poet’s granddaughter, and Grandma Gul — the grandmother she never had the

chance to meet (Gul means rose in Turkish). Her text begins with “Whereas one cannot read vulnerability and ﬂ awed citizenship, cannot name the deaf and oblique pain most think comes from depression or evil, whereas there is unfinished business as G stands for gravity, greed, the gothic and gnostic, gratitude and google, golem and gospel and ghouls, and genocide; and whereas it is silent, nuanced or muddled, here’s an ode to tears, an investment return to the investment return of clinging to the river, Euphrates, Araxes, other.”

In the other papers presented, Dr. Karin Doerr’s focus was on Holocaust art. Indira Prahst’s focus was on visual representations of the Sikh 1984 Genocide and Dr. Michiko Aramaki’s focus was on post WWII Japan and forced forgetting, racism, art work including comic books about Hiroshima and Nagasaki, the Emperor, and the War and how these have been re-conceptualized in the collective memories. The 88th Annual Congress of Humanities and Social Sciences was held on the traditional, ancestral and unceded territory of the Musqueam people at the University of British Columbia, June 1-7. The annual Congress brings

together over 70 scholarly associations and over 8000 researchers and is hosted by a different Canadian university each year. This year the theme was conversations and had a focus on Canada’s efforts for reconciliation with its indigenous peoples. Speakers included Canadian novelist, two-time Giller prize winner Esi Edugyan, who discussed issues of history, race, creativity, the nature of freedom, and voice; Director and CEO of the Canada Council for the Arts Simon Brault whose focus was on cultural citizenship, inclusiveness, equality and the price of change. There was a screening of the latest film of David Suzuki and Ian Mauro entitled Beyond Climate, and a discussion about the role of ﬁ lm in research, community engagement, and solution-making. The Society for Socialist Studies, one of the member associations of the Federation that organizes the Congress has been sponsoring research presentations on the Armenian Genocide for over two decades. This year its theme was circuits of capital and solidarity. It highlighted the struggles of working people, Indigenous peoples, racialized persons, those with disabilities, the poor, sexual and gender minorities for sustainable relations