The “Armenia Alliance” Electoral Platform and the Parliamentary Elections 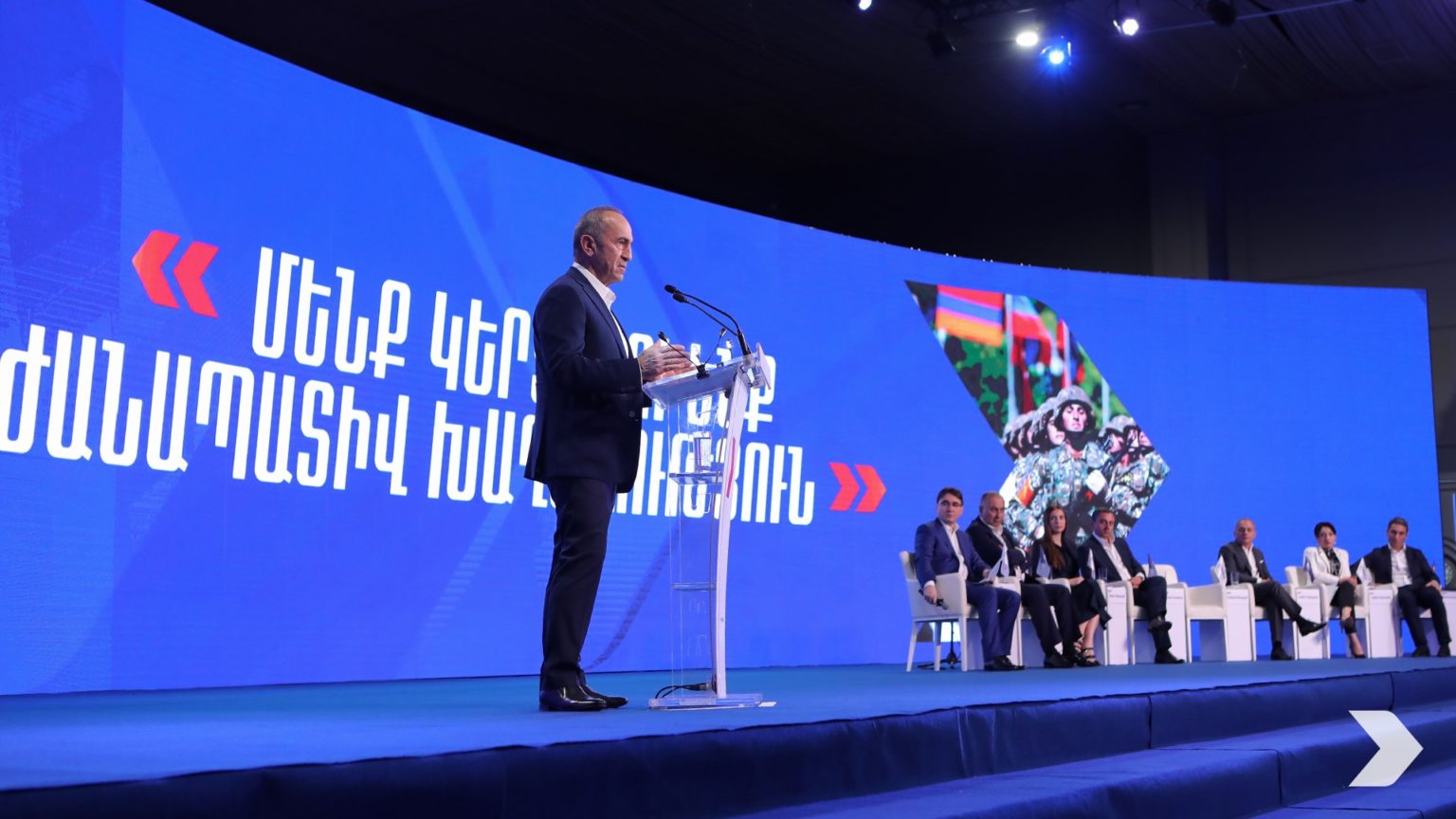 The political coalition “Hayastan Dashinq” (hereinafter “Armenia Alliance”) held its founding ceremony in Yerevan, Armenia on May 9, 2021 with the signing of a memorandum of understanding between Armenia’s former President Robert Kocharyan, Ishkhan Saghatelyan on behalf of the Armenian Revolutionary Federation-Dashnaktsutyun (ARF-D) and Vahe Hakobyan representing the Syunik-based “Veradznovgh Hayastan” or Reborn Armenia Party. The Armenia Alliance is guided by their adopted slogan “Towards a strong Armenia.”

Following the formation of this coalition, the Armenia Alliance recently presented its detailed electoral platform and program. This article serves to summarize the main points of the electoral platform which consists of 17 topic sections and 178 points ranging from domestic politics, social-economic issues and foreign policy. The Armenia Alliance published its full list of candidates, which represent 40-percent Kocharyan candidates, 40-percent ARF-D candidates and 20-percent Reborn Armenia candidates. Thirty percent are women as mandated by Armenia’s constitution.

The Armenia Alliance seeks to develop strong national-state interests, pursue a foreign policy aimed at fortifying Armenia’s national security and ending the socio-economic decline. The Armenia Alliance supports pursuing high levels of development, preventing a new wave of mass emigration and creating the necessary foundation for a lasting just peace in the South Caucasus region. The Armenia Alliance also supports maintaining the territorial integrity and self-determination of Artsakh, defending and protecting Armenia’s borders, fighting corruption, improving the quality of public life and supporting the activities of the Armenian Apostolic Church.

The Armenia Alliance proposes constitutional amendments to consolidate the checks and balances system between different institutions and branches of government such as the Presidency, National Assembly and the Executive Government. The Armenia Alliance states that these internal controls will diminish monopolies of power by any one political faction on state institutions and pave the way for political diversity with the ultimate purpose of creating strong and healthy government institutions.

To have a strong Armenia, the Armenia Alliance believes that the government must strengthen its national security apparatus, defense institutions such as both the military and security council and reinvigorate its overall defense strategy and capabilities. Further, Armenia must re-adopt the “nation-army” strategy so that the country can defend its national interests. The Armenia Alliance program proposes measures to defend against foreign manipulation, disinformation and fake news as part of the overall defense strategy.

The Armenia Alliance emphasizes the importance of Armenia-Diaspora relations and the need to restore mutual trust and create partnership on national issues concerning both the Diaspora and Armenia. As such, the trust towards the “Hayastan All Armenian Fund” must be restored and further there will be special projects implemented to encourage the repatriation of talented experts from the Diaspora to Armenia.

A healthy social environment requires the implementation of socio-economic reforms addressing health care, social welfare, economic regulation, nationwide development, upgraded transportation systems and agricultural reforms. The Armenia Alliance states that the government must provide social benefits and health care to disabled people and financial assistance to families with more than one child. To ensure economic equity, the government must encourage a just and transparent regulatory system that will encourage investments and prevent monopolies, while promoting sustainable development projects especially in the field of environment and agriculture. Further, the Armenia Alliance will reestablish a dedicated Ministry of Agriculture—a noteworthy initiative since the Ministry was abolished by the current administration despite the sector accounting for 25-percent of the GDP. The Armenia Alliance also supports fair growth and nationwide development around Armenia with a focus on establishing an accessible and modern healthcare system and a transportation network and agricultural programs that reach rural communities especially in border provinces (Syunik and Shirak), as well as the city of Gyumri.

Moreover, Armenia must expand its exports and turn the “made in Armenia” slogan into a national strategy and promote Armenian products outside its region. For this purpose, the quality of Armenian products must increase, and Armenia must search for new markets in the Gulf states, China, Africa and the European Union.

The Armenia Alliance’s program highlights the concept of “Digital Armenia” and places a high value on digital and electronic trade with the goal of negotiating with multinational corporations and establishing the use of electronic payment systems such as PayPal, Google Pay, Apple Pay and Samsung Pay to subscribers in Armenia. The Armenia Alliance promises to bring $500 million worth of direct foreign investments in the first year and three billion dollars in the coming five years, by attracting investments from the Gulf states and Eurasian Economic Union countries.

Foreign policy proposals set out by the Armenia Alliance emphasize a balanced proactive approach based on a multipolar world order that requires engagement with both regional and international forces and actors. The policy statement is contrary to the propaganda and unsupported accusations that the Armenia Alliance seeks to create one-sided foreign policy or be “guided by the Kremlin’s interests.”

To achieve “dignified peace,” the Armenia Alliance insists that Armenia needs a balanced foreign policy agenda that will establish good relations with its neighbors. To manage the geopolitical challenges, Armenia needs to cooperate with its regional allies and partners. As a matter of national security, the Armenia Alliance also rejects the psychology of defeatism and affirms with its carefully managed foreign policy that Armenia can restore its position in the region. By creating a just and dignified peace settlement and with the opening of economic and communication links, the Armenia Alliance argues that a positive and lasting regional stability can be achieved for all.

The Armenia Alliance pays special attention to Armenia’s role in regional transport routes and addresses Armenia’s role in the International North-South Transport Corridor. According to the program, Armenia can become an important transit hub in the region connecting the Persian Gulf to the Black Sea and playing a crucial role in the newly-established Silk Road. For this purpose, the Armenia Alliance will seek to attract investments for completing the construction of north-south highways connecting Armenia both to Georgia and Iran. The Armenia Alliance also suggests coordinating with Iran and Georgia on energy issues where Armenia can export its electricity surplus to neighboring countries. The Armenia Alliance values Armenia’s strategic relations with Iran and gives special attention to the Meghri free-trade zone between Armenia and Iran which may facilitate trade between the Gulf and the Black Sea ports. The program also mentions that Armenia can be an aviation and air transit center for the Arab states. The program additionally highlights that Armenia as a landlocked country (member of UNESCAP) must lobby for the rights of countries that have no access to seas and oceans.

As for Artsakh, the Armenia Alliance proposes that the Organization for Security and Cooperation in Europe (OSCE) Minsk Group must reactivate its role as mediator to facilitate dialogue between the conflicting parties, secure Artsakh’s self-determination, restore its territorial integrity and guarantee the land corridor connecting Armenia and Artsakh.

Finally, the Armenia Alliance specifically mentions that Armenia must not only advocate for recognition of the Armenian Genocide, but also vocally advocate for the prevention of new genocides and similar crimes worldwide. Furthermore, the Armenia Alliance states that preserving Armenian cultural, religious and historical heritage sites currently outside of its borders will be a priority for Armenia and promises to raise this cause with international organizations.

The parliamentary electoral process requires explanation of the technicalities so that the reader may understand the election more fully. The upcoming June 20 parliamentary snap elections mandate that individual political parties, alliances (such as the Armenia Alliance) or a coalition (consisting of no more than three parties/alliances) garner 54-percent of the seats in parliament in order to elect their prime minister and form a government. In addition, a single political party must obtain a minimum of five-percent of the vote to win seats and enter parliament; a coalition of two parties must obtain a minimum of seven-percent of the vote to win seats and enter parliament. There is a possibility that if no party or coalition obtains 54-percent of the seats within six days after the election, there will then be a run-off election between the top two parties and/or alliances. Based on this electoral procedure, this election process may continue beyond June 20.

Armenia is entering an uncertain phase challenged by domestic and regional developments. Domestically, the current reality reflects the likelihood that a single political party or alliance will not be able to form an absolute parliamentary majority and government.  Therefore, there will be a coalition government in Armenia that aligns two or a maximum of three parties. Armenia’s constitution specifically limits the number of parties in a coalition in order to ensure a minimum level of government stability. That said, the present political situation will lead to a coalition government with differing factions involved in an ongoing political compromise within Armenia’s National Assembly as well as the government. However, in the aftermath of the 2020 Artsakh War, political pluralism and the end of one-party rule is necessary and a healthy development for both the National Assembly and Armenian society as a whole. This political evolution may further facilitate the checks and balances system between different institutions while also possibly stagnating certain political and socio-economic reforms.

The Armenia Alliance has a unique and value-based domestic agenda, which if implemented, can lift Armenia from its economic isolation, and with the careful management of geopolitical interests, make it an attractive digital IT hub in the region. Unlike other political alliances and parties, the Armenia Alliance has the unique advantage and support of the ARF’s global network as well as the sophisticated foreign policy experience of Robert Kocharyan, who served as Artsakh’s first president and Armenia’s second president. This combination will serve to ease the Turkish-Azerbaijani pressure on Armenia and convince Armenia’s regional partners, (Russia and Iran) and international powers (China, India and the European Union) to strengthen Armenia’s position as a transit corridor between the East and West, North and the South. The strength of the Armenia Alliance will reflect on Armenia’s geopolitical position and provide Yerevan with the leverage and trust to improve its position when addressing Armenia and Artsakh’s national security.