Taner Akçam: ‘Based on the New Documents, it is Now Very Difficult to Deny the Armenian Genocide’ 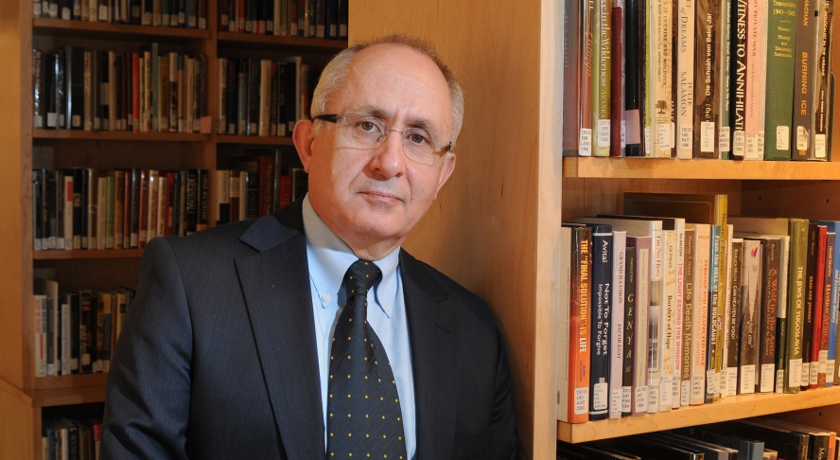 The Last Brick in the Denialist Wall: Akçam Speaks with the Armenian Weekly on His Latest Discovery

WATERTOWN, Mass. (A.W.)—As Armenian communities around the world marked the 102ndanniversary of the Armenian Genocide, a recent revelation by Turkish historian Dr. Taner Akçam has become a central topic of discourse, covered by major news outlets and publications. Akçam—aptly named the “Sherlock Homes of the Armenian Genocide” in a recent New York Times article—has been studying the genocide for years by compiling documents from around the world to combat the Turkish states’ denial.

According to Akçam, his recent discovery—which is he refers to as the “smoking gun” and one of the “last bricks in the denialist wall”—proves the Ottoman government’s awareness of and involvement in the annihilation of the Armenian population. The discovery of these documents was made after they were believed to have vanished following World War I .

The document, acknowledged as authentic by the postwar Ottoman government, helped convict its author, Behaeddin Shakir, one of the founders of the Committee of Union and Progress (CUP), as one of the masterminds of the Armenian Genocide.

On May 11, the Armenian Museum of America and the National Association of Armenian Studies and Research (NAASR) will present “The Story Behind: ‘The Smoking Gun’,” a presentation of these never-before-seen-documents by Akçam. For the first time, this and other documents will be discussed in public.

The Armenian Weekly recently caught up with Dr. Akçam ahead of his Boston-area talk, to discuss his recent discovery and its significance in combating the Turkish denial of the Armenian Genocide.

Below is the interview in its entirety.

Dickran Khodanian: You have called the discovery of the telegram “the smoking gun,” one of the “last bricks in the denialist wall.” What makes this piece of evidence more significant than other proofs that were available in the past?

Taner Akçam: This evidence enhances the evidence that has been compiled over the years. One of the most important sources of the Armenian Genocide is the military tribunal records in Istanbul. Historian Vahakn Dadrian has used these tribunals to break through Turkey’s denialist wall and has used them extensively. However, the evidences from the Court were constantly criticized because they were not the originals.

In fact, when Guenter Lewy published his book entitled The Armenian Massacres in Ottoman Turkey: A Disputed Genocide, he discredited court martial materials with the argument that we do not have the originals since they don’t exist.  In the book, he writes, “the most serious problem affecting the probative value of the 1919–20 military court proceedings is the loss of all documentation of these trials. This means that we have none of the original documents, sworn testimony, and depositions on which the courts based their findings and verdicts,” (p. 80).

And now we have the original documents with official letterheads that have been deciphered with a certain coding system. The coding system allows for us to authenticate letters that are either related to the killing or the killing operation. It is a major blow to the denialist argument. I will continue to publish more of these kinds of documents from court martial tribunals because it is a very strong addition to the existing scholarship.

D.K.: You have mentioned that you uncovered the document from the nephew of an Armenian Catholic priest, Krikor Guerguerian. Can you provide some background on this? How were you able to finally secure the document?

T.A.: The document is in the private archive of Armenian Catholic priest Krikor Guerguerian in New York. The original document is in Jerusalem Armenian Patriarch’s archive and Guerguerian had visited this archive in the 1960s and had filmed all the materials.  It is a very well known document and has been published several times in the form of quotations. In the main tribunal of Istanbul in 1919-1921, it was quoted extensively! Dadrian personally visited Jerusalem and was in contact with Guerguerian; he used this specific telegram and made references to Guerguerian and Jerusalem Archive in his footnotes.

More importantly, the Armenian Assembly microfilmed the entire Guerguerian archive in 1983. These archives have been available since 1983, but nobody could look extensively because there was no proper cataloging system. There were maybe hundred of rolls of microfilm and it would have been almost impossible to go through each roll to find this document. The existence of Guerguerian Archive and copies in the Assembly was public knowledge among scholars. When I first came to the United States in 2000, I approached Guerguerian’s nephew and asked for his permission to look at the originals that are held by him in New York. He rejected, since the materials were all microfilmed in Washington. In 2015, I called the nephew again to ask for permission to see the original materials and this time he allowed me.

D.K.: Could there be more materials to discover?

T.A.: There are still a lot of other materials to discover. This will be one of the main issues I will address in my presentation on May 11. We have several original materials from the Istanbul Tribunal that we know ended up in the archives in Jerusalem and Guerguerian’s personal archives.

In the 1940s, while Krikor Guerguerian was doing research on the extermination of the religious clergy during the Armenian Genocide for his Ph.D in Cairo, he met a former Ottoman judge who was a member of the Istanbul military court tribunal following WWI. The judge told Guerguerian when he was the presiding judge of the court martial, the Armenian Patriarchate was the official representative of the Armenians during the trial. They were given legal rights to have access to the court material and as a result he allowed them to take the court material.

The judge also told Guerguerian that in 1922 Zaven [Der Yeghiayan] Patriarch in Istanbul transferred the materials to Europe, first to Marseilles, then to Manchester, Britain, and then eventually ending up in the Jerusalem archives. So in the 1960s, Krikor Guerguerian went there and took pictures everything. 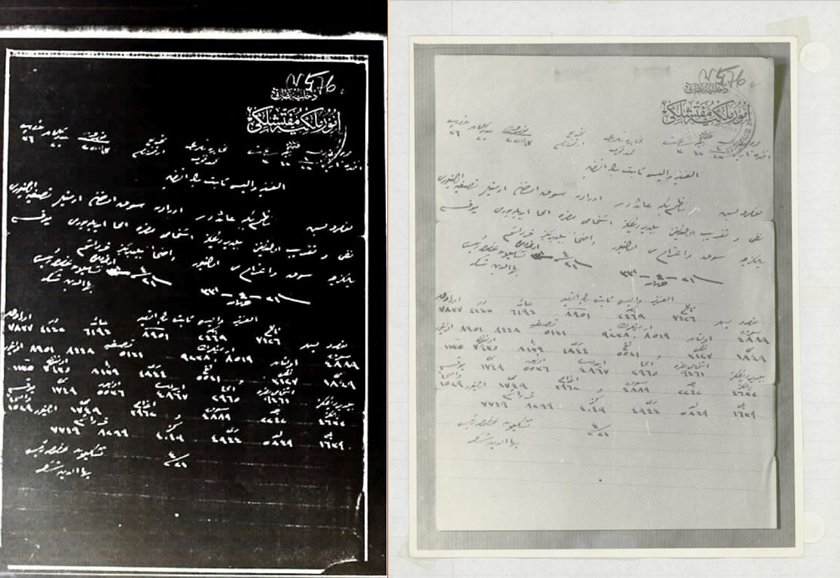 According to Akçam, his recent discovery—which is he refers to as the ‘smoking gun’ and one of the ‘last bricks in the denialist wall’—proves the Ottoman government’s awareness of and involvement in the annihilation of the Armenian population. (Photo courtesy of Taner Akçam)

D.K.: What has made your discovery different? You have mentioned to other publications that you do not believe that this latest discovery will lead to any immediate changes in Turkey’s stance on the issue. Why do you think that is?

T.A.: The important discovery I made is the coding system as well as revealing that the document has an Ottoman letterhead. The Turkish authorities will not be able to claim that it is not authentic. The coding system on the telegram is irrefutable and shows the authenticity of this document.

Today, in the Ottoman Archives, there are hundreds of documents, mainly in the form of telegrams coming from provinces to Istanbul. These are all coded in Arabic numbers. Four or five digit numbers denote each word or plural endings or suffixes. When these coded telegrams arrived Istanbul, the officials wrote the equivalent words or endings on top of each number groups. This is how we are able to read these documents today. I compared the coding system in Bahaettin Şakir’s telegrams with those in the Ottoman archive and I found a match.

Nobody could claim that this telegram is not authentic. Now, the Turkish government has to find an explanation because this argument of “show the original” is not valid. We have the original. They have cornered themselves with their own argument.

I am sure they will continue to deny the genocide because denialism has nothing to do with academic research; it is a political problem. My argument is that based on the new documents, it is now very difficult to deny the Armenian Genocide. The arguments that they have been bringing up over the years will no longer work. Therefore, they will have to resort to something new.

D.K.: Are historians not allowed to research at the archive in Jerusalem?

T.A.: Yes, scholars do not have access. I was declined over the years several times. I had wanted to check Krikor Guerguerian’s material to see whether he really filmed everything. I couldn’t get access. And they have a standard answer: “We are in the process of cataloging,” I am not sure whether this is true. There is no specific reason to my knowledge for why historians do not have access to the archives in Jerusalem. I don’t want to speculate on this.

D.K.: You will be in Watertown, speaking at the Armenian Museum of America on May 11. Tell us a little about what you will be covering during your talk.

T.A.: My presentation on May 11 will mainly be about the contents of Krikor Guerguerian’s archives that are related to the materials of the Istanbul military tribunal. There are a lot more materials in the archives but I will only focus on the tribunal and the materials that were collected during this time.

Taner Akçam is the Robert Aram and Marianne Kaloosdian and Stephen and Marian Mugar Chair in Armenian Genocide Studies at Clark University.