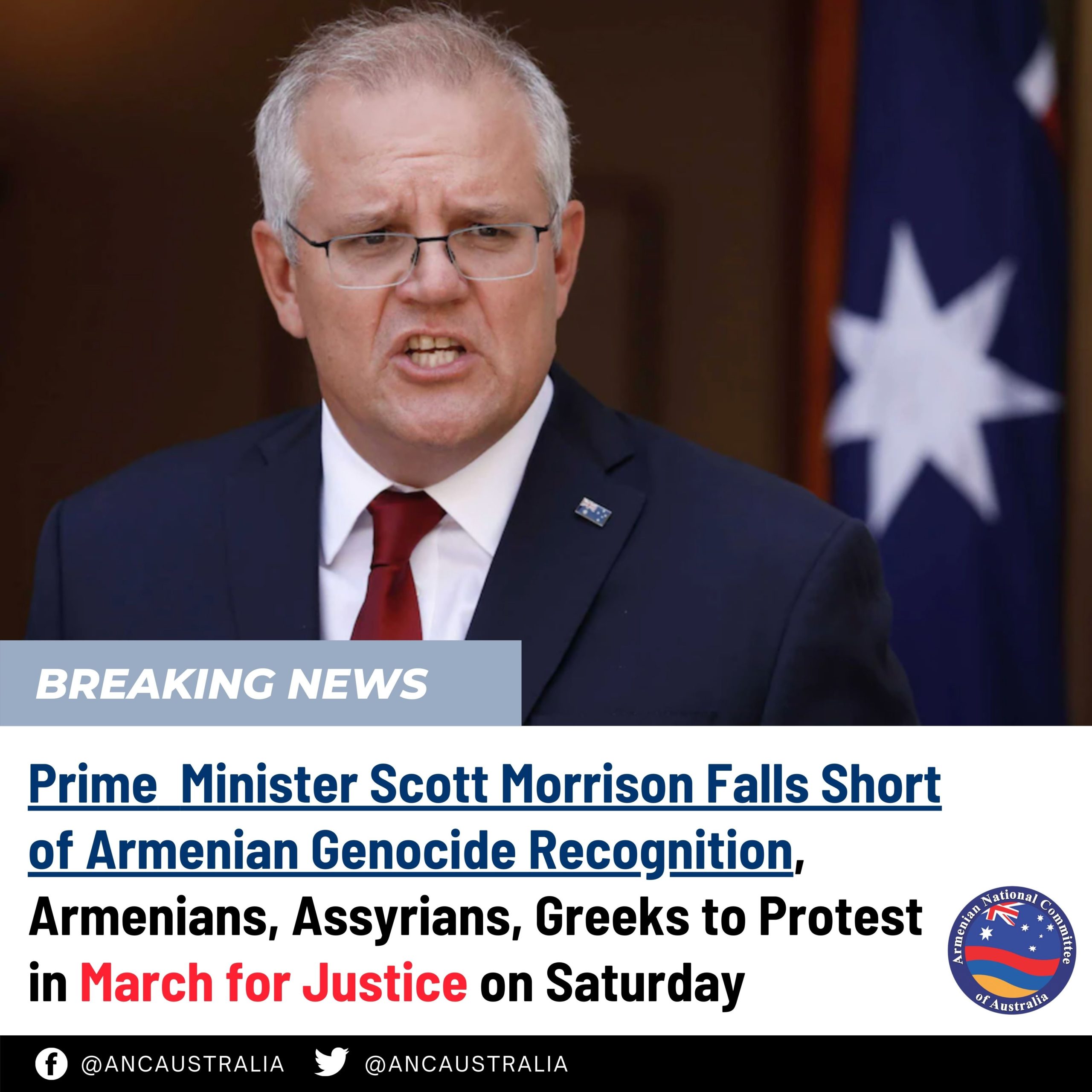 Australia’s Prime Minister Scott Morrison has once again fallen short of calling the Ottoman Empire’s mass murders of the Armenians, Assyrians and Greeks as genocide, as descendants of the communities prepare to March for Justice under the banner of #SpeakUpScoMo in Sydney and Melbourne on Saturday 24th April 2021, reported the Armenian National Committee of Australia (ANC-AU).

His letter went further than the one that caused great offence to the community in 2019, when he referred to the Armenian Genocide as “horrors that befell the Armenian people”.

This time, Prime Minister Scott Morrison conceded the Armenians suffered “enormous loss”, referring to “the tragedy of dispossession, deportation and death” and he referenced the eyewitness accounts of Australian prisoners of war, which “stirred outpouring of material and practical support from Australia” including “to the Australasian Orphanage in Antilyas, Lebanon”.

However, Prime Minister Morrison’s failure to correctly characterise 1915 as genocides ensures Australia remains behind over 30 nations, including the United States Congress, as President Joe Biden looks set to ensure his Administration joins his parliament in correctly referring to the Armenian Genocide in his widely anticipated statement this weekend.

ANC-AU Executive Director, Haig Kayserian said that what effectively amounts to the continued appeasement of genocide denial as outlined by Prime Minister Morrison’s statement will be the focus of the discontent set to be communicated by the Armenian-Australian, Assyrian-Australian and Greek-Australian communities, who have joined forces under the Joint Justice Initiative brand to lead their communities in protest marches in Sydney and Melbourne on Saturday 24th April 2021 and to continue to lobby for recognition of the genocides.

“While we appreciate Prime Minister’s recognition of Australia’s first major international humanitarian relief effort to aid the victims of 1915, his failure to call a genocide by name is unacceptable to our communities,” said Kayserian.

“The Prime Minister acknowledges there was dispossession, deportation and death suffered by the Armenians, which led to this relief effort, but his failure to call out the Armenian Genocide means these crimes were not committed based on the grounds of race.”

“This defies logic, considering the scholar who coined the term genocide, Professor Raphael Lemkin himself said he was motivated by the crimes committed against the Armenians and the Jews when concluding a term and legal convention was required to stop the cycle of genocide,” Kayserian added.

On Friday 23rd April 2021, an unprecedented number of Australian politicians offered messages supporting Federal recognition of the Armenian, Assyrian and Greek Genocides for the 106th Anniversary Commemoration, which was live streamed online.

Minister Paul Fletcher continued his steadfast support calling for national recognition of the Armenian Genocide by the Government in which he serves, Premier Gladys Berejiklian similarly declared she was hopeful Australia will be the next country to join the side of truth and justice on this issue, as did federal parliamentarians Adam Bandt – Leader of The Australian Greens, Member for Berowra Julian Leeser, Member for Goldstein Tim Wilson, Member for Hunter Joel Fitzgibbon, Senator Andrew Bragg, Senator Eric Abetz, Senator Kristina Keneally,  Member for Mackellar Jason Falinski MP, Member for Reid Fiona Martin, Member for Macarthur Mike Freelander, Member for Macnamara Josh Burns, Member for Bennelong John Alexander, Member for North Sydney Trent Zimmerman and Member for Adelaide Steve Georganas.

On 20th April, the New South Wales Jewish Board of Deputies passed a motion joining their peak Executive Council of Australian Jewry reiterating their call on the Australian Government and all governments to recognise the Armenian Genocide at a plenum held in Sydney titled “Learning from the Holocaust: Why countries should recognise the Armenian, Assyrian and Greek genocides”.

“The evidence is in. Australia has already spoken on the issue of recognition of the Armenian, Assyrian and Greek Genocides. We are just waiting for our Prime Minister and his Government to join us,” said Kayserian.

“We will March for Justice on Saturday, we will continue to protest and advocate while continuing our conversation with our Prime Minister until we achieve recognition and justice in the name of 1.5 million Armenians, and over 1 million Assyrians and Greeks, who lost their lives for no reason other than their faith and ethnicity.