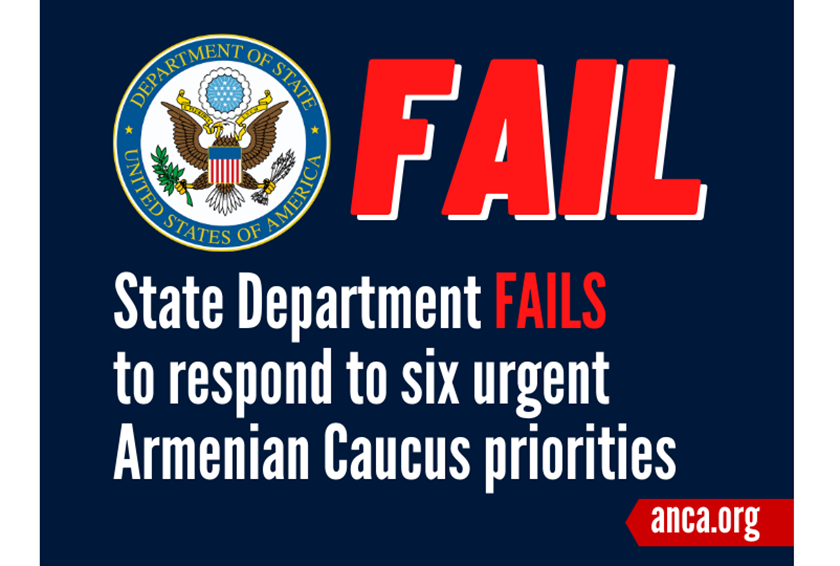 The State Department’s response to a detailed Armenian Caucus letter was unresponsive to six specific policy priorities raised by over 100 Congressional signatories – failing to address or even mention the plight of over 200 Armenian prisoners of war still being held, abused, and killed by the government of Azerbaijan, reported the Armenian National Committee of America (ANCA).

The May 6, 2021 State Department letter, signed by Naz Durakoglu, Acting Assistant Secretary of State for Legislative Affairs, came in response to a February 19, 2021 Armenian Caucus letter outlining a broad range of bipartisan policy concerns. In the months since the Caucus sent this letter in February, it has forwarded two additional Congressional letters to the Biden Administration, the first calling for Armenian Genocide recognition and the second seeking a robust aid package of at least $100,000,000 for Artsakh and Armenia.

The six policy priorities left unaddressed by the Administration’s letter are listed below.

1) Prisoners of War: The bipartisan Armenian Caucus letter stressed that Azerbaijan has refused to free Armenian prisoners of war and apprehended civilians.

The State Department entirely ignores Congressional concern for the release of Armenian prisoners of war, failing, in this letter, to even cite their existence, despite sustained Congressional pressure.

The State Department fails to identify Baku and Ankara as aggressors, choosing instead to speak generically of “last year’s fighting.”

The State Department dismisses Congressional calls for a significant U.S. commitment, citing just $5 million in humanitarian aid it has sent to support affected populations of both Armenians and Azerbaijanis.

The State Department neglects to mention that the White House officially waived Section 907 of the FREEDOM Support Act, and fails to respond to Congressional concerns about withholding U.S. aid to Baku.

The State Department refuses to address Congressional concerns about the foreign mercenaries recruited by Turkey to fight alongside Azerbaijani forces.