Security of Artsakh people will not be compromised: Armenian FM presents stance on Karabakh settlement 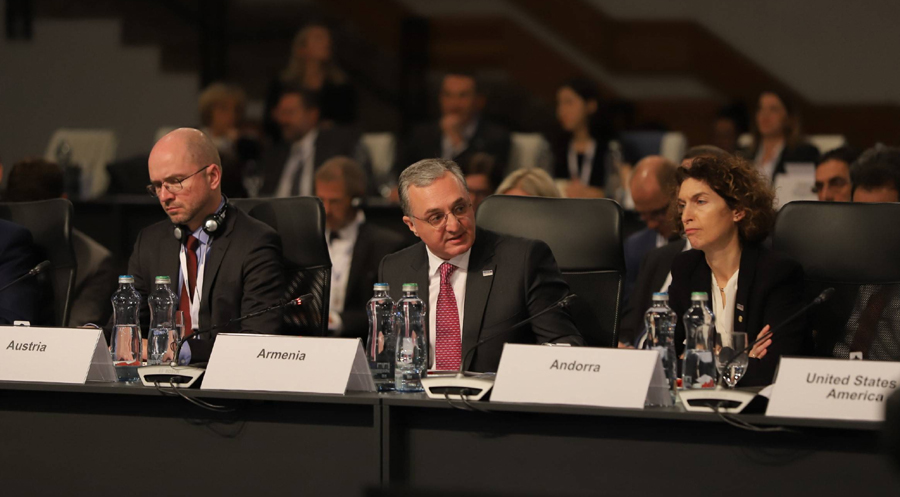 The security of the people of Nagorno Karabakh will not be compromised, and in no circumstances the people of Karabakh should be left without secure lines of defense, Armenian Foreign Minister Zohrab Mnatsakanyan said, addressing the 26th OSCE Ministerial Council in Bratislava.

In the wake of his meeting with Azerbaijan’s Foreign Minister Elmar Mammadyarov, Zohrab Mnatsakanyan outlined the position of Armenia on the key aspects of the peaceful settlement of the Karabakh conflict.

First, he said, there is no alternative to a peaceful settlement of the conflict within the OSCE Minsk Group co-chairmanship, which is internationally mandated and supported.

“Second, the inalienable right of the people of Nagorno Karabakh people to self-determination represents a fundamental principle and foundation for the peaceful resolution,” Minister Mnatsakanyan stated.

“The recognition of this principle not to be limited in the scope of determination for the final status of Nagorno Karabakh must be clearly and unequivocally accepted. The term without limitation clearly implies also the right to maintain and determine a status outside the jurisdiction, sovereignty or self-determination of Azerbaijan,” the Foreign Minister stated.

He added that the persistent hostile policies and actions of Azerbaijan, including the recent aggression against Nagorno Karabakh in April 2016, emphasize the illegitimacy and impossibility of claiming jurisdiction by Azerbaijan over the people of Nagorno Karabakh.

“Fourth, the peaceful settlement should be inclusive by directly engaging all parties to the conflict. Therefore, Nagorno Karabakh through its elected representatives should be a direct party to a negotiating process. In this respect we emphasize the necessity of full engagement of the elected representatives of Artsakh in the peace process, particularly on issues of substance,” the Foreign Minister added.

He noted that the government of Armenia will never engage in any activities that could violate the right of the people of Nagorno Karabakh to freely determine their political status or can deprive them of the ownership of this process.

“Fifth, the peaceful settlement cannot take place in an environment of tensions and risks of escalation. Therefore, the 1994 and 1995 agreements on ceasefire concluded between Azerbaijan, Nagorno Karabakh and Armenia should be strictly adhered to and strengthened,” the Foreign Minister stated.

According to him, risk-reduction mechanisms, including  OSCE mechanisms investigating ceasefire violations and monitoring the ceasefire regime, including by way of expanding the Office of the Personal Representative of the OSCE  Chairman-in-Office, should be implemented.

Sixths, he said, the basic principle of non-use of force should be unconditionally adhered to. “The policies of hatred, intolerance, xenophobia, Armenophobia instigated and directed by the leadership of Azerbaijan should be denounced. Efforts should be reinforced to prepare populations for peace and to establish an environment conducive to peace,” Minister Mnatsakanyan said.

“Seventh, the maximalist positions of Azerbaijan, which ignore the will and sensitivities of the people of Nagorno Karabakh are fundamental obstacles to a meaningful progress in the peace process. The inability of the authorities of Azerbaijan to reciprocate a call for a compromise by Armenia is a point in case,” he added.

Zohrab Mnatsakanyan reminded that the Prime Minister of Armenia demonstrated strong political will in announcing that any settlement should be acceptable to the people of Armenia, Artsakh and Azerbaijan, which is to say that the settlement can only be based on a compromise.

“Armenia remains engaged in good faith in the negotiating process and will continue to consistently work towards the peaceful settlement. At the same time it is unacceptable that in the light of the present domestic political developments in Azerbaijan the latter sets preconditions of the peace process as manifested in a position paper circulated on the eve of this Ministerial Council. Armenia rejects such a non-constructive approach,” Minister Mnatsakanyan stated.

Finally, he said, “in the past month we demonstrated a modest and yet important example of confidence-building between all the parties to the conflict. The exchange of journalists between Armenia, Nagorno Karabakh and Azerbaijan is a promising example of building trust and inclusive dialogue between the parties at the public level. We are ready to further build on this example.”

Also, he said, the relatively low level of violence along the line of contact and the international border, as well as the use of direct communication line should be sustained and enhanced.

“However, we remain seriously concerned that despite these measures there have been losses and injuries, which could have been avoided,” Minizter Mnatsakanyan added.

“Delivering on commitment is a key to building trust towards the prospects for the final settlement of the conflict,” the Foreign Minister concluded.